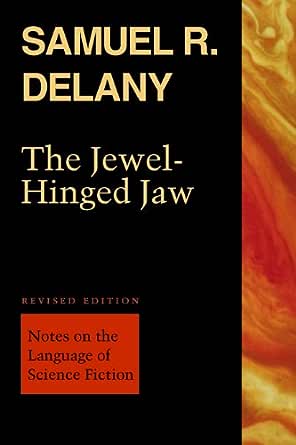 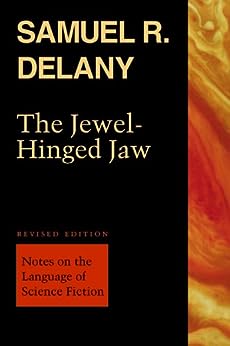 The Jewel-Hinged Jaw: Notes on the Language of Science Fiction (English Edition) Kindle-editie

"Delany's first work of non-fiction, The Jewel Hinged Jaw: Notes on the Language of Science Fiction, remains a benchmark of sf criticism thirty-three years after its initial publication in 1977. ... Extensively revised and reissued in 2009, JHJ has become even sronger, containing twelve essays in ten chapters and two appendixes."--Isiah Lavender, Science Fiction Studies

"I re-read The Jewel-Hinged Jaw every year as a source of guidance, as a measure of what all criticism and literature should aspire to be, and as a challenge for those of us who want to write."--Junot Díaz, Pulitzer

Patrick Shepherd
4,0 van 5 sterren On Display: The Guts of Science Fiction
21 augustus 2009 - Gepubliceerd op Amazon.com
Geverifieerde aankoop
When this was first published in 1977, there was very little first-rate critical analysis of science fiction, or even much analysis of any degree of excellence. Delany, as part and parcel of his young career as a science fiction writer, who by the time of this book had already published several novels, from fair to outstanding in quality (Nova, The Einstein Intersection, Babel-17, The Jewels of Aptor, The Fall of the Towers), also did some deep delving into just what science fiction is, what makes it tick, what makes for good sf, what many of the common failings of sf are, why sf is distinct from mundane fiction. This work is significant in that it helped raise the consciousness level of sf within the hallowed halls of academia while at the same time raised the bar for working sf writers, forcing them to really look at both the how and why of what they were writing.

This particular edition (2009) is an updated version of the original publication, and there are changes to its contents to include some later essays and deleted some others as they were available in other Delany books on writing, in addition to changing their order to be more subject oriented rather than chronological. These changes do not detract from the overall character of this book, and you can still derive a sense of just where the sf world was in the late sixties and early seventies from this.

This is not a book for the faint of heart whose eyes glaze over at the first polysyllabic word, as this work is absolutely replete with them. Nor is it a book for the average fan of sf, who just wants his sense of wonder tickled and doesn't care to investigate just how this sense of wonder is created and refined. But for those willing to work a little bit while reading this, some of what is here is quite illuminating. The book is composed of several essays, some short, some quite long ("On Reading the Dispossessed" runs to some 60 pages). Some of the essays seem to wander quite far from their nominal subject, as parenthetical asides, but usually by the end of the piece the reason for the asides will become strikingly clear. Part of those asides are some expositions from Delany's life, and form an interesting composition in their own right about how a writer's life experiences influence what and how that writer writes. While this aspect of writing has frequently been the subject of much critical work on major mundane writers, Delany eschews much of this when trying to define and analyze particular sf writers and their works, focusing much more on the details of the written work, sometimes down to individual word choices and the resonance/discordance such choices invoke (such as Heinlein's "The door dilated"), although he does acknowledge in several places that his own upbringing and his environmental surrounds influence how he reads and interprets other's works.

But there is also evidence of just how young Delany was when he wrote some of these pieces, as there is a certain level of arrogance and conceit in his statements of what is good and what is not, along with a certain obsessiveness with details that are really not that important to the overall scheme of things. This is quite marked in his long dissertation on Ursala K. Le Guin's The Dispossessed, where he starts by dissecting the opening paragraph of the book. For the sentence "Where it [the wall] crossed the roadway, instead of having a gate, it degenerated into mere geometry, an idea of a boundary." he states quite flatly that "this is mere fatuousness. If there is an idea here, degenerate, mere, and geometry in concert do not fix it". This comes across as Delany trying to impose his own rules of stylistic excellence on another writer, as to me this particular line by Le Guin is exactly what sets both a tone and that feeling of 'other' so essential to a science fiction novel. In fact, the entire dissertation on Le Guin's book comes across as overly harsh, though Delany clearly does point out some things in the book that were either not well thought out or not presented as clearly as they could have been. And perhaps his detailed analysis of all of the failings of this book were prompted by his sense that Le Guin's book was both important and a major milestone in the evolution of sf, that poorer works were not worthy of this level of analysis.

But throughout this work, you can get a sense of the passion Delany has for excellence in the arts, and why such analysis is both important and can help future work be all the better. Much of sf today has been colored and influenced both by his own works of fiction, and by his insights into what makes science fiction so essentially different from mundane works, insights that are well presented in this work.

lucifer's shadow
4,0 van 5 sterren Not just for academics. The writing guide that could be a little more accessible.
24 augustus 2013 - Gepubliceerd op Amazon.com
Geverifieerde aankoop
Samuel R. Delaney, while well known among scholars of the SF genre, perhaps falls short of the same fame we accord to such greats as Isaac Asimov or Robert Heinlein. The reason is right in his subtitle, the language he uses perhaps making him more comparable to a James Joyce than the usual suspects of what is usually considered pulp fiction. In William Gibson's foreward to a recent edition of Dhalgren, he makes the common comment that he wishes he understood this novel, but just can't get there. Dhalgren is rich in its use of language, and the novel where Delaney comes closest to Joyce, but this collection of essays may seem dense at times to the average reader as well. He'll get right down to the syntax and even linguistic possibilities of certain uses of language in SF, forcing the reader to perhaps revisit what he or she knows of lit crit, like that old bugaboo Derrida. Otherwise, there are some little gems someone with ambitions for writing in the genre can take away.

The best advice Delaney gives an aspiring writer comes in something he shares in his writing process. He'll talk about trying to get at the right words he wants for a scene. There is the door. The character is pushing against the door or perhaps the character is creaking open the door...it goes on like this until Delaney fleshes out the scene he's seeing in his mind. This is the best moment in the book. He'll talk about having to widen his vision, to get completely and utterly immersed in the "vision" in his head of the scene he's attempting to describe. This notion of the kind of vision one needs in order to provide a well written scene is indescribably good advice. Ever since I read it, I've been using the idea of this widening of vision and it has helped my own writing tremendously. There are other instances like this among the essays. If you can get beyond the lit crit, there's a lot to be learned from this great writing master. Glimpses into his personal life (like Delaney had a wife and son?) along with his other opinions on things that makes for a good read. Just be prepared for the occasional hesitation, almost like stubbing your toe on the living room coffee table, pausing you to contemplate the meaning (not just of pain), so it's worth it, even if you have to swim in clouded pools. But isn't it good to be challenged by something you read? Especially if it yields things that may change your own writing life!
Meer lezen
Een iemand vond dit nuttig
Vertaal recensie in het Nederlands

Sandy
4,0 van 5 sterren Great Author!!
3 oktober 2012 - Gepubliceerd op Amazon.com
Geverifieerde aankoop
This was a gift for a boyfriend. He loved it and the copy i got was signed by the author. Not a big science fiction fan but if you are this is a must read type of book.
Meer lezen
2 mensen vonden dit nuttig
Vertaal recensie in het Nederlands
Ga naar Amazon.com om alle 4 recensies te bekijken 4,4 van 5 sterren
Terug naar boven
Over ons
Verkoop bij ons
We helpen je graag
© 1996-2020, Amazon.com, Inc. en dochterondernemingen