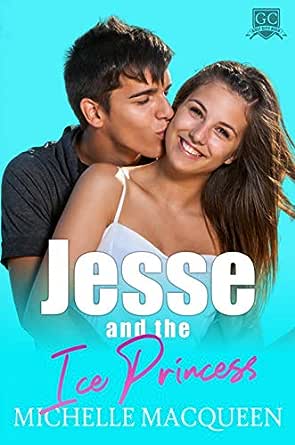 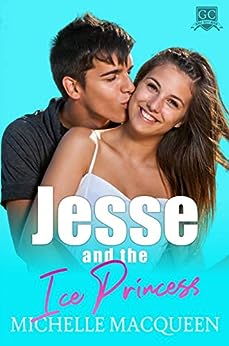 Rule #1 of the Gulf City High hockey team: Don’t date the coach's daughter.
Not like Charlotte Morrison will ever speak to Jesse Carrigan, let alone date him.
The coach's only daughter is a robot. At least, that’s what they call her. Robot, Ice Princess… it all means the same thing: she won't lose sight of her figure skating goal no matter what it costs.

Even if her dad’s team needs her.

Even if the captain of said team learns her biggest secret.

That the ice princess has game.

And Jesse has to know more. He wants her to teach him, to teach the team how to fix their zero-win record.
As those icy walls of hers start to thaw, Jesse realizes he needs her out there on the ice with him, skating next to him where she belongs.
But she’s been a figure skater her entire life. How does hockey fit into her life of competitions?
Maybe the game isn't the win he needs.
After all, hockey is just that--a game.
And Charlotte Morrison? She is life.
The only problem? She skates on the outside of his world, and he isn't sure how to make her see they belong on the same ice.

Beware of Zamboni shenanigans, adorable siblings taking care of each other, lots of hockey playing madness, and a sassy girl who goes after what she wants.

Lillian @ Mom with a Reading Problem
5,0 van 5 sterren Can Jesse thaw the Ice Princess?
7 januari 2020 - Gepubliceerd op Amazon.com
***I received an advanced copy of this book from the author. This does not affect my opinion of the book or the content of this review.***

Jesse and the Ice Princess by Michelle MacQueen is the first book in her new series Gulf City High, and it is a delightful read! I read it in one sitting, not wanting to miss a minute of Jesse and Charlotte’s story.

Charlotte Morrison is the hockey coach’s daughter and a competitive figure skater. She doesn’t have time for friends or fun. Her determination and one-minded focus has led to her unfortunate nickname: ice princess. Charlie hates this nickname. Her shyness coupled with her lack of social life has her labeled a snob, a mean girl that thinks she’s better than everyone else. But that’s not Charlie and she doesn’t know how to change that persona or if she really cares to.

Jesse Carrigan is the hockey team captain and school’s golden boy. Everyone wants to be Jesse and the girl’s want his attention. But Jesse’s school life and home life couldn’t be more different. After his mother’s death two years prior, his dad has retreated into work, leaving Jesse and his sister (who suffers from extreme social anxiety) to raise their younger twin brothers. I love Jesse. Never once does he complain about his lot in life. Instead you see a young man completely comfortable in his role as caretaker. It’s this trait that leads him to see through the ice built around Charlotte.

The plot of this one centers around Charlotte and Jesse. Jesse’s team is not known for winning, and just once before they graduate, he’d like to see them win. After seeing Charlotte playing on the ice with her friend, he knows how they’ll win. He needs the ice princess to come teach the team her moves. It’s convincing her of this that is the problem. I love the complexity of the plot here. While it seems straightforward, MacQueen delves deeper into Charlie’s actions and the motives behind them. In this short novel, the character’s development is beyond expectations as Charlie learns to adapt to new situations and stand up for what she wants.

Overall, I really loved Jesse and the Ice Princess. This is the first contemporary from the author I’ve read (I have read her fantasy novels under her pen name M. Lynn), and it won’t be the last. If you enjoy sweet, YA contemporary, I highly recommend it.

Mary
4,0 van 5 sterren "Jesse and the Ice Princess" Are Going Change It Up...
25 januari 2020 - Gepubliceerd op Amazon.com
Indeling: Kindle-editie
Reviewed By: LMR
She's labeled Ice Princess, As Her Schedule keeps Her Isolated & Alone~
That's the PRICE She's paying for Work'n to be the BEST!
Jesse is labeled King, As He's the Hockey Captain & popular with EveryOne~
But that's NOT what His Real life is Actually like!
"Jesse and the Ice Princess" are wearing Masks...
And only a handful of people get to see the TRUE Side of "Jesse and the Ice Princess."
HowEver, that's about to Change...
As He's gonna ask Her to Help the Team to WIN,
Which is gonna bring "Jesse and the Ice Princess" CLOSER...
And Change Perceptions about "Jesse and the Ice Princess!"
I was granted, via B00|{$P®0UT, an ARC of Michelle MacQueen's "Jesse and the Ice Princess (Gulf City High Book 1)." I recommend this book to others based upon its own merits. All opinions expressed within this review are uniquely my own & freely given!
Until next time... Happy Reading!
My Rating Sytem:
4: I like IT a lot. Great, Solid Story w/ few if any inconsistencies or errors. This is a HIGH Rating, & I rarely give OUT a Higher Rating.
If My Review is helpful to you, please check the box below~ Thank You.

BookNerd
5,0 van 5 sterren Another Sweet Romance from Michelle MacQueen!
4 februari 2020 - Gepubliceerd op Amazon.com
Indeling: Kindle-editie
Charlotte-or Charlie-loves both hockey and figure skating. However, she knows she can't do both and has already chosen to pursue figure skating. She gives it her all and with a perfectionist mom, there isn't any room for error. Because of this, she doesn't have time to waste on things like hanging out with friends and going to parties. Her peers have given her the nickname "Ice Princess" and she hates it. Especially when the perfect Jessie Carrigan says it.

With Jesse's mom gone and his dad busy with work, Jesse has taken it upon himself to help out at home. This includes cooking dinner, making sure everyone stays in line, and helping his sister out with her social anxiety. He's passionate about hockey, but the school's team hasn't won a single game. When he sees Charlie playing hockey with her friend, he knows the team needs her. However, she's the coaches daughter and completely off limits.

Jesse is persistent about getting Charlie to help the team. When he gets her in trouble at school, she has no choice but to help out them out, much to her dad's surprise. Slowly, Charlie learns that not everything is about being the best figure skater. There are more important things than going through life as a robot and she has Jesse to thank for that.

JESSE AND THE ICE PRINCESS is a contemporary romance that also shows the little thing in life can be the most important. Charlie is stubborn, but even she can't help but fall for Jesse's charm. He's just the sweetest and shows her all the possibilities of who she can be. I love the incorporation of hockey and figure skating because it brings in a bit of action and keeps the pace of the plot up. Michelle MacQueen steals my heart with another sweet romance that I could reread again and again.