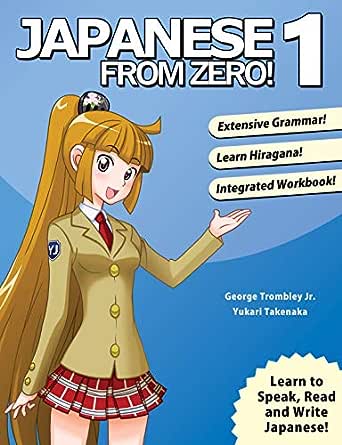 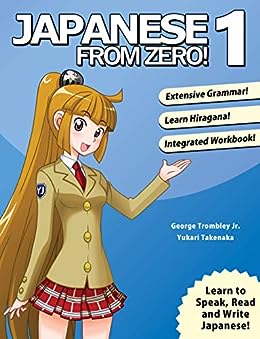 Japanese From Zero! is an innovative and integrated approach to learning Japanese developed by professional Japanese interpreter George Trombley and co-writer Yukari Takenaka. The lessons and techniques used in this series have been taught successfully for over ten years in classrooms throughout the world.Using up-to-date and easy-to-grasp grammar, Japanese From Zero! is the perfect course for current students of Japanese as well as absolute beginners.In Book 1 of the Japanese From Zero! series, readers are taught new grammar concepts, over 800 new words and expressions, and also learn the hiragana writing system. Features of Book 1: * Integrated Workbook with Answer Key * Over 800 New Words and Expressions * Learn to Read and Write Hiragana * Easy-to-Understand Example Dialogues * Culture Points about Japan * Bilingual Glossaries with Kana and Romaji ...and much more!

Japanese From Zero! is an innovative and integrated approach to learning Japanese developed by professional Japanese interpreter George Trombley and co-writer Yukari Takenaka. The lessons and techniques used in this series have been taught successfully for over ten years in classrooms throughout the world. Using up-to-date and easy-to-grasp grammar, Japanese From Zero! is the perfect course for current students of Japanese as well as absolute beginners. In Book 1 of the Japanese From Zero! series, readers are taught new grammar concepts, over 800 new words and expressions, and also learn the hiragana writing system. Features of Book 1: * Integrated Workbook with Answer Key * Over 800 New Words and Expressions * Learn to Read and Write Hiragana * Easy-to-Understand Example Dialogues * Culture Points about Japan * Bilingual Glossaries with Kana and Romaji ...and much more!

Nico van Vliet
5,0 van 5 sterren Great way to learn Japanese
2 februari 2017
Indeling: Kindle-editieGeverifieerde aankoop
This is a very good book and a very good teacher.
Use this in combination with the yesjapan website.
Trombley combines this with tons of video's on youtube.
He bases te course on years of experience.
Pragmatic and slow-paced approach

Melissa M
5,0 van 5 sterren Without a doubt, the best Japanese language books for self-learners or homeschoolers
15 februari 2018 - Gepubliceerd op Amazon.com
Geverifieerde aankoop
My teen son has been homeschooled since eighth grade. One of his main interests in languages. In his first couple years of homeschool, he attempted to learn Japanese using Rosetta Stone (he went through the full first level and most of the second), by using the first Genki book and workbook, various other beginner books (as I scroll through the popular books on Japanese language in Amazon, I see we now own many of the titles...), and by doing a few other things like us just going through flashcards of hiragana and katakana.

Partway through last school year (Jan 2017), he told me he feels like he's learned a lot of Japanese, but said he felt he wouldn't be able to put together even the simplest sentence - written or spoken - if he was put to the test. As with all things homeschool, there's some trial and error, and we occasionally try something that doesn't work. This was definitely one of those things. I knew he was frustrated, but not at all ready to give up.

We came across Japanese From Zero! Book 1. When he started using that first workbook and discovered the hundreds of free videos the author, George Trombley, put on YouTube, I mean, this kid was transformed. He ate that book up, and book 2. By the end of that school year (June 2017) he'd gone from saying he couldn't say "How are you?" to being comfortable enough to converse with teens in Japan. In the summer he completed book 3. This school year (starting September 2017) he began Japanese From Zero! 4 and Kanji From Zero! 1, and he's working his way through both now. He keeps up with the supplemental videos from George. When George asks a question, I'm continually impressed at how my son replies correctly, without fail, before George supplies the answer.

My son just asked me what I was doing, and I told him I was typing up a review for these books -- he said I should say he doesn't feel he started actually learning Japanese before he opened the first from Zero! book.

These books and the free supplemental videos are by far the best system we've found for any English speaker who wants to learn Japanese.

UPDATE MAY 2019:
My son graduated homeschool Spring 2018. He asked if he could take a placement test for Japanese at the university he was planning to attend. Recall he’d only gone through George Trombley’s Japanese From Zero! books 1-4 plus Kanji from Zero! book 1 and the free YouTube videos. From the placement test, he was put in 3rd semester Japanese. He likely tested into 4th semester, but as 4th is only offered each Spring, he was happy to go into 3rd semester.
And how did he do? He got a 4.0 in Japanese both semesters. Each class was worth 5 credits, and he was given an additional 4 credits for each class he skipped because of the placement test, so he ended up getting 18 credits as a freshman, just from taking those two classes. The Japanese from Zero system definitely works.
Meer lezen
415 mensen vonden dit nuttig
Vertaal recensie in het Nederlands

Nathaniel
5,0 van 5 sterren Do you want to successfully learn how to speak Japanese?
10 januari 2018 - Gepubliceerd op Amazon.com
Geverifieerde aankoop
Yes! 1,000 times, YES!!! At, least that was my answer. Finding a way to learn Japanese, successfully, was much more difficult than deciding I wanted to learn how. If your journey to find a teaching tool that would work for you is anything like mine was then you've already tried and failed to use other tools.

In October of 2017 my sister and I decided we both wanted to learn Japanese together. So we set off on that journey only to fight with one another over the way to learn it which led us down different paths before finding Japanese From Zero!

Now before finding Japanese from Zero! I had already successfully used RomanianPod101.com to learn how to speak Romanian and I liked the platform quite a bit. So I naturally headed over to JapanesePod101.com and shelled out around $200 for Premium Plus only to find that the language learning tools for Japanese were not very good once you got through the first 10 or so lessons. I had already bought and paid for Memrise ($49.99) which I had used for Romanian and German. So I tried progressing through the Japanese 1 course and what was clearly missing from that experience was context and the practicality of the vocabulary I was learning. The progression markers were encouraging and motivating but it just wasn't teaching me to "speak" Japanese but rather vocabulary and small phrases. I had concurrently used Kana Town to learn both Hirigana and Katakana yet I felt like I wasn't really getting anywhere near learning to "speak" Japanese.

I decided to turn to Youtube for suggestions and it seemed that most people were suggesting utilizing Tae Kim's free grammar and video lessons or Genki. I found these suggestions from people who'd moved to Japan and were there teaching English or as students.

The last thing I wanted was a textbook. I hated the language textbooks I'd used in high school and college and had always found them sorely lacking "real life" or "conversational" teachings. Knowing how Japanese culture has so many formalities, niceties, honorifics, etc I was concerned I'd learn how to speak Japanese like a foreigner from Genki. While Tae Kim's offerings were pretty good considering they were free I struggled to use his material for myself.

It was while I was on Amazon looking at Genki that I came across the Japanese From Zero series. I took a look at the reviews, watched some of Georges videos, and was sure that I had found the resource that was going to work for me. My sister wasn't convinced based on my discovery.

After having spent a few months on and off with Japanese because I was struggling with the tools I'd used I dove in head first into using Japanese From Zero! 1 and it just - worked! It's hard to explain but...I was...actually learning how to "speak" Japanese. Now as someone who had already spent hours and hours memorizing Hiragana and Katakana I wasn't thrilled with the progressive transition from Romaji to kana but had I just started with this it probably would have been so much easier to learn those characters than isolated drilling.

The reason I found Japanese From Zero! 1 to be so much better than all the other resources I'd used is because the book was full of clear explanations about each topic, word, or phrase that was being taught. It seemed like for every question I had about the material the author had anticipated that and had an answer. Unlike the other resources I used I wasn't scouring the internet for clarification about what was being taught.

Even better was finding that Japanese From Zero! has a video lesson that goes with the full book lesson where George helps his students make sure they really understand the topic and then he adds more knowledge and information that strengthens the learners confidence in their Japanese.

I spent an entire weekend working through the first 4 full chapters of Japanese from Zero! 1 and I was actually "speaking" Japanese. I could say real sentences that were conversationally correct and didn't make me sound like I was a foreign learner. Could I walk around in Japan and successfully hold a conversation - no of course not but what I did have was the confidence that with this material, if I stayed dedicated, in the not too distant future I most certainly could.

After that weekend of learning I forced my sister to try Japanese From Zero! 1 with me. We watched a few of George's lesson videos and then I actually taught her, with the Japanese I'd learned from the book, the material I knew. Yes, that's correct I taught my sister Japanese in Japanese.

After that she was convinced and I bought her a book as well.

As you can see I've committed myself to the whole series. I spent $155 after taxes for the five books that you see. When compared with the 2 Genki workbooks and the 2 Genki textbooks with at the time I purchased them were $189 after taxes these felt like a steal.

I'm not sure the author would recommend this but I use Jisho.org for learning the Kanji stroke order and readings of all the vocab that appears in the book. It's amazing how quickly you start learning radicals, stroke order patterns, and general character recognition. I'd say that doing this is a big time commitment and is going well above and beyond the usage of the book. I have the aptitude for it this early in the learning process but not everyone does. So if you find it distracts from Japanese From Zero! then don't use it.

At the end of the day, if you want to learn how to successfully speak Japanese that doesn't make you sound like a language learning foreigner then this is the resource for you!
Meer lezen

Jacob Alex Holton
5,0 van 5 sterren Wow. I love love love this book. It's very effective.
23 september 2016 - Gepubliceerd op Amazon.com
Geverifieerde aankoop
This book is amazing. Coupled with videos online, the material is properly paced to learn the right things in Japanese without burning you out. The book doesn't milk the simple stuff though. You go through material pretty quickly. I now know all the hiragana and katajana and some kanji. The book also explains grammar in the most amazing way. It just makes sense. I cannot wait to move on to the next book (I'm over halfway). I have studied more because the book makes so much sense. It's kind of addicting... Have fun and totally buy this book. You will not regret it!
Meer lezen