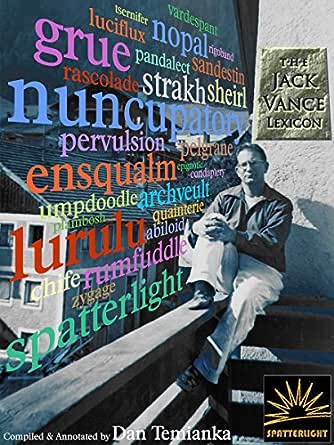 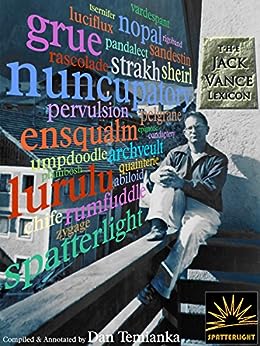 Jack Vance is a Science Fiction and Fantasy Writers of America Grand Master, and winner of numerous sci-fi and fantasy awards spanning a 60-year career. His unparalleled knack for coining words is recognized among the traits which delight his readership.

In 1992, Daniel Temianka compiled Vance's neologisms to date and published these in the Underwood-Miller first edition of 'The Jack Vance Lexicon, from Ahulph to Zipangote'. The 'Lexicon' had limited distribution and has become something of a Holy Grail for Vance collectors, rare copies changing hands only occasionally, for tidy sums.

After the first 'Lexicon' Jack Vance wrote three major novels and an autobiography. In this second edition, now titled 'The Jack Vance Lexicon, from Abiloid to Zygage', Dan Temianka and a host of tireless Vance scholars close the work with another 160 entries, revising and re-indexing the 1800 items from the first edition. The 'Lexicon' is the ultimate Jack Vance reader's companion, available now conveniently to all as a Spatterlight ebook.
click to open popover

navynut
5,0 van 5 sterren A rich science fiction vocabulary.
27 augustus 2016 - Gepubliceerd op Amazon.com
Geverifieerde aankoop
This is a true gem of a book both for Vance lovers and those who inventive language for its own sake. jack Vance's use of unique words and names made his fiction truly different from anyone else in the field of fantasy or science fiction (with the exception of JRR Tolkien). I had always hoped that someone would catalog all of Vance's unique terms and Mr. Temianka has done so admirably.

The unique vocabulary of Vance gives one the feel of the way a future human race would evolve, especially if separated by vast interstellar distances. The various linguistics make Vance's divergent human cultures all the more realistic. Besides listing where the word or term comes from, the author also gives some background from the particular book or story regarding the word in question. One of my favorite Vance novels is the Gray Prince which I read in college. The term aurau is used and is described as untranslatable but refers to primitive revulsion against civilized restrictions. The word itself was used in the context of the novel so seamlessly, that I found myself completely taken by it and to this day occasionally use it myself.

This volume does more than list an imaginary vocabulary, it lends great insight into the magnificent creations of Jack Vance's future histories. Whether it's the Gaen Reach, Alastor Cluser of the Oikumene, Vance has a word for every story that is distinctly his own. If you plan on delving deeply into the late great master, this book is as essential as the Guide to Middle Earth. Highly recommended!

D. Allen Schaeffer
4,0 van 5 sterren A fun adjunct to you your Vance collection.
10 juni 2016 - Gepubliceerd op Amazon.com
Geverifieerde aankoop
It's an impressive effort, truly. A lot of fun for the Vance fan. And it gives ideas where to go next in Vance's vast body of work, no small thing considering his huge authorial output over the years. Vance's unique gift and propensity for creating neologisms in his work makes this book, well, almost necessary. Especially since Vance had an equally vigorous ability to create new words that actually make sense - that look and feel like real words you know. Many was the time in my early readings of Vance that I went to multiple dictionaries to find the word he just used wasn't there...or anywhere...other than the novel or story I'd been reading. "Nuncupatory." "Chife." "Monstrament." The list is long enough, well, to fill a book. And it has.

But...it's not perfect. There are numerous inconsistencies, and even some (minor) inaccuracies that rankle. These are difficult to understand, considering the fact that it's an effort by Vance fans, for Vance fans. I'm going to cop out and say I can only recall one, but it appears throughout the book: Numerous numbers are given as being in the Dirdir language, when, in the passage where they appear in THE DIRDIR, Adam Reith is considering the unnamed common language used by all humans on Tschai. One could assume that this is Dirdir, knowing humans were brought to Tschai by that race, but it's unlikely and certainly not specifically stated. I've been through THE DIRDIR twice, and nowhere is it even suggested, to my way of thinking, that Reith is considering Dirdir. The passage discusses how there are haunting similarities between this unnamed language and some human tongues. The implication, to this reader, it that it is related to whatever proto-tongue the humans of 50,000 years ago spoke when the Dirdir rounded them up. If I'm wrong, please point it out - I don't want to seem pedantic about it - but it seems an even more tenuous association to me than the idea that Phung are just tall, cranky Pnume. Further evidence for the fact that it's not Dirdir-language is indicated by the fact that the Chasch, Chaschmen, Wankhmen, Pnume and Pnumekin all speak this same tongue. Those alien races (and their "sub-men") all have a mostly antagonistic relationship with the Dirdir, and the Dirdir by no means dominate the planetary culture. Anyway, enough of that.

As far as "inconsistencies," entries are sometimes accompanied by (lengthy) quotes, sometimes brief and dictionary-style. While this is to some degree necessary (Vance sometimes overtly defined a word, sometimes left it to the reader to interpret via implication and context, and sometimes was purposely vague, the unknown word providing a feeling of organized strangeness that gave the reader a glimpse of an alien culture that was fully and deeply realized yet beyond the reader's full understanding), sometimes Temianka voices guesses as to the meaning, sometimes not, and is sometimes frustratingly broad. The musical instruments of the planet Sirene are an example of the latter - the definitions just mention them as a musical instrument and include brief excerpt of Vance's physical descriptions of them without mentioning they are used specifically by the Sirenese. While one COULD assume that such instruments are not merely native to that planet, the story implies heavily that this is not the case, especially in the early part of "The Moon Moth" where Thissel comically misinterprets a passage about the Sirenese using "a musical instrument" to accompany all speech to mean they use A musical instrument, rather than dozens to convey mood, social status, nature of the conversation, etc.), the book would have been helped considerably by a more consistent voice and method of definition. This is puzzling considering that this is a "revised" edition of the original "LEXICON."

There I went and harped on the cons. The book is mostly one big pro...for the Vance fan. If you're new to Jack Vance, definitely let the man speak for himself for a while. I'm only(!) at about 4000 ppg of Vance, so I'm hardly a Universal Expert (see what I did there?), but I'm no Tarn Bird, either....and I think I'm at just the perfect depth of immersion in his work to get the most out of this book. For a fan to put together something like this is truly a massive undertaking, and it's a hell of a lot of fun to flip through in between novellas and short stories, or while waiting in the lobby of the local nympharium with a glass of Blue Ruin close to hand. But the lack of consistency in the way the entries are handled and, as I said, some minor errors, keep me from going the full five stars.
Meer lezen
Een iemand vond dit nuttig
Vertaal recensie in het Nederlands

Tomw
4,0 van 5 sterren For the Jack Vance fan
16 oktober 2016 - Gepubliceerd op Amazon.com
Geverifieerde aankoop
This is a dictionary of the words Jack Vance made up during his career.
Meer lezen
Vertaal recensie in het Nederlands

Gene Lancour
5,0 van 5 sterren Like Johnson, a necessary dictionary.
26 juni 2016 - Gepubliceerd op Amazon.com
Geverifieerde aankoop
If you are a Vance fan (as I plainly am, even in my own writing), this is indispensable to keep track of what is what and where to find it!
Meer lezen
Vertaal recensie in het Nederlands
Ga naar Amazon.com om alle 6 recensies te bekijken 3,9 van 5 sterren
Terug naar boven
Over ons
Verkoop bij ons
We helpen je graag
© 1996-2020, Amazon.com, Inc. en dochterondernemingen