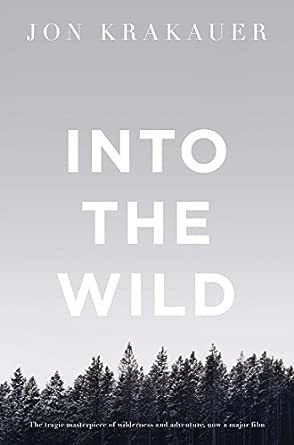 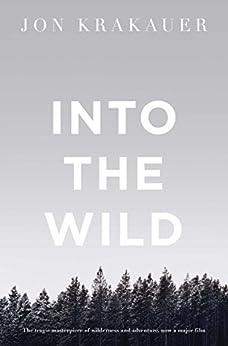 Jon Krakauer's Into the Wild examines true story of Chris McCandless, a young man, who in 1992 walked deep into the Alaskan wilderness and whose SOS note and emaciated corpse were found four months later, internationally bestselling author Jon Krakauer explores the obsession which leads some people to explore the outer limits of self, leave civilization behind and seek enlightenment through solitude and contact with nature.

A 2007 film adaptation of Into the Wild was directed by Sean Penn and starred Emile Hirsch and Kristen Stewart.

Film tie-in edition of the true story of Chris McCandless, who in 1992 walked into the Alaskan wilderness, and whose SOS note and emaciated corpse was found 4 months later
Alle bekijken

Amazon Customer
1,0 van 5 sterren Wasted time.
20 januari 2019 - Gepubliceerd op Amazon.com
Geverifieerde aankoop
This book although eloquent and detailed is a waste of time and effort. Nothing is to be gained from reading it except seeing the foolishness of eccentric brilliant individuals. Five minutes in the Bible is worth more than five years in this book.
Meer lezen
29 mensen vonden dit nuttig
Vertaal recensie in het Nederlands

Tracey Fifer
5,0 van 5 sterren Great Biography
11 augustus 2016 - Gepubliceerd op Amazon.com
Geverifieerde aankoop
This book gave a great insight of the path Chris McCandless's troubled life took.
I watched the movie "Into The Wild" a few years back and have always been curious and saddened to think about Chris's journey. This book seemed to clear the story a bit. Sometimes I had a lump in my throat thinking that this is not a "character" in a made up story but a real life that seemed to yearn for a peace that only existed in his heart. Jon Krakauer does a great job of giving us a key hole view of "Alex's" life. The good times even when he had nothing. I personally feel like unfortunately Chris was a troubled individual weather it was mental imbalance or emotional disconnect and after this book I feel so sad for his torment. The movie left me disliking his parents, but this book turned that emotion completely around. And I loved the Epilogue. Thank you Jon Krakauer for that. If the movie intrigued you most definitely read the book.

"Into the Wild" is the story of Christopher McCandless and his unique journey into the depths of the Alaskan wilderness. Krakauer makes you really empathize with the troubled young protagonist, and does an excellent job balancing the narrative with his own personal anecdotes. It is abundantly clear that the author is well-versed in both the story and the whole hiking/outdoors culture, and his knowledge helps add to the book. The writing is very direct, but still managed to capture my emotions and keep me engrossed in the story. The story itself would be incredible without all these other elements, but I really felt like Krakauer's talents elevated the book from just an interesting account to a fantastic piece of literature.

Even though the book was suggested to me because of my love of hiking, I found that the human element of "Into the Wild" was what kept me reading and enjoying it. Overall, you'd be hard pressed to find a better piece of nonfiction out there.

Doreen Appleton
4,0 van 5 sterren Bizarre
26 september 2018 - Gepubliceerd op Amazon.com
Geverifieerde aankoop
Unsettling story of a brilliant but eccentric young man, who, after graduating summa cum laude from Emory University, burned all his money, abandoned his family, hit the road as a wanderer (“Alexander Supertramp”) and ended up dead of starvation in an abandoned bus deep in Alaska.
Opinions differ as to his lack of preparedness, his impulsiveness, his sanity. Most Alaskans dismiss him as a greenhorn who got what he deserved. Some allow that he showed considerable courage.
Krakauer identifies with him and even goes so far as to bore us with his own early adventures, which is uncalled for.
In the end we really don’t understand how a rational person, however young, could behave in this way. His actions are not those of a normal person, but rather a person with a character disorder.
And there are grounds for this. His discovery that his father had two families and had lied to him all his life was what set him off. It could be argued that the unconscious motive behind his crazy peregrinations was revenge.
Freud tells us that the ego could ever muster enough hate for itself to commit suicide, but the hate has to be directed outside at someone else and then turned against the self.
In this case his father and the family he abandoned contemptuously. “They’re a bunch of idiots.”
This is one explanation, not the only explanation. McCandless was a complex character, full of contradictions that ultimately cost him his life.
Meer lezen
12 mensen vonden dit nuttig
Vertaal recensie in het Nederlands

Whether you think the subject of this novel died due to his own stupidity and hubris or of a simple mistake while he was making a noble, philosophical pilgrimage, this book is gripping and fascinating.
Meer lezen
21 mensen vonden dit nuttig
Vertaal recensie in het Nederlands
Ga naar Amazon.com om alle 2.781 recensies te bekijken 4,3 van 5 sterren
Terug naar boven
Over ons
Verkoop bij ons
We helpen je graag
© 1996-2020, Amazon.com, Inc. en dochterondernemingen