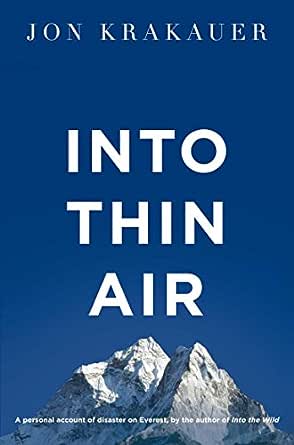 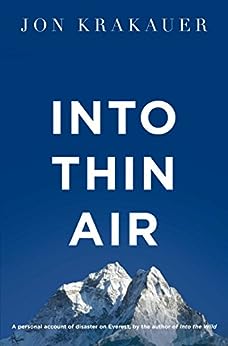 Into Thin Air: A Personal Account of the Everest Disaster (English Edition) Kindle-editie

"... he has produced a narrative that is both meticulously researched and deftly constructed. Unlike the expedition, his story rushes irresistibly forward. But perhaps Mr. Krakauer's greatest achievement is his evocation of the deadly storm, his ability to re-create its effects with a lucid and terrifying intimacy." --Alastair Scott, The New York Times Book Review "This is a great book, among the best ever on mountaineering. Gracefully and efficiently written, carefully researched, and actually lived by its narrator, it shares a similar theme with another sort of book, a novel called "The Great Gatsby." --The Washington Post "Into Thin Air ranks among the great adventure books of all time." --The Wall Street Journal "Krakauer is an extremely gifted storyteller as well as a relentlessly honest and even-handed journalist, the story is riveting and wonderfully complex in its own right, and Krakauer makes one excellent decision after another about how to tell it.... To call the book an adventure saga seems not to recognize that it is also a deeply thoughtful and finely wrought philosophical examination of the self." --Elle "Hypnotic, rattling.... Time collapses as, minute by minute, Krakauer rivetingly and movingly chronicles what ensued, much of which is near agony to read.... A brilliantly told story that won't go begging when the year's literary honors are doled out." --Kirkus Reviews "Though it comes from the genre named for what it isn't (nonfiction), this has the feel of literature: Krakauer is Ishmael, the narrator who lives to tell the story but is forever trapped within it.... Krakauer's reporting is steady but ferocious. The clink of ice in a glass, a poem of winter snow, will never sound the same." --Mirabella "Into Thin Air is a remarkable work of reportage and self-examination.... And no book on the 1996 disaster is likely to consider so honestly the mistakes that killed his colleagues." --Newsday "A harrowing tale of the perils of high-altitude climbing, a story of bad luck and worse judgment and of heartbreaking heroism." --People "In this movingly written book, Krakauer describes an experience of such bone-chilling horror as to persuade even the most fanatical alpinists to seek sanctuary at sea level." --Sports Illustrated

Jon Krakauer's Into Thin Air is the true story of a 24-hour period on Everest, when members of three separate expeditions were caught in a storm and faced a battle against hurricane-force winds, exposure, and the effects of altitude, which ended in the worst single-season death toll in the peak's history.

In March 1996, Outside magazine sent veteran journalist and seasoned climber Jon Krakauer on an expedition led by celebrated Everest guide Rob Hall. Despite the expertise of Hall and the other leaders, by the end of summit day, eight people were dead. Krakauer's book is at once the story of the ill-fated adventure and an analysis of the factors leading up to its tragic end. Written within months of the events it chronicles, Into Thin Air clearly evokes the majestic Everest landscape. As the journey up the mountain progresses, Krakauer puts it in context by recalling the triumphs and perils of other Everest trips throughout history. The author's own anguish over what happened on the mountain is palpable as he leads readers to ponder timeless questions.

One of the inspirations for the major motion picture Everest, starring Jake Gyllenhaal and Keira Knightley.

Amazon Customer
5,0 van 5 sterren Great read
11 november 2015
Indeling: Kindle-editie
Krakauer's account of the 1996 Everest disaster is hard to put down. Despite the story understandably requiring some climbing jargon, his writing style flows effortlessly; guiding you through the harrowing ordeal and out the other side where you can hardly believe what you've just read.
Meer lezen
Nuttig
Commentaar geven Misbruik melden
Vertaal recensie in het Nederlands
Alle 1 klantenrecensies bekijken
Klantenrecensie schrijven

And You May Find Yourself
5,0 van 5 sterren A case of murderous reportage
27 mei 2018 - Gepubliceerd op Amazon.com
Geverifieerde aankoop
Into Thin Air s such a riveting read that it deserves five stars, and a permanent place on my overcrowded shelves.

However, I must note that the book itself - or rather, the Outlook article which was responsible for Krakauer's presence on this expedition in the first place - is the real reason so many people died on the mountain that day. Had the expedition leaders not been competing for the attention of Outlook readers, this probably would not have happened; they were seasoned veterans of the mountain and would not, I am sure, made such an elementary mistake as not turning back by the agreed hour. This proved fatal for several people. Krakauer, to his eternal shame, tried to blame this debacle on the other group's Russian guide. Who, as he admits, went out in a blizzard on his own to save his clients and brought them down single-handed. And showed a lot more empathy than Krakauer himself.

That said, I have read no book on mountaineering that better describes the emotions and physical sensations of being in this punishing environment. f you want a powerful 'Rashomon' tale for our times, read this book in tandem with Anatoli Boukreev's /Weston DeWalt's The Climb. They depict the same story but with a very different perspective, and the story itself never gets anything less than fascinating.

Er Jwee Chiek 余瑞傑
5,0 van 5 sterren Fantastic account of the ascension to 8.8 km above sea levels and the dangers inflicted by acts of God and human error.
21 september 2017 - Gepubliceerd op Amazon.com
Geverifieerde aankoop
Who can better convey the insanity of ascending 8.8 km vertically than a survivor giving us a first hand account? Jon Krakauer brilliantly gave us his poignant and introspective personal experience in Into Thin Air: A Personal Account of the Mt. Everest Disaster, a severe cautionary spotlight on the fallibility of commercialising altitude chasing madness . Beautifully written, a great advantage because Jon is an experienced journalist and he is himself a mountaineering enthusiast. After watching the film version "Everest", Jon's heart wrenching and comprehensive journal filled all the missing gaps the film couldn't convey. The majority of readers, like me, who are weak willed couch potatoes, and who abhor the discomfort of living in nature and physical hardships, can nevertheless appreciate the fleeting joys of mountaineering by these insane and intrepid mountaineers, who must pay the heavy price of excruciating struggle both physically and mentally to attain their egoistical vertical endeavours while leaving behind the filth and corpses marking their passing. Only extreme masochists can overcome the immense hardships and obstacles to attempt, not just climbing mount Everest, but all activities that go beyond the comfort zone of the body's physiology. Many paid the highest price possible, their lives and bottomless sorrow for their relatives. Its interesting that Jon, at the end of his harrowing and heart breaking experience, he did not tell the world to stop climbing to heights where the air is so thin that it does great harm to body. Instead he advocated climbing with the the aid of supplemental oxygen. But ironically, his account of the Everest ascent showed that logistics in getting the oxygen tanks to the climbers are so difficult and can easily go awry. How does one defy Murphy's law when precious lives are at stake under blizzard and subzero conditions? Even when full tanks of oxygen were available, they were mistaken as empty tanks because the brain deprived of O2 for too long cease to function lucidly. Even with survivors from the jaws of Everest, one may end up losing their limbs or other protruding body parts to frostbite. So seriously folks, nothing gets more serious than the question of life or death or courting with the dangerous side of fate. The bottom line to life's pursuits is when we need extra gear to do life threatening stuff that contributes nothing to mankind, it is most certainly nature's way of telling us 'Don't'. Not heeding the risk endanger not only the perpetrator's life but also the lives of others attempting to save him. And please stop defiling Everest. Lets keep nature pristine as it should be.
Meer lezen
22 mensen vonden dit nuttig
Vertaal recensie in het Nederlands

Janice M Garcia
1,0 van 5 sterren What a winer
7 juni 2019 - Gepubliceerd op Amazon.com
Geverifieerde aankoop
Thorough report of a "mountaineer" who did nothing to help fellow climbers, saves himself. I really dont like him after reading other climbing tales. Hes not as good as he lets on and is imo jealous of real mountaineers like Anatoli.
Wish i hadnt gotten his book and wonder why anyone in their right mind would think Krakauer is any more believable than others.
Krakauer saved 0, Anatoli saved 3.
Math is math, numbers dont lie. People do.
Meer lezen
15 mensen vonden dit nuttig
Vertaal recensie in het Nederlands

Hafto
1,0 van 5 sterren If bashing a real-life hero is your thing, this book is for you
11 juli 2019 - Gepubliceerd op Amazon.com
Geverifieerde aankoop
After reading this book and then "The Climb" by Anatoli Boukreev, I am disgusted by the detestable lies Krakauer KNOWINGLY printed in this book. Honestly, it makes me sick to think about it. Krakauer bashed and blamed Boukreev - the legendary hero of the day - who went alone back into the storm at night to save lives while Krakauer sat in his tent and did NOTHING to help ANYONE. This is a level of vileness I am still choking on. And then to top it off Krakauer did nothing but praise Rob Hall - the man who led a bunch of mountaineer novices into volatile weather, with no ropes in place and not enough supplemental oxygen - just to abandon them all. What Hall did to Beck is just horrifying - telling him to wait there for him and then never sending anyone to help him. Never even TELLING anyone that Beck was waiting for him. When Krakauer saw Beck high up on the mountain, frozen and unable to see, and JUST LEFT HIM THERE I just could not believe anyone could actually be that selfish and cruel. Hall and Krakauer left Beck and everyone else for Dead. But they are the heroes and Boukreev, the guy who saved everyone, is the bad guy. Seriously wtf.
Meer lezen
10 mensen vonden dit nuttig
Vertaal recensie in het Nederlands

Felicia Demos
3,0 van 5 sterren Good detail
15 oktober 2018 - Gepubliceerd op Amazon.com
Geverifieerde aankoop
The author writes in great detail without being boring. I got a slight feel for what his experiences were like, although I don’t think anyone will ever truly know unless it’s personally experienced.

However, I rated this as three star simply because I feel the author is condescending and snobby. Yes, he climbed the mountain and very few people will ever even see it, much less climb it.