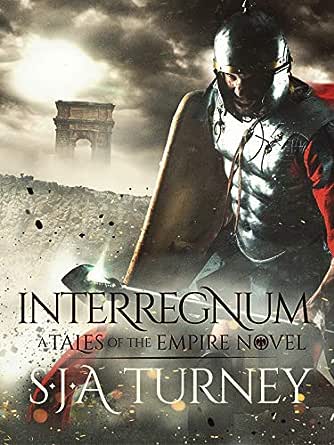 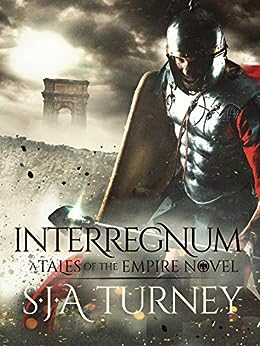 For twenty years civil war has torn the Empire apart; the Imperial line extinguished after the mad Emperor Quintus was burned in his palace, betrayed by his greatest general and oldest friend, Kiva Caerdin.

Against a background of war, decay and violence, men who once served in the proud Imperial army now fight as hands for hire, fodder for greedy lords fighting over the remnants of more glorious times.

Kiva’s memories of the Empire are reignited when fighting alongside a fearsome mercenary unit, the Grey Company. Forced to face a dark and shameful past, he struggles to achieve redemption, and defeat an ancient, cunning and bitter rival. Only then can the Empire be unified... and reborn.

A historical fantasy of valour, honour, and determination against all odds, Interregnum is the first novel in S.J.A. Turney’s epic Tales of the Empire series, perfect for readers of Conn Iggulden, Bernard Cornwell and Simon Scarrow.

William A McLaughlin
4,0 van 5 sterren Fantasy w/o Dragons Empires w/o Mythical Creatures
12 augustus 2013 - Gepubliceerd op Amazon.com
Geverifieerde aankoop
Interregnum by SJA Turney
Mr. Turney enters tentatively into the realm of Fantasy Genre with this novel and series. It is not History but a created world of fiction, Fantasy without wizards, demonic beasties or elves. Thank Goodness, I am tired of Fantastic creatures floating in and out of imaginary world toying with the machinations of man. What we get is intrigue the struggle of Good, Evil and Sanity and Madness. Great honor and deceit battle for control of the world. It is a stronger story line in many ways because it is based on truths in the hearts of man. The characters are solid and well constructed. They are the kind that would stand in a historic novel but this is not a historic world. It is a series I wish to explore more and look forward to "Ironroot" the second novel in this series. Turney shows us the real monsters are deep within us.
Meer lezen
13 mensen vonden dit nuttig
Vertaal recensie in het Nederlands

James Dainis
5,0 van 5 sterren First Rate Historical Roman Empire without Rome
30 september 2013 - Gepubliceerd op Amazon.com
Geverifieerde aankoop
The author says that this in not an historical Roman legion novel but pure fiction. Indeed, that is correct but it reads much like his true historical novels such as "Marius Mules" of that time period. Pure fiction just gives him the license to allow what would be anachronisms to appear - spyglasses, stirrups on saddles, crossbows, etc. and to make up characters and cities out of whole cloth. Nevertheless, one certainly gets the feeling that one is reading about the Roman Empire and the legions.

As for the story, the Empire is in ruins following the death of the last Emperor twenty years previously, leaving no heirs. The last great general of the Imperial army, Kiva, is reduced to leading a mercenary band of twelve of his finest soldiers. They will fight for any lord who wishes to expand on his lands and various vassal states in the former empire. After one battle they find a remarkable young man who is a direct bloodline to the throne.

The astute reader can now assume to know how the plot will develop, but may very well be wrong.
To say that the author introduces various twists in the plot would be an understatement. Rather, the reader occasionally gets a dash of cold water in the face, metaphorically speaking. This all makes for a very engrossing book.
Meer lezen
8 mensen vonden dit nuttig
Vertaal recensie in het Nederlands

Timothy George
4,0 van 5 sterren Excellent, as I am finding all the Turney books
1 augustus 2016 - Gepubliceerd op Amazon.com
Geverifieerde aankoop
Excellent, as I am finding all the Turney books. Thanks so much for the amazing output of inexpensive excellent stories of amazing depth and skill. I have no idea why this author is not selling these for big books and movie rights. Hard to find any better, especially if you are a fan of history. Although this one is not "real" history, it is certainly informed with an intimate knowledge of Rome and other ancient empires.
Meer lezen
3 mensen vonden dit nuttig
Vertaal recensie in het Nederlands

Kindle Customer
5,0 van 5 sterren Excellent Read
10 juli 2015 - Gepubliceerd op Amazon.com
Geverifieerde aankoop
This is a historical fiction with enough research about the fall of the empire and the Roman army during those times to make this an excellent read. If you like plots, twists and turns you'll appreciate what each character brings to the table. The characters themselves are likeable and interesting and you become involved with them. Except for the one person so many people have to overcome. There is intrigue, tactical battle planning and scheming. I very much enjoyed this book as it was hard to put down. If it was true life you'd want these people for friends and that kept me reading into the wee hours of the morning. Suspenful.
Meer lezen
2 mensen vonden dit nuttig
Vertaal recensie in het Nederlands