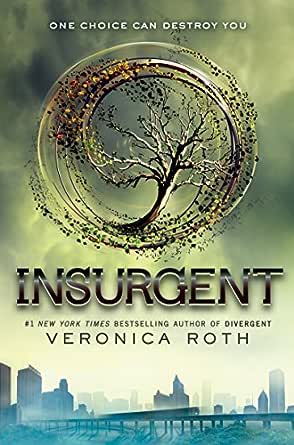 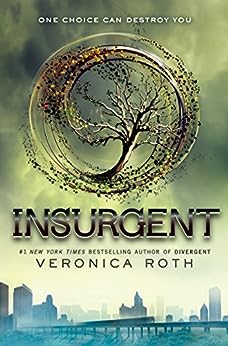 A hit with both teen and adult readers, Insurgent is the action-packed, emotional adventure that inspired the major motion picture starring Shailene Woodley, Theo James, Ansel Elgort, and Octavia Spencer.

As war surges in the factions of dystopian Chicago all around her, Tris attempts to save those she loves—and herself—while grappling with haunting questions of grief and forgiveness, identity and loyalty, politics and love.

The sequel to the }New York Times{ bestseller }Divergent{. In a world that's falling apart, Tris turns to the future in this supernatural fantasy novel. Ages: 13
Alle bekijken

The story gets more complicated and the relationship develops,but at a certain point I felt that it all plateaued in terms of keeping my interest.
There are some logic and moral issues in the story, but you keep reading and don't think so much about it.
I thought it was a bit boring for the first eighty pages. Then, it definitely picked up and I got into the story.
The last 150 pages are very intense. VERY intense.
It was nice to see how Veronica Roth explored so many different characters and relationships and integrated that aspect seamlessly into the non-stop action.
Tris is a teenage girl, trying to make some sense out of the world around her.
Tris's guilt seemed to be overwhelming in the book, but that's probably how we were supposed to feel, like her...overwhelemed.

There are lots of good quotes on the book that will make you smile, laugh, cry(?) or just think about it -

“We share a common enemy, but does that make us friends?”

“Like a wild animal, the truth is too powerful to remain caged.”

Matt
3,0 van 5 sterren Coming of age adventure whose characters start out as heroes and end as pieces in a larger puzzle.
7 november 2014 - Gepubliceerd op Amazon.com
Indeling: Kindle-editieGeverifieerde aankoop
First off, I have to admit that it is difficult for me to rate this book without rating the series as a whole, so that is what I am going to do. It turns out I cannot review this series without comparing it to Hunger Games.

There is a great deal of similarity between this series and Hunger Games. Teenage coming-of-age adventure story in a post-apocalyptic dystopian society. I could go further into the premise, but it really does not make much sense outside the context of the book.

Again, like Hunger Games, I found the first book gripping and devoured it quickly. The second book did a good job of keeping up that pace.

Then the third book comes up, and, once again like Hunger Games, it takes the "Us vs. Them" story and throws in "oh look, These Guys Too! Bet you didn't see THAT coming!" plot hook, and things go off the rails for me. The first two books seem to be building your hope for the characters and the world they live in and the ability for them to make the world better. Then they expand the world, and the third book goes about crushing your hopes of a happy ending.

The real world does not have happy endings for everyone, but this isn't really about happy endings. It is more about building up these characters to great heights with the implication that they will usher in a new age. Then, it turns out in the end they are a cog in a machine in the end. Important, sure, but used to an end just the same.

I would actually rate the first two books at five stars, but the third book is such a letdown that it brings down the whole series for me, and this book is useless without the other two. If you read Hunger Games and loved it, this scratches the same itch. In the end, I didn't hate it, but it lost a lot of luster quickly in the end.
Meer lezen
41 mensen vonden dit nuttig
Vertaal recensie in het Nederlands

INSURGENT begins where DIVERGENT left off with Beatrice “Tris” Prior and Tobias “Four” Eaton, along with Marcus Eaton, Peter Hayes and Caleb Prior, riding the train to an uncertain future in the aftermath of the Erudite simulation induced attack that decimated two of the five factions residing in post-apocalyptic Chicago. Roth’s masterful worldbuilding continues as Tris, Four, and the other survivors seek refuge in Amity, Candor, and amongst the factionless sector, giving readers deeper insight into the dystopian world Roth created in Divergent. As Tris struggles to understand what being Divergent means and how she fits in amongst the factions, Erudite’s ruthless leader, Jeanine Matthews, continues to hunt and kill those who are Divergent because she believes their ability to think independently is a threat to society. Meanwhile, Tris overhears Amity representative Johanna Reyes and Marcus Eaton discussing how the Abnegation leaders died to protect secret information entrusted to them from getting into Jeanine Matthews possession.

As war looms between the factions and their ideologies grow, unexpected alliances form to eradicate Erudite’s iron grip on the city. And Tris will risk everything for the one thing that matters: the truth.

Much like DIVERGENT, I saw the movie first—something I almost never do. But now that I’ve read the book, I was once again pleasantly surprised by how close the studio stuck to the storyline. Packed full of action, danger and underlying conflict, the second book in Roth’s DIVERGENT TRILOGY revolves around rebellion, betrayal, guilt, grief, forgiveness, friendship, love and sacrifice. Even though I knew what was going to happen, the amount of detail and worldbuilding found in the book—as opposed to the movie—made for another highly entertaining, addictive read.
Meer lezen
Vertaal recensie in het Nederlands

Robert Shuler
1,0 van 5 sterren dilemma of fitting into modern world treated by immature author
28 maart 2014 - Gepubliceerd op Amazon.com
Indeling: Kindle-editieGeverifieerde aankoop
The Divergent Series appears to be new mythology in the making, an important dilemma rising to consciousness . . . how to fit into the modern world if you can't just do what your parents did - which has been the human way for thousands perhaps millions of years. Now days careers may last less time than required to pay back student loans!

As important as that is, Roth's writing is unconscious as yet, and after a good beginning in the first novel, she loses focus, her energetic and competent heroine wishes it would all just go away, hiding every chance she gets, diving into physical romantic moments when she should be planning or running for her life, refusing to ever pick up a gun again, and getting her friends killed at such a rate that as one reviewer noted, one wonders if anyone will be left alive at the end. Roth's switch to an "experiment" instead of reality importantly reflects the difficulty of young people today (or anyone for that matter) perceiving reality in a world that changes as fast as the Erudite Sims. So the author gets lost in the problem she has uncovered, fooled by her own Sim, unable to emulate her heroine.

I believe this is immaturity. Roth is still very young, has a following, and might become a great author. Or a hack. Time will tell, and I wish her luck. I will not be reading the 3rd book. My low rating, though, is intended not only to warn readers but to provide needed feedback to the author in the heady sea of success she must be reveling in with a movie and all, not necessarily to discourage. Becoming an author is a good choice for anyone who cannot decide on a practical career (i.e. faction), and is somewhat like Dauntless or Erudite in that few people really succeed at it. So I suspect the story is personal. Maybe next we'll get a series about a heroine that enjoys unexpected heady success?
Meer lezen
10 mensen vonden dit nuttig
Vertaal recensie in het Nederlands
Ga naar Amazon.com om alle 14.429 recensies te bekijken 4,5 van 5 sterren
Terug naar boven
Over ons
Verkoop bij ons
We helpen je graag
© 1996-2020, Amazon.com, Inc. en dochterondernemingen