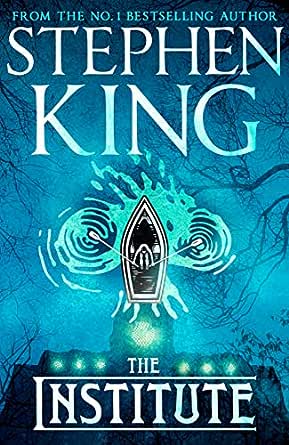 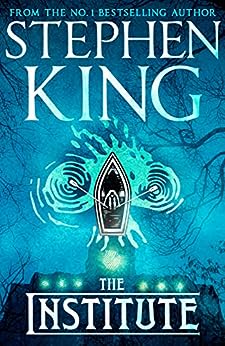 'It does everything you'd expect of a masterpiece - and it is one' Sunday Express
'Hums and crackles with delicious unease' Independent
'A captivating, hybrid novel that shape-shifts through several genres' The Sunday Times

Deep in the woods of Maine, there is a dark state facility where kids, abducted from across the United States, are incarcerated. In the Institute they are subjected to a series of tests and procedures meant to combine their exceptional gifts - telepathy, telekinesis - for concentrated effect.

Luke Ellis is the latest recruit. He's just a regular 12-year-old, except he's not just smart, he's super-smart. And he has another gift which the Institute wants to use...

Far away in a small town in South Carolina, former cop Tim Jamieson has taken a job working for the local sheriff. He's basically just walking the beat. But he's about to take on the biggest case of his career.

Back in the Institute's downtrodden playground and corridors where posters advertise 'just another day in paradise', Luke, his friend Kalisha and the other kids are in no doubt that they are prisoners, not guests. And there is no hope of escape.

But great events can turn on small hinges and Luke is about to team up with a new, even younger recruit, Avery Dixon, whose ability to read minds is off the scale. While the Institute may want to harness their powers for covert ends, the combined intelligence of Luke and Avery is beyond anything that even those who run the experiments - even the infamous Mrs Sigsby - suspect.

Thrilling, suspenseful, heartbreaking, THE INSTITUTE is a stunning novel of childhood betrayed and hope regained.

Mary K.
1,0 van 5 sterren Shut up about Trump
16 september 2019 - Gepubliceerd op Amazon.com
Geverifieerde aankoop
It’s getting old and banal Mr. King. I was hoping to enjoy this book but alas, not to be. A word of advice though... If you continue to write, avoid politics so you don’t alienate half your reading audience because we are after all the force behind your income. Your Trump digs have nothing to do with the story. You're just a sorry old man trying to grand stand. I pick up a book to forget about the trivial day to day political b.s. so why do you feel the need to shove your beliefs down my throat? Wish I could get my money back on this but I won't purchase anything else from this author. I might also add that this book repeated itself over and over, had a slow moving story line and was hard to finish. Might be a good time for you to retire Mr. King...
Meer lezen
1.736 mensen vonden dit nuttig
Vertaal recensie in het Nederlands

Miss Barbara
5,0 van 5 sterren A great character study about people who justify their horrible choices
11 september 2019 - Gepubliceerd op Amazon.com
Geverifieerde aankoop
King writes so well about the innocence of kids. He also writes at his best when the subject is pure evil. Slap them together and you have The Institute. The book starts in a simple little town where a cop passing through takes a job as a night knocker. There's a kid, a really smart kid, who's 12 years old and getting ready to attend MIT because he's, you know, special. That's the setting. From there it gets chilling. Even without ghosts, or vampires or outer space boogie men.

The child, Luke, is taken in the middle of the night. His folks are murdered. He wakes up at The Institute in Maine in a room that's just like his - almost. There's other kids there and he gets the skinny from a young girl in the hallway, seemingly smoking a cigarette. She tells him that they "do stuff" to the kids, injections-flickering lights-dunking, but at least they're in the Front Half. You don't want to go to the Back Half. No, that's like the roach motel. Kids go in and don't ever come out.

To say this is a character study of the people throughout history who have told themselves that the horrible, hideous, atrocious things they do are for a "higher good". This book is King at his best. It's tense and I found myself ill at ease throughout the 500 plus pages. But it's good. A good story, good writing, and yeah, sure, it's relevant in the America of today and about our choices.
Meer lezen
670 mensen vonden dit nuttig
Vertaal recensie in het Nederlands

Michael D. Watson
1,0 van 5 sterren Open Mouth, Insert Politics
11 september 2019 - Gepubliceerd op Amazon.com
Geverifieerde aankoop
Preordered this book some months ago, as was always a fan. Then read some recent SK rants made comparing events in this novel to certain views on law enforcement at our borders. Immediately returned the book for refund before reading it. I will not make another SK purchase.
Meer lezen
1.352 mensen vonden dit nuttig
Vertaal recensie in het Nederlands

Lynn S. Bay
1,0 van 5 sterren The master storyteller died...
16 september 2019 - Gepubliceerd op Amazon.com
Let me start with I am one of the first few thousands to read Stephen Kings works. Started with Carrie and book after book since. I still have most in hardback. The first "constant readers" he called us. We applauded as he had his babies, when wife Tabitha began her writing and we hurt when King was injured as a pedestrian. Okay? I know his books.
He rose to a big time author, thanks to his constant readers over the years. We did not begrudge that. He was good. Then since 2016, something changed. He had a platform on any talk show and he let everyone know he hated Trump. Ok, a lot do. But 63 million voted for him and put him in office. But King wants to drill the fact that he hates this President as much as possible. That need is so great, even his FICTIONAL CHARACTERS hate the President. In this book, I encountered the librarian first, slamming people who voted for Trump. I got past that. Ok, we got it, Steve. You don’t like him. Then I get into the last part..it was exciting reading and the institute children are saying their guards with their "zap-sticks" (cattle prods) were like supporters of Trump and were the equivalent of the cattle-prodding little children! Now, these kids are 8-12 years old and thinking this garbage? End of book for me. And all those hardbooks I saved? To the dump. The master storyteller of yesteryear has died to many of those who spent hard earned cash on his early works.
Oh, and be sure and get some folks to write some more 5 star reviews to nullify the one stars so they aren’t too important.
Meer lezen
640 mensen vonden dit nuttig
Vertaal recensie in het Nederlands

C Wm (Andy) Anderson
5,0 van 5 sterren King Brings Us Back to His Roots....
10 september 2019 - Gepubliceerd op Amazon.com
Geverifieerde aankoop
As I sometimes do, I’m going to open myself up to you in a way that may, or may not, resonate. I hope it does, but I know it is probable that detractors will hurl insults my way, as they toss expletives at the master of horror himself. Wish I could state that in so doing I share a common ground with King, but, frankly, I am no more qualified to walk in his shadow as a writer than I am to walk in the shadow of Saint Peter as a Christian.

So, why am I such a fan of Stephen King? I became a fan not due to his fiction. That writing took years of exposure before he won me over. His nonfiction writing, though, went straight to my heart. You see, I am a bit old-fashioned when it comes to fiction and writing. I loved some fiction, such as Old Yeller and Shane, but, my interest always was oriented toward the nonfiction tales by the likes of John Goddard (Go North, Young Man), Eric Collier (Three Against the Wilderness) and Bradford Angier (several books on living off the land).

Then, one day, I read “The Stand.” That book was the culmination of everything I felt a novel should be, written in exactly the right language and flow.

In recent years, King has penned a vast number of tales that tickled that nerve hidden deep inside me. While I enjoyed most all of them, not one of them satisfied that itch deep inside. Until, perhaps, “The Institute.

Once again, King is not the ‘artist’ on par with James Michener or John Steinbeck or F. Scott Fitzgerald. When it comes to plain English writing, especially the sort where the writer stays outside the story and lets his characters get through to us so we can see the world through their eyes, though, no master storyteller comes close to Stephen King, in my humble opinion. So, as you peruse the review below, know that I am prejudiced in favor of Stephen King.

In “The Institute,” we begin our journey in a small village of South Carolina. The opening is a masterful way to tug us along as we get to know a key figure and setting. Later, we meet our protagonist in Minneapolis and still later we get to know him (Luke) in Maine. To expound further would lead to spoilers, which I refuse to do…

BLUSH FACTOR: If you’ve never read a Stephen king book, it might surprise you to learn the master of horror does not write for children or for people whose ears are sensitive to foul language. Yet, I found myself enthralled by yet another novel by one of my favorite authors.

WRITING & EDITING: In my opinion, no writer alive today gets into the heads of his subjects and tells their story to us better than does Stephen King. I marvel in considering how perfectly he presents these kids in their own words. I mean, King is in his seventies, how in the world can he so perfectly sound as though he is one of those kids?