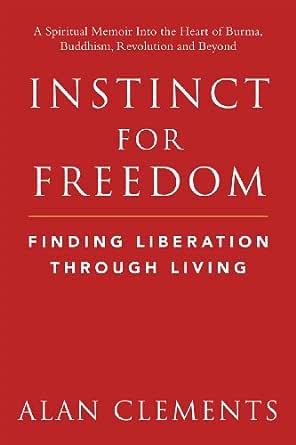 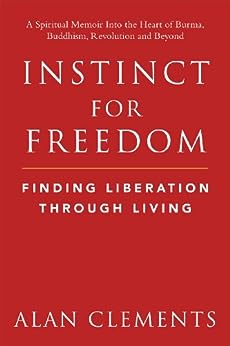 "During an era when a spate of shallow, narcissistic fiction has found a niche as 'sacred literature' Alan's work is a wonderful relief and reminder that the heart of spirituality still is, and will always be, compassion. I am thrilled to see his rich and productive search being shared with wider and wider audiences."
Bo Lozoff, author of We're All Doing Time & It's a Meaningful Life

"Alan's profound and moving work addresses head-on the central question of our time - how to put meditation into action and so transform the real conditions of the real world. His honesty and passion are liberating, and his message both timeless and acutely timely."
Andrew Harvey, author of The Direct Path and Sacred Activism

"Rarely has a book touched me as deeply and personally as Instinct for Freedom. This profound work is a call to action, a spiritual force for change."Cheryl Richardson, author ``Stand Up For Your Life``

In 2002 Alan wrote Instinct for Freedom--Finding Liberation Through Living (World Dharma Publications), a spiritual memoir about his life in Burma and chronicles his pursuit of truth and freedom while illuminating the underlying framework of World Dharma. Instinct for Freedom was nominated for the best spiritual teaching/ memoir by the National Spiritual Booksellers Association in 2003 and has been translated into a numerous languages.

His most recent book, A Future to Believe In--108 Reflections on the Art and Activism of Freedom (World Dharma Publications, 2011) has received distinguished praise from numerous leaders, visionaries and activists, including Dr. Helen Caldicott, Joanna Macy, Dr. Vandana Shiva, Bill McKibben, Paul Hawkin and Derrick Jensen (the renowned environmental poet laureate), who wrote: "This culture is killing the planet. If we are to have any future at all, we must unlearn everything the culture has taught us and begin to listen to the planet, to listen to life -- the core intelligence of nature and the human heart. This book not only helps us with the unlearning process -- the greatest challenge humankind has ever faced -- it provides the essential wisdom, the spiritual intelligence, to open ourselves to finally start to hear."

In his work as a spiritual activist, journalist and teacher, Alan has presented to such prestigious organizations as Mikhail Gorbachev's State of the World Forum, the Soros Foundation, the United Nations Association of San Francisco, and the universities of Harvard, California, Toronto, Sydney, and many others; and in 1991 he gave the keynote address at the John Ford Theater for Amnesty International's 30th anniversary.

"Alan's life is material for a legend. An intellectual artist, freedom fighter, former Buddhist monk, he shares his insights and experience with a passion rarely seen and even more rarely lived. He'll make you think and feel in ways that challenge your entire way of being."
-- Catherine Ingram, In the Footsteps of Gandhi and Passionate Presence

"One of the most important and compelling voices of our times . . . Alan Clements is a riveting communicator -- challenging and inspiring. He articulates the essentials of courage and leadership in a way that can stir people from all sectors of society into action; his voice is not
only a great contribution during these changeful times, it is a needed one."
-- Jack Healy, former director of Amnesty International, founder of the Human Rights Action Center.

Alan Clements was the first American to become a Buddhist monk in the country of Burma, where he lived for the good part of a decade. Since leaving the monastery, he has become a spiritual maverick, working for global human rights and teaching his contemporary understanding of liberation to audiences around the world.

After twenty years of leading retreats, Instinct for Freedom is Clements's first book of spiritual exploration, a visionary blend of adventurous autobiography and radical inquiry. Here he presents what he calls World Dharma, an approach to spiritual development that mirrors the narrative of Clements's visionary life. He gives voice to an essential spirituality that can be common to all people — a world dharma based in one precious human value: freedom, the liberation from fear, ignorance and dogma, and the elevation of dignity, conscience, and beauty.

For Clements, freedom is rooted in real life experience, in holding life's complexities in balance with its wondrous gifts, and in the transformational power of relationships with other people and with the world. Exploring the nature of consciousness and our place in the mysterious cosmos may be the key to our freedom, he says. In detailing the early years of his Dharma life living in silence in a Burmese monastery, Clements presents a rare, beautiful, and nuanced account of the actual experience of intensive meditation and what it can offer.

Yet Clements's approach is not a doctrine. It is an intuitive process realized through deep inner trust, gentle self-inquiry and naturalness of spirit and expresses itself in daily acts of courage and love. No amount of spiritual practice or meditative training can adequately prepare us for life, he says. We must find our liberation through living, in this very moment, now, in whatever circumstances we face.

Clements has been interviewed on ABC National, Talk to America, CBC, VOA, BBC, the New York Times, Time and Newsweek magazines, the Sydney Morning Herald, Utne Reader, Yoga Journal, and scores of other media worldwide. He also delivered a keynote at Amnesty International's 30th Year Anniversary at the John Ford Theater in LA. You can learn more about Alan's work on his website: www.AlanClements.com.
Alle bekijken
click to open popover

K. K.
5,0 van 5 sterren Must Read!
19 maart 2010 - Gepubliceerd op Amazon.com
Geverifieerde aankoop
This book is an amazing well written and interesting journey of the authors soul. He challenges the reader to look inside themselves and make a change in the world through developing a more conscious mind and forgiving heart. It is truly inspirational!
Meer lezen
Een iemand vond dit nuttig
Vertaal recensie in het Nederlands

Conrad
5,0 van 5 sterren Life is Clement's greatest teacher. He is also a great student...
19 februari 2012 - Gepubliceerd op Amazon.com
This book struck me as one of the most authentic books I have read about anyone's spiritual journey. It is written by someone who has really invested his life energy being able to see the world, and his place in it, as it really is. This may seem like an impossible task, but I have to give credit to Clements for going much further along this path than just about anyone.

The book has a somewhat unusual order to it - it is not purely chronological, but, like a movie with frequent flashbacks, it documents his journey before and after his time as a monk in Burma, including earlier life events that led to his dissatisfaction and disillusionment that propelled him into this deeper search for the truth. Much of the middle section is devoted to describing his monastic experience in more detail, while the end is more of a philosophical overview, drawing on all of experiences to define his current worldview.

Even though Clements placed tremendous value on the teaching he received from his masters in Burma, he realizes that to remain in that place would ultimately be narcissistic - he then finds (although not entirely by choice) he becomes a student of life itself through a number of unforeseen circumstances. Ultimately, though the book offers a primarily Buddhist perspective, it challenges everyone (including Buddhists) to transcend the safety and comfort of their own religious practices. For this reason it is likely to have appeal to authentic practitioners of any spiritual tradition.

Alison www.health-journalist.com
5,0 van 5 sterren The ring of truth (live)
25 juni 2003 - Gepubliceerd op Amazon.com
In reading most spiritual books, I've noticed that there's a subtle gap between the well-meaning view portrayed, and what I actually feel and experience in reading. You know when you get a used book, and the prior reader has underlined and written, "How true!" Well, it's like other spiritual books have an undertone of "I wish it were true."
In contrast, Clements' words are alive with authentic conviction, and the unmistakeable clarion ring of truth. There's not a trace of pontification. This man has lived an incredible life. He's able to capture the essence of real spirituality and deliver it live and wriggling to the reader. I don't know how he does it. But, as a writer myself, I know that there's only one way he could do it. By really living it. And clearly he does.
He came back down from the mountaintop, so listen up, folks, cause he's really got something worth hearing.

Rachel Landrecht
5,0 van 5 sterren An Instinct for Freedom
8 november 2002 - Gepubliceerd op Amazon.com
"An Instinct for Freedom" is an eloquently expressed and masterfully woven account of one man's personal and spiritual journey, that travels directly through the heart of humanity. While navigating this tender landscape, Alan Clements leads us on an exploration of the essence of consciousness, the surrender of trust, the truth of our fragility, the horror of our darkness, the intimacy of compassion, the power of our choices, and ultimately, the paradigm of grace that shifts when we make the leap from seeing ourselves as separate to honoring our shared humanity. By simply witnessing ourselves in each other, we come to understand what Clements calls "the inseparability of liberation."
Often summarizing in a few short sentences what takes other authors seemingly entire books to express, Mr. Clements encourages the reader to "examine the role of perception as the architect of reality." Lead by his example of courage, ruthless self-inquiry, and unabashed candor, we are left with no other meaningful choice but to do so.
I was so deeply challenged and inspired by this book that any words of praise I seek to offer feel almost trite and wanting. Within its pages there contains every element that one would hope for in a great work of fiction. But fiction this is not. This is the recounting of an extraordinary life. Forged with insight, Clements challenges our invested beliefs, shatters the lies that cage our freedom, and then loving reconstructs the truth of our sameness within a unified heart. This heart, pieced back together in seemingly perfect union, may continue to beat as it once did, but will never again be the same.