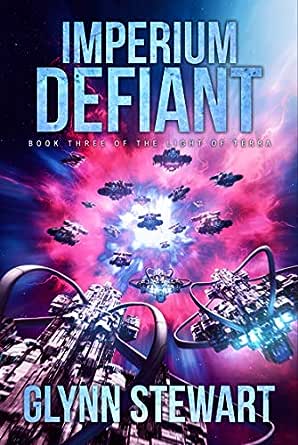 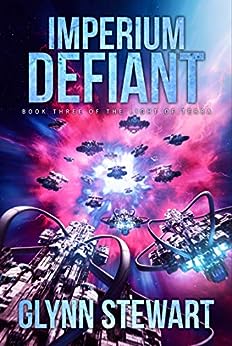 The enemy promises conflict and annihilation
Their allies threaten betrayal and devastation
A daughter of Earth raises the call of defiance
And the Imperium has never knelt!

When the Taljzi’s genocidal invasion brought promises of aid from the oldest and greatest of the Core Powers, humanity and the Imperium looked to the Mesharom for salvation. But that salvation turns to ash as the Mesharom demand the surrender of the very weapons that saved the Imperium.

Defiance leaves the Imperium facing the Taljzi without the aide of the galaxy’s wisest race, but with their old enemies the Kanzi at their side, they have no choice but to end this war at any cost.

But Mesharom and Taljzi alike have scattered fire and death across the stars. The Imperial forces under Fleet Lord Harriet Tanaka will need every scrap of firepower and cleverness not only to defeat their enemies…but to find them in the first place.

Jonathan A.
5,0 van 5 sterren Well, now I want the next book in this great series!
19 september 2019 - Gepubliceerd op Amazon.com
Geverifieerde aankoop
Look, I don't know what to tell you. I know the series is supposed to be over but I think the story could just be begining. I'm wishing for another book picking up right at the end of this one.
Certainly get this book and enjoy it. It might even make you a more interesting person.

I received a free electronic review copy of this book in exchange for my honest review. I also pre-ordered this book as soon as I could because I value these stories both for the joy I have reading them and how I think they make me a better more interesting person in the future. I have learned that I will typically forgoe several hundred dollars in lost earnings to read Glynn Stewart's books as soon as I reasonably can.

The Vorlon
5,0 van 5 sterren An excellent rolicking good story!
17 september 2019 - Gepubliceerd op Amazon.com
Geverifieerde aankoop
Disclosure – I received an advance copy of this book from the author specifically for review.

Imperium Defiant is the third and final book in the Light of Terra trilogy. In in Mr. Stewart’s Duchess of Terra universe, Earth is a part of a multi-species empire. While not by any means the most preeminent species, over the course of the series, Terra (as Earth is referred to in the series) has become an increasingly important part of the Imperium.

I will admit that I was initially skeptical of the books, as they are definitely not ‘hard science fiction’ and more akin to ‘space opera’ – but a rollicking good space opera indeed. Mr. Stewart appears to have the knack of developing good stories, with lively characters that a reader can become involved in. Setting aside the ‘it just works’ elements around the FTL drive and weapons, it easy to come engaged in the world the author creates – and he does build a world, that while relying in part, on ‘handwavium’ and ‘unobtanium’ – it is a world that is consistent and follows a set of rules. Which, by the way, is a refreshing change from some of the illogical dreck foisted upon readers by other authors (who shall remain nameless).

Imperium Defiant neatly wraps up the story started in the book “Darkness Beyond”, the first book of the trilogy. The Imperium, along with one-time enemies now tentative allies, and the mysterious and powerful ‘elder race the Mesharom face down the genocidal race called the “Taljzi’, who’s religious beliefs compel them to kill all other bipedal races.
While neatly wrapping up the storyline, there are surprises that await the reader, as consequences from deeds and events from history explained in prior books now come home to roost. Questions of courage, morality and responsibility have to be faced and answered by the characters. The author invokes the ambiguity of war and its aftermath quite well, leaving the characters with no easy answers and a future that poses many challenges. There are no easy answers or neat solutions, which is an excellent open end that promises future books in the series.

A couple of minor quibbles – 1. The author sometimes is over the top with LGBT relationships. There is absolutely nothing wrong with invoking a future that is much more tolerant and open, however the author seems to try to hard to make it obvious – sometimes the relationships seem bit ‘forced’ to the forefront. It's understandable what the author is trying to do by portraying a more inclusive society, one that meshes well with other species, but it's a minor distraction to have it appear 'forced' at times. It wouldn't be so obvious if other species had similar relationships, but ONLY humans in the story seem to have LGBT relationships, it jumps out. 2. There are some minor, very minor plot points that seem to be at odds with previous statements by characters, or how some events described in the universe’s ‘history’. These might be intentional misdirection by the author, relying on character interpretation or viewpoint but they did cause this reader to go back to previous books because of a ‘wait a minute’ moment.

Overall, this book, as part of a trilogy is strongly recommended. Suspend belief a bit regarding the ‘science’ and immerse yourself in the detailed and interesting world the author has created. I would recommend starting with the first trilogy “Duchy of Terra” (Terran Privateer, Duchess of Terra and Terra and Imperium) as they lay out the background needed to understand the events in the second trilogy.

The books are a relatively easy read and you should be able to finish the entire trilogy in oh, say, less than a half of a long cycle.

E. Nolan
4,0 van 5 sterren Resolutions & Questions
27 december 2019 - Gepubliceerd op Amazon.com
Geverifieerde aankoop
This would appear to be the climax of Stewart's second "Duchy of
Terra" series, pitting the A'Tol Empire (which includes said Duchy
and its associated humans) and their hated, slaver, neighbors the Kanzi
against the even more hated and casually genocidal Talzi. In this
book, the Imperium officially levels-up, fighting side by side with
one core power, and pulling the bacon of another core power from
the frying pan. While not without troubling political developments,
the key aim of the war appears to be accomplished at the end of the
book (not a spoiler: This was never "and then all the good guys
died" series), making me wonder where we go from here.

As usual, Stewart is a bit comically woke, but continues to write
good space battles and an engaging story-line. My guess is that
we'll have another jump forward in time before the next book as we
did after the initial sequence, but we'll see. There were certainly
some intriguing questions raised about the galaxy's first space travellers.
Meer lezen
Vertaal recensie in het Nederlands

Grey Dragon
5,0 van 5 sterren Nice continuation
22 september 2019 - Gepubliceerd op Amazon.com
Geverifieerde aankoop
Following the continuing adventures of a sizable number of characters is never easy, but Mr. Stewart does it well. The way the Mesharoom were handled was odd to me given prior portrayals but made sense in the larger context of the rate. By this point hopefully it is not a spoiler that they seem themselves as the only line of defense in preventing someone from performing certain experiments and breaking the universe . . . AGAIN, like the race known as the precursors did and wiped out multiple species including their own in the process. Otherwise almost everything was well plotted and made sense in the overall theme of the story being told.
Meer lezen
Een iemand vond dit nuttig
Vertaal recensie in het Nederlands

Wildwily
4,0 van 5 sterren “We shall fight in the shade.”
19 september 2019 - Gepubliceerd op Amazon.com
Geverifieerde aankoop
The battle sequences and technological stuff was well written. The various political subplots and tensions were interesting and complex.

The personal part - especially the romance part - was awkward. It felt more like a Point was being made than a story was being told.

I like this universe. It looks to become more interesting due to developments in the novel. I would notionally be open to a follow on series.
Meer lezen
Vertaal recensie in het Nederlands
Ga naar Amazon.com om alle 81 recensies te bekijken 4,5 van 5 sterren
Terug naar boven
Over ons
Verkoop bij ons
We helpen je graag
© 1996-2020, Amazon.com, Inc. en dochterondernemingen