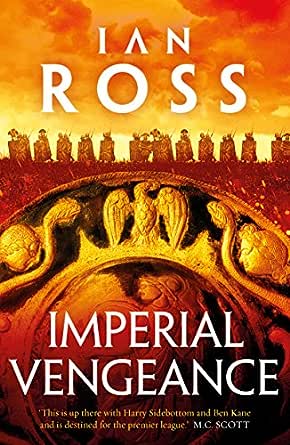 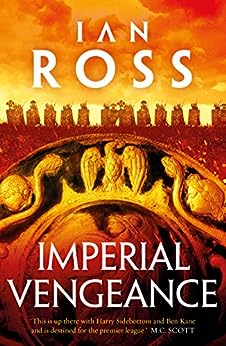 THE ROMAN EMPIRE HAS NO MERCY IN ITS QUEST FOR POWER.

Aurelius Castus is one of the leading military commanders of an empire riven by civil war. As the Emperor Constantine grows ever more ruthless in his pursuit of power, Castus fears that the world he knows is slipping away.

On the eve of the war's final campaign, Castus discovers that the emperor's son Crispus aims to depose his father and restore the old ways of Rome.

Castus must choose between honour and survival, and face a final confrontation with the most powerful man in the Roman world, the ruler he has sworn loyally to serve: the Emperor Constantine himself.

Philip J.
5,0 van 5 sterren Historical fiction
9 oktober 2019 - Gepubliceerd op Amazon.com
Geverifieerde aankoop
I suggest that you read the series in order. This and the other books in the series are very good.
Meer lezen
Vertaal recensie in het Nederlands

JPS
5,0 van 5 sterren Constantine the murderer
31 januari 2018 - Gepubliceerd op Amazon.com
This is book five of Ian Ross’ Twilight of Empire series, with this volume focused on Emperor’s Constantine last civil war against Emperor Licinius in his hungry quest for sole and absolute power. Also included are the few years that followed and which saw some of the most (and deliberately) poorly recorded events of his reign: the execution of his young and promising son from a first union, the Caesar Crispus and the demise, equally through violent death, of Constantine’s wife – The Empress Fausta, daughter and sister of former Emperors that Constantine had overcome. He was also responsible for their deaths, not to mention the murders of Licinius and his son (respectively his brother in law and his nephew). The point here is that Constantine, whom the early Christian made into its “shinning hero” and a paragon of all virtues eliminated all potential competition in ways that were similar to those used by some of his most ruthless (non-Christian) predecessors. In other words, the paranoia, power hunger and ruthlessness that went with being and surviving as Emperor hardly changed, even if the Emperor’s religion did, and this is a very well made point throughout the book.

The circumstances surrounding the deaths of Crispus and Fausta are a bit mysterious, especially the link between the two of them because their demises were related. It is the reasons for their demise which remain to this day somewhat unclear, largely because they both suffered from “damnatio memoriae”, with all mention of their names on statues, monuments and public records being suppressed according to Roman tradition. The mystery, and the propaganda and spin surrounding their demise is also intriguing because we now of more than one version of it written and rewritten by mostly Christian (and a few non-Christian) historical sources.

While the author’s version and explanation of what happened does have elements of fiction, if only because of the prominent role played by Aurelius Castus (the hero) in it, it does have the advantage of being historically plausible. An additional element of plausibility is that Constantine’s behaviour towards his militarily successful son and his fear that such successes might give the young man ideas about an accelerated succession happen the mirror similar feelings and attempts to control the potential challenger that Julian would become for Constantin’s son and successor Constantius II during the next generation. In the case of Constantius II’ fears regarding Julian at least, the concerns turned out to be partly justified and perhaps also in part the result of the Emperor’s paranoia and jealousy. It is very possible that his father Constantine developed overtime similar ambivalent feelings towards Crispus, his eldest son.

Another interesting historical interpretation made by the author is the huge role played by Helen, Constantine’s mother, in these events and more generally the significant (although not absolute) influence she had on him. Her exact role in the deaths of her grandson and of her daughter in law is unknown, although her hostility with regards to Fausta is easy to believe as is her almost fanatical support to the Christian faith. A related and excellent feature is the author’s descriptions of the changing atmosphere at the imperial court overtime, as Constantine does seem to have become increasingly autocratic. One nice touch here is to have this atmosphere reflected through the obsequious behaviours and fears of his higher ranking officials and officers, ready to accept and promote whatever became the official version of events.

Finally, and in addition to an exciting plot and a very plausible reconstruction of historical events, there is some excellent characterisation, including for the fictional characters. Aurelius Castus is his usual sympathetic, competent, bullish and loyal self although he is ageing, is sick of war and death wishes to retire and his loyalties become strained by the tensions between father and son and by the need to protect and ensure the survival of his family (and, although to a lesser degree perhaps, his own). Loyalty is also the paramount feature of Aurelius’ closest companions, his faithful bodyguard the Sarmatian warrior and expert archer, but also his no less faithful friends and survivors from his time in the legion in Britain, in particular the former thug and assassin Felix and the former Greek teacher Diogenes.

An excellent, exciting and “un-put-down-able” read easily worth five stars, with my only regret being that this book may be the last one of the Series (although I very much hope not!).

Clemens A. Schoonderwoert
5,0 van 5 sterren A Magnificent Imperial Act Of Vengeance!
2 februari 2018 - Gepubliceerd op Amazon.com
This very entertaining book is the 5th volume of the fabulous "'Twilight of the Empire" series by the author Ian Ross.
The historical details concerning this story are splendidly researched and explained, from what is known or suggested by historians, within the author's note at the end of the book.
At the beginning of the book you'll find a wonderful drawn-map of the Central Provinces of the Roman Empire AD 323-326, and a text from Emperor Constantine by Codex Theodosianus.
Story-telling is once again of a top-notch quality, because the author lets his tale flow with wonderful interaction between all the characters, and in doing so all the characters, whether they are real or fictional, come vividly to life within this tremendous Roman tale to grip the reader from start to finish.
The story sets off in the year AD 323 and will end in the year AD 326, with Emperor Constantine in power over Rome and the Western Provinces and still in mortal conflict with Emperor Licinius who holds Thrace, the East and Egypt, while this same Emperor Constantine is looking for a way to accomplish sole total control of the whole Roman Empire.
Other obstacles for Emperor Constantine will become his son Crispus Caesar, who's very popular in the Provinces, and Constantine's wife the Empress Fausta, and not to forget Constantine's manipulative mother Helena, for they will also play a major part in this book of power, ruthlessness, betrayal, loyalty and control of the whole Roman Empire, and it is in this background situation where our main leading fictional character Aurelius Castus, who has sworn loyalty to Emperor Constantine but who's from the old ways himself, just like Crispus Caesar, has to find a way to choose between honour or survival in the final deadly confrontation that is to come in the end.
Highly recommended, for this is another superb Roman story come alive and one that is for me: "A Magnificent Imperial Act Of Vengeance"!
Meer lezen
Een iemand vond dit nuttig
Vertaal recensie in het Nederlands