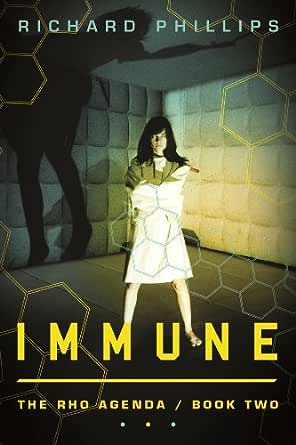 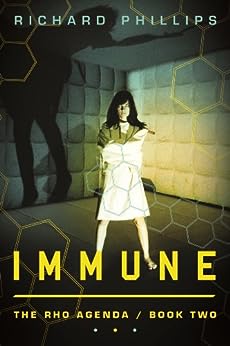 In the final pages of the spellbinding novel The Second Ship, NSA director Jonathan Riles failed to halt the Rho Project’s infiltration of the US government. Now the Project’s alien nano-serum is loosed upon the world, disguised as a miracle cure and leaving too many people—good people—dead. And anyone still alive to challenge the Project won’t be for long: an assassin known only as El Chupacabra is systematically eliminating any and all opposition.

At the top of the hit list is NSA fixer Jack Gregory, along with Heather McFarland and Mark and Jennifer Smythe, the three teenagers who first exposed the Rho Project’s evil agenda. In just a few short months, the trio has seen life as they know it stripped away, trapping them in a confusing new reality where human DNA is modified at an alarming rate. Struggling to understand what they are becoming and on the run for their lives, the teens and their remaining allies must stop the Rho Project before it alters the very fabric of humanity.

NightRain
5,0 van 5 sterren Very good action and suspense
5 maart 2018 - Gepubliceerd op Amazon.com
Geverifieerde aankoop
Very good action and suspense! The characters were well developed and as you start getting in their skin, you'll get anxious as the story develops. I have just finished this series and just started the Inception one, which means that I really liked it, and I can't wait to see some more adventures of the mysterious Jack, and find the full story about his mysterious abilities.

The books don't let you hanging in mid air at the and of a volume, as the author wraps it quite nicely - but I can't see how you can just stop from digesting it. I have listened to the audio-book, and the narrator is very good, and knows how to capture the audience. I intend to fully explore the other 2 Rho series and even more from this author...well, as long as they have an audio version.

Alan Mills
4,0 van 5 sterren Volume two....better than the first
2 november 2016 - Gepubliceerd op Amazon.com
Geverifieerde aankoop
This is the second entry in this series (Second Ship). It can theoretically be read on its own...but don't. The basic story is simple: two alien space ships crashed to earth. The US military found one, but had zero luck figuring out anything about it, until it decided to share its secrets with Dr. Stephenson. The second ship remained hidden, and was finally found by three high school students. As they interact with the ships, everyone is changed...for good or bad is one of the uncertainties driving the plot.

In this second volume, the students develop technology based on their discoveries (and changes) from the second ship. Dr. Stephenson begins exploiting some of the hidden secrets from the first ship. Both groups have powerful friends and enemies....whose clashes are the main driver of the narrative.

Drug cartels, super-assassins, and financial manipulations all play a role. In the end, what we have is a good thriller, with a tad of sci-fi thrown in.
Meer lezen
Een iemand vond dit nuttig
Vertaal recensie in het Nederlands

Ann in NC
5,0 van 5 sterren enjoyed this series
21 augustus 2017 - Gepubliceerd op Amazon.com
Geverifieerde aankoop
I purchased all eight of the books that were already released and pre-ordered the last book on August 2nd. I finished all nine books on August 17th. That is just a little under two days per book. Back in the days before cable tv or the internet, it was not unusual for me to read a book in a day or two. It is very unusual now since I have so much else going on. Add to that the fact that time itself is speeding up with where Gaia is headed.

I am sad to see them end. I wish for movies of them but I think they would have to be animated since real actors would probably age out of their role, there is just so much to cover.

I highly recommend all of them. I read them in date order since at the time of purchase, I did not know the author recommended chronological order. Still very enjoyable.
Meer lezen
Vertaal recensie in het Nederlands

Debra Miller
5,0 van 5 sterren Great sequel, better than the original... for adults
9 november 2012 - Gepubliceerd op Amazon.com
Geverifieerde aankoop
While I agree with previous reviewers that this book may not be suitable for younger readers, I found it a better book for adults. The action and plot are on par with adult spy thrillers, and create a riveting novel. I have pre-ordered the 3rd book, Wormhole, and am looking forward to what Richard Phillips does to continue this story.
The first book in the series set the stage and did indeed read more like a young adult book. Building on this, the 2nd novel ties several characters together and adds more villains to keep the reader on the edge of their seat. I bought the 2nd book because I enjoyed the first one, but this far exceeded my expectations.
Meer lezen
16 mensen vonden dit nuttig
Vertaal recensie in het Nederlands

Koren55
5,0 van 5 sterren Continues the Story from Second Ship
18 juli 2016 - Gepubliceerd op Amazon.com
Geverifieerde aankoop
Another excellent adventure in the Rho Agenda series. This book is a direct sequel to the first book in the trilogy, Second Ship. It continues the story of two alien spacecraft that were found after having crashed to Earth. One by the Government, and one by three high school students. It involves a giant conspiracy, killer assassins, and NSA Black Operatives. Two other main characters are Jack Gregory, also known as the Ripper, and his beautiful, and deadly partner Janet Price. These two characters appear in this author's prequel trilogy as the main characters.

If you've read the first book, you have to read this to find out what happens to our heroes. Both books are full of adventure and exciting moments; a real "tour de force". If you like Science Fiction Adventure thrillers, these books are for you. And though they have high school characters, they're meant for that age and above.