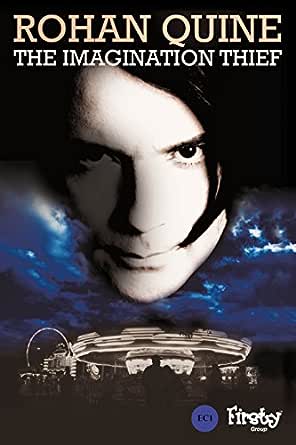 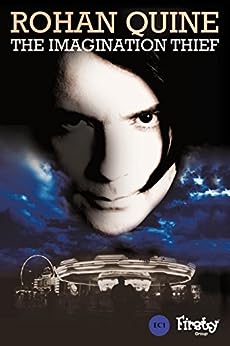 The Imagination Thief by Rohan Quine is about a web of secrets, triggered by the stealing and copying of people’s imaginations and memories. It’s about the magic that can be conjured up by images of people, in imagination or on film; the split between beauty and happiness in the world; and the allure of various kinds of power. It celebrates some of the most extreme possibilities of human imagination, personality and language, exploring the darkest and brightest flavours of beauty living in our minds.

Alone in his skyscraper office one night, Jaymi undergoes a transformation that will change his life: he acquires the power to see into others’ minds, and then to control and project their thoughts.

Realising the potential of this gift, he hypnotises a media mogul into agreeing to broadcast an electrifying extravaganza of sound and vision emanating from Jaymi, the like of which has never been witnessed before, that will captivate millions. However, one of the mogul’s underlings has more subversive plans for milking Jaymi’s talent, involving the theft of others’ imaginations and intimate memories for commercial gain.

The broadcasting of his visions plunges Jaymi and his best friend Alaia on a journey into the underbelly of Asbury Park – a seaside town once full of life but now half-forgotten. The town’s entire oceanfront is now almost a ghost town: ruled by gangsters and drug dealers, headed by Lucan, it is populated by lost souls and the beautiful who have fallen on hard times. Blackmailed into thieving the most private and primal memories and experiences from these people’s imaginations, Jaymi discovers a web of secrets and provocations simmering beneath the surface of the town, about to explode.

When a waxwork of Lucan’s decapitated head is anonymously planted in his own bar, fear bubbles up, as everyone becomes a suspect in this unforgivable challenge to Lucan’s dominance. Then when another provocative waxwork appears – a naked full-body modelling of Lucan’s beautiful but tortured lover, Angel – Jaymi knows he must use his own gift to discover the perpetrator before Lucan does.

Delving into and celebrating the most beautiful and extreme possibilities of human imagination, personality and love, The Imagination Thief is literary fiction, with a touch of magical realism and a dusting of horror. It explores the universal human predicaments of power, beauty, happiness, hopelessness, good and evil.

What we thought:
Another difficult to classify book, but that’s precisely why it works so well. Part literary fiction, part fantasy, it is a surreal experience which makes the most of its equally offbeat location. With a cast of unforgettable characters and a central premise both intriguing and epic, this is what indie fiction does so very well – breaks boundaries and takes risks. In this case, it pays off.

From something as mundane as a drink from vending-machine, Jaymi unlocks an extraordinary ability: he can mine human imaginations. He wants to use this for the general good, enabling people to unlock and enjoy that inner universe. He has a plan. With his knowledge of the business and the unearthly vocal talents of his friend Alaia, he plans a broadcast like no other.

In Asbury Park, New Jersey, an abandoned holiday resort, preparations for the strangest and biggest show on earth continue. They encounter an eclectic bunch of characters; lovers, enemies, slaves and masters, all of whom provide Jaymi with a wealth of material. But information is power, and more than one person wants access.

The swooping eloquence of this book had me hypnotised. Quine leaps into pools of imagery, delighting in what words can do. The fact that the reader is lured into joining this kaleidoscopic, elemental ballet marks this out as something fresh and unusual. In addition to the language, two other elements make their mark. The seaside ghost town with echoes of the past and the absorbing, varied and rich cast of characters.
It’s a story you’ll find hard to leave.

You’ll enjoy this if you liked: Naked Lunch, by William Burroughs, How To Be Both, by Ali Smith, Tainted Love, by Stewart Home

Avoid if you dislike: surreal tangents, a blend of fantasy and reality, the unconventional

The contrasting settings of busy, businesslike Manhattan and the ghost town of a nearby decaying seaside resort are only the backdrop to huge flights of fancy into the minds of the characters, explored by the newly psychic hero Jaymi. As he delves into their memories, sights and sounds from all over the world - real and imagined - spill forth, from war-torn Vietnam to idyllic classical gardens, beneath the oceans and into outer space. All of these experiences are described with a larger-than-life intensity that put me strangely in mind of Coleridge's Kublai Khan - and occasionally its drug-induced origins too!

It's not an easy or comfortable read, particularly when closely examining mental and physical cruelty and violence between some of the characters. I read with a constant sense of foreboding. However even the most shocking passages are underpinned by the compassion, pity and tenderness of the narrator for all but the most brutal characters. There's also some very welcome, very British understated humour to offset some of the horror. The brevity of the "mini-chapters" was well-judged - I felt I needed to come up for air after some of the short episodes, and to assimilate the latest action before moving on.

The immediacy of the story is more keenly felt because it is written in the present tense - always more demanding on the reader, I find, and even more so in this case because although most is in the first person, there are also many second-person narratives, where Jaymi is reading the minds of other characters and addressing them: "You move closer..." That the author is able to keep the reader not only engaged but tantalised by this difficult mode of storytelling indicates the power of his prose.

Though it's very much a modern book, with the constraints of modern life as one of its themes, there are touches of the classic about it too, reminding this reader of Johnson's Rasselas (at risk of sounding pretentious and also doubting my own memory, as it's about 30 years since I read that book!) Jaymi is really in many ways an innocent abroad, though he thinks he is so knowing. He may be able to read people's minds in details, but some of the simplest conclusions pass him by.

As I turned the pages, I found myself puzzling how on earth this intense tale would end. Without spoiling the plot, I can say I found the conclusion surprising, redemptive and satisfying.

My Kindle wasn't able to cope with the audio and video files, and the prose was compelling enough to make me want to skip those and get on with the story, but it was an interesting idea to include them - more evidence of the author's prodigious creativity. So, here we have not so much an imagination thief, but, to the reader, an imagination expander. Great stuff - thank you, Rohan Quine.
Meer lezen
Vertaal recensie in het Nederlands
Ga naar Amazon.com om alle 2 recensies te bekijken 5,0 van 5 sterren
Terug naar boven
Over ons
Verkoop bij ons
We helpen je graag
© 1996-2020, Amazon.com, Inc. en dochterondernemingen