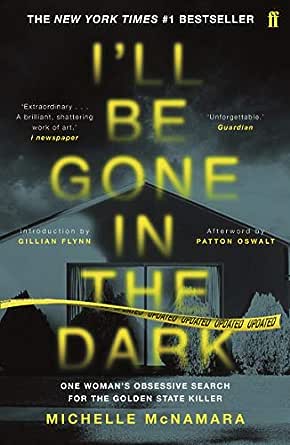 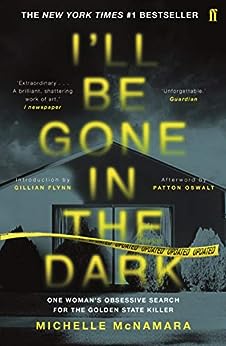 I'll Be Gone in the Dark (English Edition) Kindle-editie

"A singular, fascinating read. It's lifelike in its incompletion... a posthumous treasure that feels thrillingly alive. A-"--Entertainment Weekly

"Both a vivid and meticulous investigation of a twisted predator who terrorized quiet, upper middle-class communities in California for nearly a decade, and a wrenching personal account from a writer who became consumed by her subject."--New York Times

"Narrative true crime journalism at its very finest, a complex, multilayered, chilling portrait of a faceless monster, and a remarkable tribute to the woman who, up until her last day, believed she would one day have him in her crosshairs."--Village Voice

"That the book feels triumphant even after tragedy upon tragedy is a testament to McNamara's skill as a reporter."--Esquire, "The 25 Best True Crime Books Every Person Should Read"

"Any true crime project is basically a reckoning with death, but in this case, it's a reckoning that is no longer theoretical. McNamara is gone. And what's especially sad about her absence is just how good she was."--The Portland Mercury

"The work has many notable qualities -- in particular, a penetrating and elegiac voice."--Seattle Times

SHORTLISTED FOR THE GORDON BURN PRIZE 2018

A masterful true crime account of the Golden State Killer - the elusive serial rapist turned murderer who terrorised California for over a decade - from Michelle McNamara, the gifted journalist who died tragically while investigating the case.

'You'll be silent forever, and I'll be gone in the dark.'

For more than ten years, a mysterious and violent predator committed fifty sexual assaults in Northern California before moving south, where he perpetrated ten sadistic murders. Then he disappeared, eluding capture by multiple police forces and some of the best detectives in the area.

Three decades later, Michelle McNamara, a true crime journalist who created the popular website TrueCrimeDiary.com, was determined to find the violent psychopath she called the Golden State Killer. Michelle pored over police reports, interviewed victims, and embedded herself in the online communities that were as obsessed with the case as she was.

I'll Be Gone in the Dark - the masterpiece McNamara was writing at the time of her sudden death - offers an atmospheric snapshot of a moment in American history and a chilling account of a criminal mastermind and the wreckage he left behind. It is also a portrait of a woman's obsession and her unflagging pursuit of the truth. Framed by an introduction by Gillian Flynn and an afterword by her husband, Patton Oswalt, the book was completed by Michelle's lead researcher and a close colleague. Utterly original and compelling, it is destined to become a true crime classic - and may at last unmask the Golden State Killer.

carilynp
5,0 van 5 sterren THE truest of true crime
3 maart 2018 - Gepubliceerd op Amazon.com
Geverifieerde aankoop
Author Gillian Flynn, of GONE GIRL fame, wrote an introduction to Michelle McNamara’s true crime book I’LL BE GONE IN THE DARK: ONE WOMAN’S OBSESSIVE SEARCH FOR THE GOLDEN STATE KILLER, which was published posthumously, in which she states about the author: “I love reading true crime, but I’ve always been aware of the fact that, as a reader, I am actively choosing to be a consumer of someone else’s tragedy so like any responsible consumer, I try to be careful in the choices I make. I read only the best; writers who are dogged, insightful, and humane.” This pretty much sums up why I read and how I select the books that I do about the deep, dark, and twisted behind-the-scenes grit of true crime. My interest is in the writing itself and the research that the writer has put into the book to examine the backstory of a criminal mind. In this case, McNamara did not live to complete her nearly finished story about the Golden State Killer who spread fear and unthinkable crimes up and down the state of California, but her researchers and husband Patton Oswalt put her decade of work together into an astonishing book, an in-depth look at a most horrific series of events.

The subject is a serial rapist and murderer, who committed crimes from the 1970s through 1980s. Police and FBI agents tracked the case from city to city and once DNA testing came to be, it was confirmed that the crimes were in fact all committed by one person, however he still eluded them.

McNamara was determined to understand who he was, to find him. She immersed herself in each case. With each law enforcement officer. They welcomed her. She was one of them. Her research is staggering.

Even if you are used to reading terrifying details that accompany true crime, this is one that you will need to brace yourself for. It is not easy to read. It is haunting. The crimes that the Golden State Killer committed are beyond sadistic, truly the actions of a disturbed mind. There were times that I thought about putting the book down. I wasn’t sure I could finish it. It wasn’t about what he did that intrigued me, it was about what the author was doing to find him.

That Oswalt lost his wife and was grieving, that their young daughter was left without a mother (he has since recently remarried) but he was able to take his wife’s work and put her book out in the world is nothing short of incredible. As he said: “I wanted to do right by her.”
Meer lezen
275 mensen vonden dit nuttig
Vertaal recensie in het Nederlands

Kristine Hale
5,0 van 5 sterren The light and dark side of obsession
1 maart 2018 - Gepubliceerd op Amazon.com
Geverifieerde aankoop
I made the mistake of starting this book when I didn't have an ocean of time ahead of me. Don't make the same mistake. Once you pick this book up, at the risk of sounding trite, you won't be able to put it back down.

I'm not a huge fan of the true crime genre, exactly. I've enjoyed a true crime novel now and then, but it isn't a genre I reach for often. But that said, I know the transformative power of a truly well-written crime book. Truman Capote's In True Blood introduced me to the narrative non-fiction genre, and it completely changed my life. I'll Be Gone in the Dark is the same kind of transformative book. It is the kind of genre-busting, heart-breaking, world-shaking book that will introduce a whole new generation of readers to the power of non-fiction done well.

Not only does the pitch-perfect pace grab the reader by the wrist and pull them breathlessly along, but the book walks the line between memoir and true crime in a way that has never been done so flawlessly before. McNamara takes the reader on an emotional journal that is at times shocking, entertaining, joyful and devastating.

I don't care if you are into true crime... you need to grab this book and set aside a day to wrap yourself up in its story obsession - both good and bad.
Meer lezen
326 mensen vonden dit nuttig
Vertaal recensie in het Nederlands

Katie
5,0 van 5 sterren Beautifully written
5 april 2018 - Gepubliceerd op Amazon.com
Geverifieerde aankoop
First, to everyone who angrily gave this book one star, and they are very angry for some reason, I'm posting Stephen King's words about this book: What readers need to know—what makes this book so special—is that it deals with two obsessions, one light and one dark. The Golden State Killer is the dark half; Michelle McNamara’s is the light half. It’s a journey into two minds, one sick and disordered, the other intelligent and determined. I loved this book.” —Stephen King
This is not your normal true crime book. Those books have already been written and this fact is addressed by Michelle numerous times. This book is about Michelle's time spent researching this case. So, of course, this book jumps around because it follows her and her research. She started this as notes for her website or podcast, and it grew from something she happened upon to something that she couldn't stop focusing on. She is a beautiful writer, and I was drawn into the story from the first page. The portions about her, including her childhood, at times feel like the reprieve from the darkness they were meant to be, but are not any less interesting. I would read an entire book about the crime she referenced from her childhood. That brings me to why this book was at times hard to read, besides the obvious darkness of the subject matter. Many times when I'm reading, I find myself pausing to buy everything else the author has written. Of course that is not possible here, and many times while reading I thought about her family and friends and what a horrible loss they have suffered.
I highly recommend this book to any lover of true crime. SSDGM
Meer lezen
102 mensen vonden dit nuttig
Vertaal recensie in het Nederlands
Ga naar Amazon.com om alle 1.595 recensies te bekijken 4,5 van 5 sterren
Terug naar boven
Over ons
Verkoop bij ons
We helpen je graag
© 1996-2020, Amazon.com, Inc. en dochterondernemingen