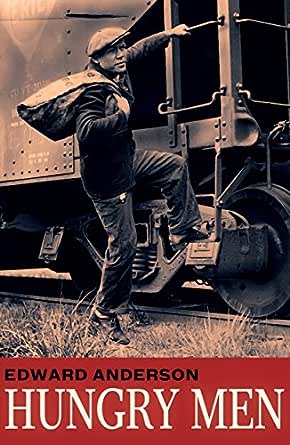 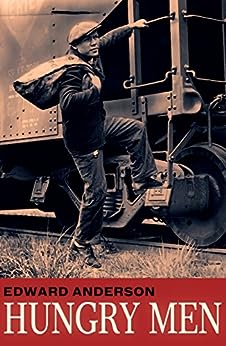 Hungry Men, first published in 1935, is a Depression-era novel portraying an unemployed musician, Acel Strecker, who travels America as a hobo, taking odd-jobs when he can, and begging for food when he can’t. His experiences, both good and bad, paint a vivid picture of life in America in the 1930s. While in New York, Acel meets and falls in love with an unemployed typist, and together they share a number of adventures. Eventually, Acel forms a street band in Chicago, but its members are arrested when they get into a fight for refusing to play the Communist anthem, the “International.” However, a sympathetic judge applauds the group’s patriotism, and Acel and company are released, with hopes for a brighter future. Author Edward Anderson (1905-1969) worked first as a journalist in the Southwest before wanderlust struck and he rode the rails, slept in parks and flophouses, and ate in soup-kitchens.
click to open popover

Michael G.
4,0 van 5 sterren History lesson.
13 juli 2015 - Gepubliceerd op Amazon.com
Geverifieerde aankoop
Hungry Men by Edward Anderson is an unsentimental look at early Depression Era America as seen through the eyes of the poorest of the poor. Men who have nothing.
Hungry Men's main character, Acel Stecker, is an erstwhile band leader who has decided to go "on the bum". His life consists of traveling from place to place largely by hitchhiking or hopping freight trains, continually risking jail time for vagrancy. Well, that isn't entirely true. Parts of the book find Acel spending significant amounts of time in New York, New Orleans and Chicago.
Anderson tells it like it was. He neither glorifies nor condemns the lifestyles of the hoboes and other rootless transients that populate Hungry Men. This is a revealing depiction of the early 1930s told from a unique perspective. Highly recommended.

Ms. WB
4,0 van 5 sterren A product of its era
19 september 2005 - Gepubliceerd op Amazon.com
Edward Anderson is a little-known author who wrote in the 1930's. Like Acel Stecker, Hungry Men's protagonist, Anderson spent time as a bum, riding the rails, playing music, and boxing.

Hungry Men is an account of the young hobo Acel, who was once a small-time musician and is now penniless. It's a brutal look at the 30's and it's chapters are short and establish different moments in Acel's traveling and the many alliances he forms. I found the friendships between the bums interesting--symbiotic as each tries to bring something to the relationship that makes him of value; meanwhile the friendship provides a sense of protection against policemen, railroad bulls, and politicians. The social dynamics make the book very interesting. Acel takes work here and there, trying to scrape together enough money to buy a cheap suit and put a girl up in a hotel. He tries desperately to find work, but is often turned down or away. Along the way he meets Lundgren, a kind, but very ill man, and Boats, the Socialist, who challenges Acel's thinking. Initially antagonists, Acel comes to adopt Boats philosophy in a surprising turn. Eventually, Acel is forced to choose between his new ideals and surviving in a society that is violent towards anything resembling Communism. The ending is subtle, but Anderson makes a strong literary and political statement through Acel's actions. The title makes the story all the more compelling, because as Acel and his fellow travellers move from state to state and camp to camp, they are always searching for sustenance. Their profound hunger for food, money, love, and acceptance is well conceived.

At times I found Anderson's dialogue clunky or Acel's speech and thought patterns a bit contrived. The conversations seem a little stilted and dated, but again, this might just be representative of the time. It took me a little while to actually get into the slightly jarring tone and to feel empathetic towards Acel, but I warmed when I began noticing that he treated all of his bum buddies fairly.

The cover on my copy of Hungry Men calls it "an American Classic". I'm not sure I would go that far, but I do believe its an honest look at the Depression. Because Anderson experienced much of what he wrote about, his descriptions are reliable. No Steinbeck, but Anderson's a decent writer and certainly has picked an interesting subject and protagonist. Recommended as historical fiction for anyone interested in turn-of-the-century writing and the Great Depression.
Meer lezen
13 mensen vonden dit nuttig
Vertaal recensie in het Nederlands
Ga naar Amazon.com om alle 2 recensies te bekijken 4,0 van 5 sterren
Terug naar boven
Over ons
Verkoop bij ons
We helpen je graag
© 1996-2020, Amazon.com, Inc. en dochterondernemingen