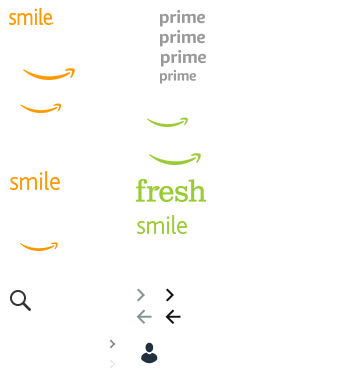 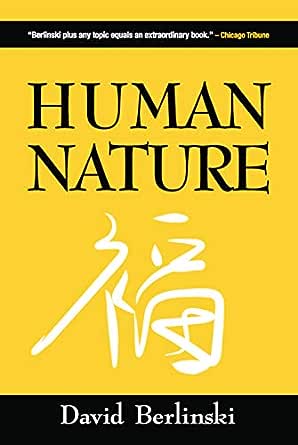 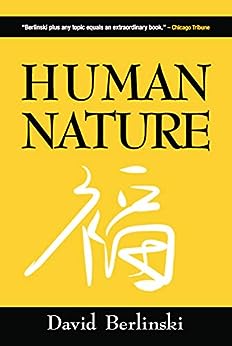 Conventional wisdom holds that the murder rate has plummeted since the Middle Ages; humankind is growing more peaceful and enlightened; man is shortly to be much improved—better genes, better neural circuits, better biochemistry; and we are approaching a technological singularity that well may usher in utopia. Human Nature eviscerates these and other doctrines of a contemporary nihilism masquerading as science. In this wide-ranging work polymath David Berlinski draws upon history, mathematics, logic, and literature to retrain our gaze on an old truth many are eager to forget: there is and will be about the human condition beauty, nobility, and moments of sublime insight, yes, but also ignorance and depravity. Men are not about to become like gods.
click to open popover

The Professor
5,0 van 5 sterren Great book
14 november 2019 - Gepubliceerd op Amazon.com
Geverifieerde aankoop
Berlinski in his latest book, using real data and observations, eviscerates a number of common myths such as humanity is becoming more peaceful and enlightened as time rolls on. I always check at documentation when reading a book, and it is in this book in abundance! From page 298 to page 320. The author includes a number of interviews originally published elsewhere, including one on Phillip Johnson, who died on November 2 1019 at age 79. Berlinski has the ability to help readers see the foolishness of many popular ideas. In his usual incisive wit, Berlinski covered the Blind Watchmaker, i. e. evolution, which is not only blind, but also deaf and dumb as well, yet made the universe and all life in it. One supporter of the blind watchmaker was Motoo Kimura who introduced his neutral theory which, on the molecular level, was entirely stochastic, meaning molecular (actually genetic) drift produces genetic changes, and those that happened to be helpful were preserved, if not, they were destroyed. He called his theory of evolution The Neutral Theory. Johnson called it self-serving gibberish, and Berlinski called it the enigma. (p. 124). Berlinski writes he “has never supported the theory of intelligent design” but some events may cause him to change his mind. One, he noted, was “nothing so commends the theory to my attention as efforts by the scientific establishment to suppress it.” (p. 119). He then gives an egregious example. Clearly, bias was the reason for the troubles of those who reject the idea that a blind and deaf and dumb watchmaker made the world and all life in it. Or that random errors made the world and all life in it. Excellent book showing the foolishness to those who accept such ideas.
Meer lezen
37 mensen vonden dit nuttig
Vertaal recensie in het Nederlands

Clay Garner
5,0 van 5 sterren ‘The human mind infinitely surpasses the powers of any finite machine’ - Gödel
27 november 2019 - Gepubliceerd op Amazon.com
Geverifieerde aankoop
“So the following disjunctive conclusion is inevitable,” Gödel writes, “Either mathematics is incompletable in this sense, that its evident axioms can never be comprised in a finite rule, that is to say, the human mind (even within the realm of pure mathematics) infinitely surpasses the powers of any finite machine, or else there exist absolutely unsolvable Diophantine problems of the type specified.”

Berlinski is a mathematician. And he doesn’t apologize for that in this work. Mathematical ideas, symbolic logic, philosophical ideas expressed in mathematical notation, are all used. (In fact, reminds me of George Steiner, another erudite professor. Both hope (assume) readers can keep up. If not . . . )

“Neuroscience is going to require decades or even hundreds of years to understand the deep principles. There is progress at the very lowest levels of neuroscience. But for issues of higher cognition—how we perceive, how we remember, how we act—we have no idea how neurons are storing information, how they are computing, what the rules are, what the algorithms are, what the representations are, and the like. So we are not yet in an era in which we can be using an understanding of the brain to guide us in the construction of intelligent systems.’’

Science is amazing. It has limits. Accept it.

“The prevailing assumption in evolutionary science,” he wrote, “seems to be that speculative possibilities, without experimental confirmation, are all that is really necessary.”

After I read Darwin’s book, I reached the same conclusion. Darwin offered possible explanations, ideas that might work, interpretations that could function. He says so throughout. This is not proof, this is hope. Remember Newton proclaimed - ‘I make no hypothesis’. Darwin does.

“This is wrong only to the extent that speculative possibilities without experimental confirmation are often all that is really possible. Every paleontologist writing since Darwin published his masterpiece in 1859 has known that the fossil record does not support Darwin’s theory.’’

This is not controversial. It’s just not remembered. Berlinski does . . .

“Questions about the origin of species were resolved in the best possible way: there are no species and so there is no problem. Inasmuch as the historical record suggested a discrete progression of fixed biological forms, it was fatal to Darwin’s project. All the more reason, Darwin argued, to discount the evidence in favor of the theory. “I do not pretend,” he wrote, “that I should ever have suspected how poor a record of the mutations of life, the best preserved geological section presented, had not the difficulty of our not discovering innumerable transitional links between the species which appeared at the commencement and close of each formation, pressed so hardly on my theory.”

This is typical Darwin. Modest, self-depreciating, soft-spoken. Well . . . what else can he do?

“There is some evidence that once again, the diapason of opinion is being changed. The claims of intelligent design are too insistent and too plausible to be frivolously dismissed and the inadequacies of any Darwinian theory too obvious to be tolerated frivolously. Time has confirmed what critics like Phil Johnson have always suspected. Darwin’s theory is far less a scientific theory than the default position for a view in which the universe and everything in it assembles itself from itself in a never-ending magical procession. The religious tradition and with it, a sense for the mystery, terror, and grandeur of life, has always embodied insights that were never trivial.’’

Berlinski’s opinions enlighten some, infuriate others.

“The nineteenth century came to its end in August, 1914, and with it, the ascending trajectory of European civilization. “The War was an unprecedented disgrace to the human intellect,” R. G. Collingwood remarked in his autobiography, but whatever the disgrace, the war was a disaster for the civilization that made it possible.’’

This focus on the destructive cultural impact, the devastating moral earthquake, is directly addressed.

“The consequences of the First World War were ramified throughout Europe and the world. Four world empires had advanced into battle during the beginning of the war and withdrawn into oblivion at its end. If the Axis powers failed properly to calculate the cost, or the nature, of defeat, the Allied powers neglected to consider the price, or the consequences, of victory. The global economic order stood compromised. Free trade did not return to pre-war levels until the late twentieth century. The European standard of living declined after the First World War, and in Russia, Germany, and the Balkans, it declined dramatically.’’

Historical knowledge has almost disappeared from the mind of most. Berlinski wants to reintroduce this . . .

“ Civil liberties within the Allied countries were abridged to ensure victory, and among the Axis powers, to avoid defeat. They did not recover.’’

“An analysis of the First World War fully adequate to its magnitude would require a work comparable to St. Augustine’s The City of God. Augustine quite understood that no tracery of causes and their effects could begin to explain the historical catastrophe enveloping the Mediterranean world as an ancient and profound order among men underwent dissolution. Augustine could grasp what he could not otherwise explain only by a radical reinterpretation of human history. The categories to which he appealed are no longer available to historical analysis.’’

We living at the end of two thousand year old movement. What will now happen?

“And this, too, was a fact expressed by the First World War and ratified thereafter by its historians. The First World War was a catastrophe for European civilization because it destroyed its moral structure. The war demonstrated to European statesmen and their military leaders that they had misjudged, and misjudged profoundly, the ground over which they were walking.’’

“The war allowed the sewers of nineteenth-century history to break the surface of European life and for thirty years they foamed and bubbled over every European institution, blighting whatever they touched with their own ghastly iridescence. In both Nazi Germany and Soviet Russia, novel forms of political organization appeared, and while historians may have exaggerated their resemblance to each other, both were radically unlike any structures that had appeared in the past. When the twentieth century stands condemned, it is not simply because of the terrible, the unpardonable, things that took place within its ambit, but because it introduced into the human imagination possibilities of political organization that were bleak and unrelieved and terrible. Once seen, these possibilities could not be unseen. No one doubted that European society had been weighed in the balances and found wanting.’’

Recall Revelation 13:1 “And I saw a wild beast ascending out of the sea, with ten horns and seven heads, and on its horns ten diadems, but on its heads blasphemous names. Now the wild beast that I saw was like a leopard, but its feet were like those of a bear, and its mouth was like a lion’s mouth. And the dragon gave to the beast its power and its throne and great authority.’’

I. VIOLENCE
1 The First World War
2. The Best of Times
3. The Cause of War

V. LANGUAGE
18. The Recovery of Case

This work seems (almost) like a last will and testament of an intellectual, meditative, analytical,, insightful, erudite, sincere . . . Jewish rabbi (prophet).

Worried, discouraged, frustrated, concerned, puzzled. Wanting to help, but really, what to do? What to say? To who? How?

Some easy to connect to his theme on ‘Human Nature’, others . . . nevertheless, can give glimpse to new places.

Written more to his critics . . . or maybe for serious reader who has wants alternatives to mainstream secular, superficial, materialistic assumptions.

I found it more difficult than most. Worth it!

Some short, others add real insight; several linked to source

JDC
2,0 van 5 sterren Self Indulgent
14 december 2019 - Gepubliceerd op Amazon.com
Geverifieerde aankoop
The author has things to say but unfortunately his self indulgent way of presenting his ideas makes this book a tough slog that few readers will see to conclusion. For whatever reason he uses mathematical and symbolic notation to present many of his ideas and writes English in the most opaque way possible -- so if you did not give up on the mathematical notation, you will most certainly give up on his obscure allusions and penchant for putting things in foreign languages. It is peculiar why someone would chose to write this way, to show how clever he is rather than to communicate ideas.
Meer lezen
2 mensen vonden dit nuttig
Vertaal recensie in het Nederlands

Edmund Jimenez
3,0 van 5 sterren Incoherence and unrelatedness
6 december 2019 - Gepubliceerd op Amazon.com
Geverifieerde aankoop
“Men go to war when they think that they can get away with murder.”

The above sentence concludes the essay, The Cause of War, in David Berlinski’s new book, Human Nature. The statement, while unoriginal, surely implies a dark aspect of our nature. Unfortunately, such clear exposition is not evident in the remaining essays, portraits and interviews.

Some of the book’s pieces are interesting, and some less so; in fact, chosen subjects are often bizarre, including one wholly in French. In any case, what is their connection to the large subject of human nature?

As always, Berlinski writes extremely well, though sometimes eccentrically, with a mysterious sentence here and there. He can be very funny, too, when discussing a serious matter—or any matter. I laughed out loud more than once while reading.

The notes section is a treat because of the elaborations therein.