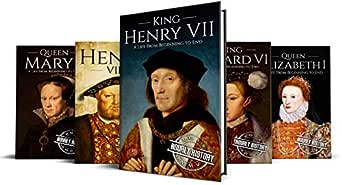 House of Tudor: Discover the Remarkable Lives of the Tudors (English Edition) Kindle-editie

Discover the Remarkable Lives of the Tudors...

Five Books in One + Free BONUS Inside!
So if you want a concise and informative book on the Tudor Kings and Queens, simply click the "Buy now" button for instant access!

Henry VII was not destined to be the well-known (or perhaps better described as infamous) king that his son was after him, but his place in history remains important. With his victory over Richard III in 1485, Henry brought England out of the Middle Ages and ushered it into the modern era. His reign ended decades of bloody civil wars and provided the wealth and stability necessary for commerce and art to thrive in England. When Henry’s son, Henry VIII, ascended the throne in 1509, it marked England’s first uncontested transfer of power in almost 90 years. This fact alone is a testament to Henry’s achievements.

Since his death in the year 1547, King Henry VIII has been celebrated as a chivalrous pioneer and reviled as a brutal tyrant, but he has never been ignored. Henry was responsible for the separation of the Church of England from the Roman Catholic Church, the ramifications of which reverberated through subsequent centuries of European history. Domestically, Henry revolutionized the English Constitution, elevating his own status to that of a God.

Edward VI, the only legitimate male heir of King Henry VIII, took his seat on the throne at the age of nine. His life would come to an end when he was only fifteen years old, but the mark he would come to leave on England’s history has endured to this day. This part of the Tudor period was chock-full of social unrest and economic struggles as well as turmoil over religious reforms, which the young king and his advisors often made worse by imposing substantial changes on their subjects.

Mary I, perhaps best known by the moniker Bloody Mary, was England’s first female monarch who ruled in her own right. A fighter from birth, she was the only surviving child of Henry VIII and his wife Catherine of Aragon. Mary would make her way back to her father’s good graces after being cast out by him in favor of his numerous wives and would eventually undo her father’s religious reforms by restoring Roman Catholicism in England. The fourth Tudor to rule England, Mary is remembered for burning around three hundred Protestants at the stake on her quest for religious reform.

There are many versions of Queen Elizabeth I of England; the beautiful young Tudor Queen courted by all the princes of Europe; a fearless virgin warrior in white velvet, rousing her troops on the battlefield; an irascible old woman in a powdered wig, surrounded by fawning young men. A formidable woman, Elizabeth I ruled alone at a time when Europe was a hotbed of conflict, dominated by empire-seeking Kings with opposing religious beliefs.
click to open popover

Kindle Customer
4,0 van 5 sterren Great read.
23 december 2019 - Gepubliceerd op Amazon.com
Geverifieerde aankoop
If you don’t have the time to read and thirst for knowledge, these series of books will satisfy you. Short, full of knowledge and at a great price.
Meer lezen
Vertaal recensie in het Nederlands