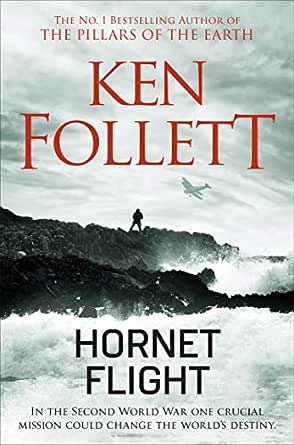 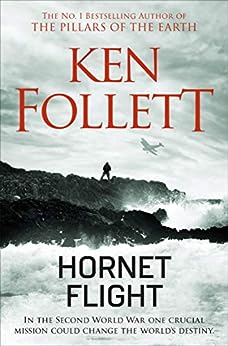 From the master storyteller, Ken Follett, Hornet Flight is a startling thriller set amidst the Danish Resistance.

Europe in Darkness
1941. The Nazis have Denmark in their vice-like grip, their malign presence corroding everything its inhabitants hold dear. Even the police betray their countrymen and work with the Gestapo to hunt down spies.

A Glimmer of Hope
In this hostile climate the Danish resistance discover a secret that could change the course of the war – proof of an advanced German radar installation that is causing catastrophic losses to Allied planes bringing the fight to Germany.

A Dangerous Mission
The resistance must get the information to the British and will have only one chance, using a near-derelict Hornet Moth bi-plane mouldering away in a church. If they succeed the balance of the war will be tipped in the Allies’ favour but failure will see them killed . . .

TexasGal
4,0 van 5 sterren Good Book - pleasantly surprised that I would like it so much......
28 augustus 2018 - Gepubliceerd op Amazon.com
Geverifieerde aankoop
I'm an unabashed WWII espionage buff and so when I saw what this was about, even though Ken Follett is more of a lecturer-type than a spy mystery storyteller, I decided to give it a go! I didn't know alot about Denmark's position during WWII, but was very surprised how important/involved it was with so many powerful countries at that time of the war - Nazi Germany, Russia, France, Italy and Britain. British Intelligence and its need of vital information of German military posts throughout Denmark and other coastal towns to aid in the flights of RAF and American planes bombing Germany and other Nazi held countries is the priority here. The use of everyday people - some qualified, some not - but all with the common goal of defeating Hitler combine to make this a real page turner.
Meer lezen
4 mensen vonden dit nuttig
Vertaal recensie in het Nederlands

H NEILL
3,0 van 5 sterren The Saturday Matinee at the Local Movie House
16 februari 2016 - Gepubliceerd op Amazon.com
Geverifieerde aankoop
Not one of Follett's best. Every conceivable barrier to the completion of their mission was dreamed up and predictably defeated. The only problem was there were so many of them that it became tiresome just reading them all, knowing that they would be solved and most everyone would live happily ever after. It brought me back to the Saturday matinee days when the hero seemed to be killed twenty times until the following Saturday when you found out that he miraculously survived.
Meer lezen
17 mensen vonden dit nuttig
Vertaal recensie in het Nederlands

Hank Lajoie
5,0 van 5 sterren Birth of A Resistance Movement
30 juli 2018 - Gepubliceerd op Amazon.com
Geverifieerde aankoop
When the Danish quietly welcomed the Germans into their country to avoid armed conflict, the citizenry was split on their opinions of such a move. It all seemed to be going so smoothly, until MI6 started a “Night Watchman” movement; a group of young spies. The early German experiment with radar was causing devastating losses to the English bomber missions.When Hitler invaded Russia, Stalin requested the English increase their bombing of German targets in order to draw off some of the Luftwaffe action on the eastern front. Crucial to the ability of the English to do that was gaining knowledge of what the German radar was all about and where it was. A group of unlikely spies become heroes, including schoolboys, a ballerina and an MI6 agent with a major supporting character of a Hornet; a rickety, old airplane. A quick, fast-paced read ... but then, it’s Ken Follett.
Meer lezen
3 mensen vonden dit nuttig
Vertaal recensie in het Nederlands

Myron M. Miller
5,0 van 5 sterren An Exciting Resistance Story
17 april 2019 - Gepubliceerd op Amazon.com
Geverifieerde aankoop
With the story rooted in historical reality, Follett gives an account of both the cost and the courage demanded of those that fought against the Nazi occupation of Denmark.

The strength of the novel is that it puts the reader into the emotional stress that is demanded of courageous opposition to an oppressive puppet regime. Then he weaves a couple of believable romances into the mix, and produces the tension of both a destroyed love and a triumphant love.

The end, packaged into an epilogue, ends too quickly to satisfactory resolve the challenge which results from delivering the intelligence needed in London. A shortcoming that is partially redeemed by a paragraph final note on the effect of the Danish resistance movement.

Torben Brams
5,0 van 5 sterren Horrible Accent in the Audible Narration
20 mei 2016 - Gepubliceerd op Amazon.com
Geverifieerde aankoop
I purchased the audible narration as well and must say that the accent used for Danish voices in this book is way off. We do have quite a distinct and easy to recognise accent unfortunately... but this is not it. That detail kept annoying me throughout the book - to me it comes across more like Russian English, certainly not something I would like to be associated with as a Dane ;-)
Meer lezen
8 mensen vonden dit nuttig
Vertaal recensie in het Nederlands
Ga naar Amazon.com om alle 575 recensies te bekijken 4,4 van 5 sterren
Terug naar boven
Over ons
Verkoop bij ons
We helpen je graag
© 1996-2020, Amazon.com, Inc. en dochterondernemingen