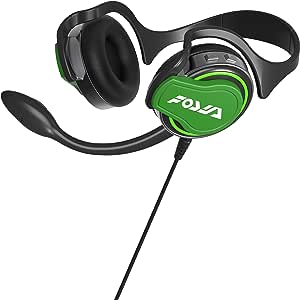 Officially licensed by Nintendo. Dive into Splatoon 2 with HORI's Splatoon 2 Splat & Chat Headset, the first chat-enabled headset for the Nintendo Switch. Enjoy in-game sound and voice chat at the same time in Splatoon 2's online multiplayer mode. Strategize with friends in the SplatNet 2 online lobby, then communicate with teammates during the heat of battle! This headset was designed as a replica of the male Inkling character's in-game headset, and it features interchangeable decorative plates to reflect your personality.

bryssa
2,0 van 5 sterren Purchase it for the mixer, toss the headset
26 juli 2017 - Gepubliceerd op Amazon.com
Geverifieerde aankoop
Let's get this out of the way: the way voice chat is implemented on Switch is ridiculous for a whole host of reasons. It sucks, nobody's happy with it, and nobody's going to use it without a major overhaul - but that's not what I'm reviewing. I'm reviewing this specific headset with the added mixer as a work around to the travesty of a smartphone app they want us to use.

So, with that said: as you may have suspected from the price tag, the headset is awful. It's novel for being a replica of the in-game item but it fails as an actual headset for a few reasons:

1. Too small - if you're not a small child and/or have much hair on your head, this is going to be a no go immediately.

2. Non-adjustable - It's one size fits all (or, more accurately, hardly anyone), so you either have the perfect head shape and amount of hair required to allow this to sit comfortably or you're going to have a bad time. Mine would only sit in a way that had the ear pieces hovering over my ears rather than flush while the back of the headset rested near my neck instead of behind my head.

3. Poor sound quality - It'd be serviceable for voice chat alone but when combined with the mixer and used as intended it's a really poor experience. It doesn't output anywhere near enough volume to handle in-game sound (and what's there is really flat with hardly any bass), let alone with voice chat on top.

4. Tinny mic - the mic mostly works and is positioned well with the added benefit of being removable, but I was noticeably tinny sounding to friends when using it. This is livable and could even be swapped with another mic since it uses a standard plug but why on earth would you bother considering how bad the rest of the headset is?

The mixer, however, works really well as long as you bring your own headset. I tested it with my HyperX Cloud II headset using Discord's phone app and it honestly worked a treat - everything was really clear and easy to use. Hori included a sizable extension cable to allow you to comfortably connect to a docked Switch while also not being overrun with a too long cable while in handheld/tabletop mode. There's better mixers out there but I'm not so sure you can find one for $30 that's this small and compact that outputs in stereo, making this a really interesting value proposition.

I was tempted to give this three stars just for the mixer - it's something I can see myself using even outside of my Nintendo Switch. Combined with Discord and a much better headset (and ignoring the ludicrous situation we're in that requires it), it does the job I was looking for and I don't find it overpriced from that perspective.

Either toss the headset or keep it as a novelty item, but don't factor it in when deciding if the mixer is worth $30 for somewhat sensible voice chat or not.
Meer lezen
64 mensen vonden dit nuttig
Vertaal recensie in het Nederlands

Chris S.
4,0 van 5 sterren Big heads beware
28 augustus 2017 - Gepubliceerd op Amazon.com
Geverifieerde aankoop
So I didn't have great expectations going into this with the price point. However the mixer is excellent and does it's job. For those of us old guys/gals that are playing this childrens game WARNING - the headset fits a max of like maybe 8 year old, or a tiny headed 10 year old. I mean I'm not some big headed wierdo (or at least I think I'm not) but there is 0 way that this headset is going on my noggin, like none, nodda, ain't happening.

With that said. I've used a nice beats-like headset as well as some ear buds and they work great. So if you are a big kid playing a little kids game be warned you will probably need to roll your own headset for this gear. Otherwise the mixer does what it's supposed to.

Oh ya - also another warning. So my switch and my PC are on the same circuit/battery backup - BUT I get a HORRIBLE hum trying to use the audio from my PC for discord. So I had to switch to using my cell phone for the audio due to the ground loop hum. Haven't spent a lot of time on it yet, but just something to be aware of.

For all the negative reviews, remember - you need an audio MIXER not a SPLITTER to make this work as designed, and $30 is WAY below any mixer I could find.

Joshua Y. Yuan
3,0 van 5 sterren ok headset, better as a cosplay item
24 september 2017 - Gepubliceerd op Amazon.com
Geverifieerde aankoop
i'm not going to review the app you're supposed to use with it because i think it's silly. though it comes with that adapter and stuff, really the headphones themselves are a headset-with-mic 3.5mm connector so you can use it like a normal headset elsewhere.
The thing looks pretty good as far as being a prop from splatoon, maybe cheap and plasticky like a toy but what did you expect? sound quality if actually not awful if you can get the thing to actually stay directly on your ears, my big head doesn't actually fit so it sounds tinny unless i gently push it to my ears. the head thing is not adjustable so if it bends funny to your possibly oversized head like mine, you're out of luck.
the microphone sounds passable; usable, but i wouldn't record or track any music with it or anything.

i think this would be good for kids or ppl with not-huge heads, but really i think it's mostly good as a cosplay prop, having both green and pink color plates is neat.
Meer lezen
6 mensen vonden dit nuttig
Vertaal recensie in het Nederlands