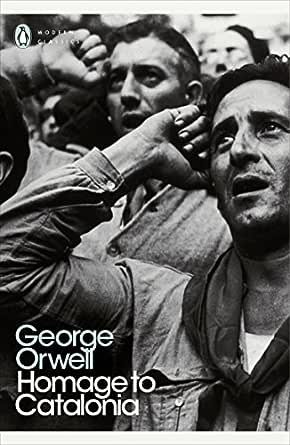 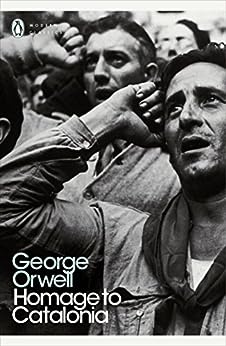 'An unrivalled picture of the rumours, suspicions and treachery of civil war' Antony Beevor

Every line of serious work that I have written since 1936 has been written, directly or indirectly, against totalitarianism and for democratic Socialism as I understand it'. Thus wrote Orwell following his experiences as a militiaman in the Spanish Civil War, chronicled in Homage to Catalonia. Here he brings to bear all the force of his humanity, passion and clarity, describing with bitter intensity the bright hopes and cynical betrayals of that chaotic episode: the revolutionary euphoria of Barcelona, the courage of ordinary Spanish men and women he fought alongside, the terror and confusion of the front, his near-fatal bullet wound and the vicious treachery of his supposed allies.

A firsthand account of the brutal conditions of the Spanish Civil War, George Orwell's Homage to Catalonia includes an introduction by Julian Symons.

Gary Moreau, Author
5,0 van 5 sterren A handbook for understanding the lunacy of today's tribal politics - and a great story
5 november 2018 - Gepubliceerd op Amazon.com
Geverifieerde aankoop
Few wars in history have attracted the interest of more literary celebrities than the Spanish Civil War (1936-1939). (In addition to Orwell, who actually fought in the war, Hemingway and Emma Goldman famously covered it.) Almost no war, however, is both more pivotal to 20th century history and less understood by young and old alike today.

That it was a complicated war is a profound understatement. While it was, on the surface, a face off between the Nationalists and the Republicans, the participants represented a dizzying array of political affiliations—fascists, anarchists, socialists, revolutionaries, communists, and an impressive contingent of foreigners generally supportive of Western democrat principles.

More famous for “Animal Farm” and “1984”, both of which were written later, this might be Orwell’s most insightful book. Contrary to other great writers who gained profound insight through their genius, Orwell gained his insight through his unwavering realism and ability to see things for what they are. (The realism is so candid, in fact, that you will laugh out loud in places where other authors might make you sigh in despair.)

In this case he dispels the romanticism of war and the idealism of communism. While the intelligentsia around the world were debating the lofty ideals of the proletarian struggle, the democratic ideal, and the dignity of all men, Orwell points out, life in the trenches is far less political. The priorities there are warmth, sustenance, and, if you’re lucky, a useable weapon.

Franco and the Nationalists/Fascists won the war, Orwell ultimately concludes, not for any ideological reason, but for the simple reason that they had better weapons and a more robust supply chain, thanks to the support of Italy and Germany. The Republic enjoyed no foreign support other than that of Russia, ironically enough, but the Russian agenda was ultimately not Spain, but the Stalinist brand of communism.

This is, I believe, a hauntingly relevant portrayal, with different names, of the current political situation in much of the West. The diversity and range of our political tribes and sub-tribes is mystifying, to say the least. In the US, for example, there are the never-Trump conservatives, the traditional conservatives, the centrists, the liberals, the progressives, the socialists, and, of course, the Trumpers.

All of these tribes, however, are defined by romantic ideals, in much the same way that the parties to the Spanish Civil War were. Seldom, however, do those ideals touch down in the reality people actually face in their day-to-day lives. And it is this disconnect, I believe, that is at the heart of the anger, frustration, and resulting hostility the US is experiencing today. Ideals are not reality.

Sometimes, as in this book, it is the mundane and simple aspects of reality that give rise to the most profound idealism. That is certainly the case here, where Republican soldiers at the front were cooperating and forging connections between tribes while their counterparts, far removed from the fighting, were literally killing each other based on minor and little understood or relevant differences in ideology that few people could even articulate.

Orwell wrote a masterpiece, and he wrote it well, and I strongly suggest you indulge in it. It is a much more contemporary story than you might expect.
Meer lezen
33 mensen vonden dit nuttig
Vertaal recensie in het Nederlands

Todd C.
1,0 van 5 sterren Stay away from Kindle edition
20 februari 2017 - Gepubliceerd op Amazon.com
Geverifieerde aankoop
Book itself is good but the kindle edition formatting is unbelievably bad. Words constantly show up with underscores before and after _like_ _this_. I think those are supposed to be italicized words. Every time there is a single quote mark before a t the t shows up really small for some reason. Also, there are paragraph breaks at seemingly random points, often in the middle of sentences. This was clearly a poorly done machine scan with no copy editing done at all.
Meer lezen
59 mensen vonden dit nuttig
Vertaal recensie in het Nederlands

The text is well written, the images vivid, the characters well drawn. This is enlightening look at one of the darker chapters in history.
Meer lezen
33 mensen vonden dit nuttig
Vertaal recensie in het Nederlands

CJ In Texas
5,0 van 5 sterren Great read and insight into Spain from it's civil war in the 30s to give you a grip on what and why things are now.
11 januari 2018 - Gepubliceerd op Amazon.com
Geverifieerde aankoop
With the Spanish/Catalonian secession thing going on, I wanted to get smarter on it. Have heard small glimpses about the Spanish civil war in the context of Franco and WWII (some help from Germany), but I realized I knew absolutely nothing about it. Well, this book is illuminating into what Spain is all about and why it's people are as eclectic as its history. Doesn't hurt that it's a first person account from Mr 1984/Animal Farm himself-pretty cool I think.

If you think US politics are confusing, wait till you try to sort out Spain in the 1930s. Did you know Northern Morocco was part of Spain then? Think you know where Socialists, Fascists and Anarchists are on the political map? You may end up using some of the blank pages to try to map all that out, because it is not that straight forward at all.

Orwell and his wife almost lost their lives there, both from government fascist forces and from socialist/communists. The latter perhaps more guilty of genocide in this case in terms of wiping out the Anarchists and using democratic process as a means to soviet communism. And Franco's Fascism persisted until his death in 1978...
Meer lezen
17 mensen vonden dit nuttig
Vertaal recensie in het Nederlands

A frustrated reader
1,0 van 5 sterren avoid the poorly produced print on demand version
30 november 2017 - Gepubliceerd op Amazon.com
Geverifieerde aankoop
This review is for the "Will Jonson/Dog's Tail Books" sold by Amazon (red cover). This is not a real published book, just some print on demand thing. It looks like it was made by someone who had never seen a book before. There is no front matter, there are no chapter breaks, and the text is ragged right (not justified). It's in a horrible font, and printed on laser paper instead of book paper.
Meer lezen
30 mensen vonden dit nuttig
Vertaal recensie in het Nederlands
Ga naar Amazon.com om alle 408 recensies te bekijken 4,3 van 5 sterren
Terug naar boven
Over ons
Verkoop bij ons
We helpen je graag
© 1996-2020, Amazon.com, Inc. en dochterondernemingen