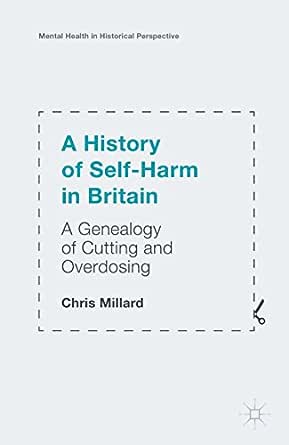 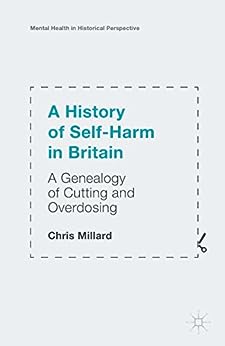 A History of Self-Harm in Britain: A Genealogy of Cutting and Overdosing (Mental Health in Historical Perspective) (English Edition) 1st ed. 2015 Edition, Kindle-editie

"The monograph's focus on self-harm as a constructed part of broader changes in cultural, social and political spheres provides a welcome counterweight to other histories of self-harming behaviours that have predominantly focused on psychological and psychiatric theory and practice, and it makes a weighty contribution to our understanding of the shifting conceptual frameworks of self-harm in twentieth-century Britain." (Sarah York, Medical History, Vol. 60 (4), October, 2016)

"This is a brave and provocative book. By narrating the complex history of self-harm in the decades after the Second World War, Chris Millard achieves far more than simply illuminating what has become a prominent mental health issue for modern populations. He also encourages us to rethink how we conceive and write history and how we might better understand and question current political preferences for individualised, rather than social, explanations of mental distress. With a distinctive authorial voice, Millard's work provides a constructive model for the next generation of social historians of psychiatry." Mark Jackson, University of Exeter, UK

'Through a focus on Britain between the 1940s to the 1980s, Millard reveals how the self-harm subject was always more than a product of disembodied psychological and psychiatric theory and practice; it was inextricably a constructed part of changing social, political and ideological times. He thus defies the reigning ahistoricity and naturalization of the subject in its historiography, as well as challenges the current historically transcendent neurobiological constructions of self-harm. Acute and committed, this is critical history at its most productive.' Roger Cooter, Warwick University, UK
Alle bekijken
click to open popover