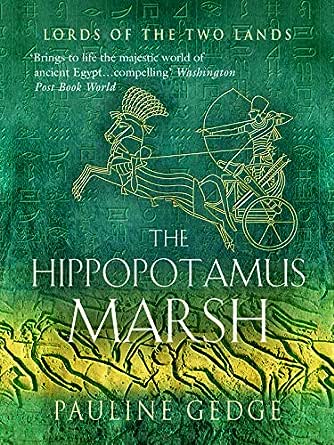 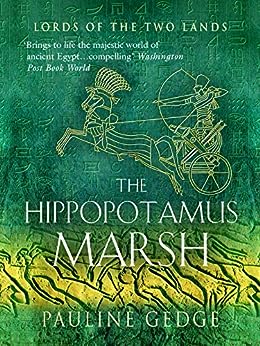 What could drive a man to revolt against an all powerful Pharaoh?

Seqenenra Tao, Prince of Waset, will lead the a revolt against the the Hyksos, interlopers who have ruled Egypt for over two hundred years. Descendant of the last true pharaohs, Seqenenra Tao must rally the native princes of Upper Egypt to rebel against the foreigners, their alien gods and barbarous ways.

The quiet Tao family, with their deep devotion to their god Amun, are driven to resist by the increasingly ridiculous demands of the Hyksos, made in an effort to humiliate and degrade them. Together they must overcome their fear of going to war, knowing what the outcome will almost certainly be death…

The Hippopotamus Marsh begins an epic trilogy that brings to vivid life the passions and intrigues which ushered in the great Eighteenth Dynasty, perfect for fans of Bernard Cornwell and Christian Jacq.

‘An Egypt so real and complete that I sank into it utterly … what a triumph’ Cecelia Holland, author of the Corban Loosestrife series

Stuart W. Mirsky
4,0 van 5 sterren A Fine Depiction of an Ancient World and People
15 juli 2001 - Gepubliceerd op Amazon.com
Geverifieerde aankoop
Although rather slow and ponderous during its initial 40%, this book paints a full and realistic picture of the world of ancient Egypt and its noble houses. One gets a real feel for the time and place in which these people passed their lives and of the cultural attitudes and values which might have driven them. This is the tale of the gradual awakening of the ancient royal house of Egypt to a "need" to confront the ruling Hyksos who have held power over the land, as the story opens, for the preceding 200 years.

Sequenenra Tao, the scion of his ancient family, rules as governor in the provincial backwater territory of Weset in Upper Egypt. Although he is descended of a long line of ancient Egyptian kings, he is nevertheless subjected to numerous petty humiliations by his Hyksos overlord, the Pharaoh Apepa. When these grow to be too much for the proud Tao family, Sequenenra feels compelled to act. And yet there is treachery everywhere, and even within his own household, a treachery which will alter the course of events that the governor of Weset reluctantly sets in motion.

This is a fine tale, indeed, and the last 60% of the book is, if not entirely compelling, certainly a very interesting read and will hold the intelligent reader through to the end. The tale promises more in subsequent volumes, too (it's billed as a trilogy and I will be reading the next volume, given the quality of the first). The characters are also vividly drawn and an integral part of this tale which is more than one of mere battles and adventure. A good read and one I have no qualms in recommending . . . or in reading further myself!

Diana Faillace Von Behren
4,0 van 5 sterren Ancient Egypt Comes Alive
28 juni 2003 - Gepubliceerd op Amazon.com
Geverifieerde aankoop
Pauline Gedge again recreates an Egypt long gone in this first book in a wonderfully detailied trilogy about the reclaiming of Egypt's throne by the Taos: Seqenenra, and his three sons, Si-Amun, Kamose and Ahmose from the Hyksos that wear the two crowns. Seqenenra and his family lives in relative peace far from the influence of the usuper's court, yet he seethes within from the indignity of being a true Prince of Egypt that will neve be king. Add to this the Hyksos king, Apepa's fear that Seqenenra symbolizes a threat to his sovereignty and his constant baiting of Seqenenra to commit an act he can define as treasonous. Apepa throws down the final gauntlet when he demands that Seqenenra silence the hippopotami that inhabit Seqenenra's marshland simply because the beasts are disturbing his sleep. What follows is the recounting of a last ditch effort by Seqenenra to reclaim what he feels is rightfully his in the only way he knows how: war. The repercussions of his plans echo throughout his household and Gedge does a fine job of allowing each of the main characters an airing of their point of view as each acts out of his own sense of duty and honor to family and country. Gedge punctuates a simple story with much detail about the daily lives of the ancient Egyptians--the reader can feel the heat, rejoice in the flooding of the Nile, almost smell the scent cones worn on the head and commiserate with the affront to the dignity of these proud people of the bloodline of great kings considered gods. Recommended to all who love Gedges's other works of historical fiction and all those who are fascinated by Egypt and its kings.
Meer lezen
Vertaal recensie in het Nederlands

Evelyn D. Batchelor
5,0 van 5 sterren Egyptian Novel
16 februari 2013 - Gepubliceerd op Amazon.com
Geverifieerde aankoop
Pauline Gedge is an author whose writing I enjoy. This is a trilogy. In the middle of the Seventeenth Dynasty descendants of the last true pharaohs rally the native princes of Upper Egypt to rebel against the foreigners who have taken control of Egypt. Volume I begins the trilogy that brings to vivid life the passions and intrigues which ushered in the great Eighteen Dynasty.

Well written and I was happy that I'd bought all 3 books.
Meer lezen
Een iemand vond dit nuttig
Vertaal recensie in het Nederlands

RJL
5,0 van 5 sterren The 1st volume of a Great Trilogy!
14 april 2010 - Gepubliceerd op Amazon.com
Geverifieerde aankoop
I had read "The Lady of the Reeds" prior to starting on this trilogy. I couldn't wait to get into it and wasn't disappointed! Gedge provides a brilliant and georgeous setting for each of her books. They have obviously been well researched by her assistant and Ms. Gedge. If you are looking for an easy read that you can put down whenever you have something else to do, DON'T GET INTO THIS SERIES! The books are impossible to put down as Gedge introduces and builds up each character. I've become an ardent fan of this author, having read six books so far and have four more on order!
Meer lezen
Een iemand vond dit nuttig
Vertaal recensie in het Nederlands