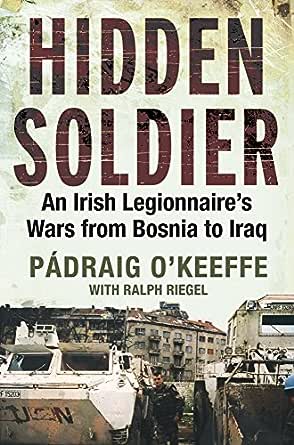 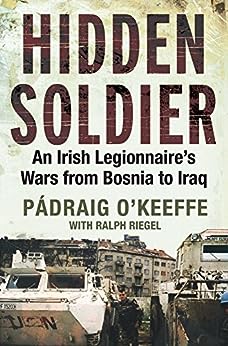 Pádraig O’Keeffe joined the elite and secretive French Foreign Legion at the age of twenty, seeking a challenge that would absorb his interests and intensity. He served with the Legion in Cambodia and Bosnia, then returned to civilian life, but military habits would not allow him to settle.

His need for intense excitement and extreme danger drove him back to the lifestyle he knew and loved, and using his Legion training, he became a ‘hidden soldier’ by opting for security missions in Iraq and Haiti.

In Iraq he was the sole survivor of an ambush in no man’s land between Abu Ghraib and Fallujah, the most dangerous place on earth.

An intense, exciting and vivid account of extraordinary and sometimes horrific events, Hidden Soldier lifts the veil on the dark and shadowy world of security contractors and what the situation is really like in Iraq as well as other trouble spots.

This bestseller also includes photographs taken by Padraig O’Keeffe while he was a Legionnaire and when he was in Iraq.

D.S.Dk.
5,0 van 5 sterren How is this guy still alive?
15 juli 2015 - Gepubliceerd op Amazon.com
Indeling: Kindle-editieGeverifieerde aankoop
It's seldom I buy a book that I can't put down.........but this sure was on of the few.

Apart from being a born soldier, this guy is also a natural story teller. And every page is as gripping as the previous one!
From entering the Legion, to Bosnia, to Iraq, and on to Haiti this guy tells his story. From earning his kepi to the horrendous ambush in Iraq that he was lucky to survive.

Another thing about this book that I like is that throughout his life as a soldier, pride and ethics are something that the author has never lost sight of. Even in the face of some unimaginable atrocities!

You ever hear the old cliche......"Some people live more in 20 years than other people live in a lifetime."
Well, after reading this book I think I understand, just a little bit, what it means.
I really can't recommend this book highly enough.

Read and enjoy! And to the author, thank you for sharing your story!

Another Foreign Legion account detailing the harsh nature of the Legion. Not your grandpa's Legion but still tough nonetheless. The Legion has an absolute zero tolerance for anyone who can't "hack" it and dispenses of them quickly. O'Keeffe was up to the test and served with honor. I like how he recounts how hard it was for him to adjust to civilian life back in Ireland. My own experience after leaving the British Army was similar.

He takes us from the Legion to his life as a private contractor in Iraq and then Haiti. In Iraq he was involved in a massive insurgent attack on a convoy he was escorting. He was the sole survivor and through his words you can feel his struggle to reconcile his feelings about being left alive while all his comrades died. Fantastic stuff.

O'Keefe saw more carnage than any young man has a right too and he has my full respect as he volunteered time after time. An exceptional man.

I enjoyed the book despite finding it a little sluggish here and there. Still, that takes nothing away from this man's life and the experiences he had.

Capt. Jack
5,0 van 5 sterren Celtic Warrier
22 augustus 2016 - Gepubliceerd op Amazon.com
Indeling: Kindle-editieGeverifieerde aankoop
This is a surprisingly well written and enjoyable book. My surprise was that it is so much more than a collection of war stories (sea stories to Marines). There is a lot of depth as the author examines his own emotions and motivations, as well as good background on the the conflicts he was involved in. I have been reading history lately and found some of those books enjoyable but a little tedious. Not this book! I really hated to put it down. Padraig is apparently quite a guy and someone you would want guarding your flank. I wish him well and safe travels and may the devil know he's dead 10 minutes after he's in heaven.
Meer lezen
Vertaal recensie in het Nederlands