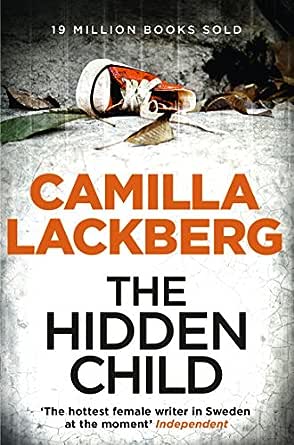 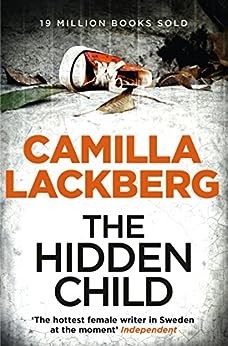 One of those mysteries that ruin a vacation. Take it to the beach and your eyes will be so locked on its pages, you'll never even know there's an ocean in front of you.

Eerie. Lackberg will keep you guessing.

Eerie. Lackberg will keep you guessing.

If Camilla keeps producing mysteries as richly textured and downright breathtaking as her latest, who knows? Maybe, one day, we might be identifying Agatha Christie as the British Camilla Lackberg.' --Maureen Corrigan"

One of those mysteries that ruin a vacation. Take it to the beach and your eyes will be so locked on its pages, you ll never even know there s an ocean in front of you. "

Eerie. Lackberg will keep you guessing. "

If Camilla keeps producing mysteries as richly textured and downright breathtaking as her latest, who knows? Maybe, one day, we might be identifying Agatha Christie as the British Camilla Lackberg. --Maureen Corrigan"

In this official TV Summer Book Club pick, worldwide bestseller Camilla Lackberg weaves together another brilliant contemporary psychological thriller with the chilling struggle of a young woman facing the darkest chapter of Europe's past…

Crime writer Erica Falck is shocked to discover an old Nazi medal among her late mother's belongings. Inspired to dig deep into her past, she visits a retired history teacher for answers. Two days later, he’s dead.

Detective Patrik Hedström is on paternity leave. But his wife’s enquiries appear to have set off a chain of murders and he’s finding it hard to keep out of the investigation.

A terrible secret from the darkest days of World War II is coming to light – and their families’ histories are right at the heart of it.

Kindle Customer
5,0 van 5 sterren insights into white supremacists - and a great murder mystery
16 februari 2017 - Gepubliceerd op Amazon.com
Geverifieerde aankoop
I really enjoyed this book. It is does jump back and forth between the past and present - for those of you who do not like that type of writing beware
In this novel Erica is trying to learn about her mother's past. She discovers diaries and a nazi medal wrapped in a baby's dress. She takes the medal to a neighbor who studies old nazi memorabilia. That neighbor is later found murdered
I learned a lot about how WWII impacted Sweden and the people who lived there. I learned a lot about the white supremacist ideology - which is still very much alive and thriving in todays society. So if you are not interested in that period of time you would not like this book. However, if you want some insights into the mentality of what is happening in our world today - you will enjoy it.
Plus - it is a really good murder story :)
Meer lezen
2 mensen vonden dit nuttig
Vertaal recensie in het Nederlands

Sandy Nichols
5,0 van 5 sterren Could Not Put the Book Down!
19 januari 2017 - Gepubliceerd op Amazon.com
Geverifieerde aankoop
I had to learn the secret of Erica's mother. Erica was an author whose husband Patrick was a policeman on paternity leave, caring for their one-year-old daughter so that Erica could resume her writing career. Following her mother's death, Patrick and Erica moved into Erica's mother's house. In the attic, Erica discovered some of her mother's diaries and a baby dress with dried blood on it wrapped around a Nazi medal. A murder victim was discovered in this small town in Sweden who was a childhood friend of Erica's mother, and the mystery began. Very well written and easy to follow. Highly recommend it.
Meer lezen
2 mensen vonden dit nuttig
Vertaal recensie in het Nederlands

AntKathy
4,0 van 5 sterren Best read in print, and not on a Kindle.
24 augustus 2014 - Gepubliceerd op Amazon.com
Geverifieerde aankoop
I did not realize that Camilla Lackberg's novel "The Hidden Child" is part of a mystery series. That being said, the book is definitely readable as a stand alone story.

Erica is a writer who has spent the previous year staying at home with her young daughter, Maja. It is now husband Patrik's turn to take a four month leave from his position in the local police department to care for Maja while Erica returns to her writing career.

While rummaging around in a storage area, Erica uncovers several diaries that belonged to her deceased mother when she was a young teen. In addition, she finds a baby dress, splattered with blood stains, wrapped around a Nazi medal. Although Erica has a sister, Anna, neither know anything about this dress, or why their mother would be in possession of a Nazi medal, as the family lives in Sweden, which was neutral during WWII.

In the meantime, Patrik makes a rather mediocre caretaker for daughter Maja, taking her along on police business when a murder occurs in their town of Fjallbacka. Soon, both Erica and Patrik are involved in solving the murder, when a second murder and later, a suicide take place, all involving childhood friends of Elsy, Erica's mother, who are mentioned in Elsy's diaries, but were unknown to Erica once Elsy reached adulthood and became a mother.

It takes quite a bit of digging on the part of the local police department, Patrik, Erica and Kjell, a journalist with a vested interest in the deaths, to uncover the ties between Elsy's friends, the Nazi medal, a Norwegian Resistance fighter and even a Neo-Nazi organization led by one of the group of friends from WWII.

There is a rather large cast of characters in the book, but it is relatively easy to keep them straight. Unlike other recently published books written by a Scandinavian author like Lackberg, the names are generally more commonplace to American readers, and aren't of similar spellings. These characters are all inter-related by family, marriage, job or friendship, and each play a role in covering up or uncovering the truth behind the deaths of Elsy's three friends.

The story is also compounded by the arrival and departure of Olav, the Norwegian who escapes German-occupied Norway via Elsy's father's fishing boat in the last year of the war. While a prominent figure in the diaries, none of Elsy's friends seem to know what happened to Olav after he leaves Sweden for Norway at war's end. Nor can Erica, Patrik or Kjell locate any records or history of him in either country.

Eventually, Erica, Kjell and Patrik, along with the help of the police department, unravel all the ties to the cover-up of the friendships, deaths and Olav's disappearance. The twist at the end almost serves to justify the decades of silence the wartime friends have kept.

My only complaint about the book has to do with the Kindle edition. The writer makes frequent changes of scene, which would normally be marked by a page break in a printed edition of the story, but are not obvious in the Kindle edition. As one reads the story, suddenly the author is on to another subject, and without the delineation between scenes, it takes awhile to figure out that a shift in the story has taken place, and to piece together the changes in the story. This is a book that is better read in print than on a Kindle.
Meer lezen
2 mensen vonden dit nuttig
Vertaal recensie in het Nederlands

L. Capo
4,0 van 5 sterren Another Good One for Camilla Lackberg
20 september 2014 - Gepubliceerd op Amazon.com
Geverifieerde aankoop
At first thought The Hidden Child was a little slow but halfway through I couldn't put it down. Main character is Erica Falck, a writer of real life mysteries, and her husband, a detective. All assorted main characters pretty much stay with each book, this one added a new detective, Paula. The Hidden Child is a modern day murder mixed with a mystery surrounding Erica's mother, Elsie. Erica finds her mothers diaries and during her investigation for her book, starts looking into her mothers early life and realizes she was a completely different person when she was young than the cold, distant mother Erica and her sister grew up with. This leads her to do more investigating of her mom which uncovers the fact that the person who was murdered was one of Elsie's group of childhood friends. The story goes back and forth between present day and the time of Erica's mom's teenage years during World War II, but the chapters are marked as such making it easy to follow. I have enjoyed the series and I liked The Hidden Child. I am hoping for the next one in the series, The Drowning, to come to ebooks.
Meer lezen
Vertaal recensie in het Nederlands

Dancer7
3,0 van 5 sterren Irritating protagonist, but an interesting enough read
3 februari 2017 - Gepubliceerd op Amazon.com
Geverifieerde aankoop
This was my first Camilla Lackberg book, and while I enjoyed it for the most part, I found one of the central characters quite irritating. It's Hedstrom's wife, Erica, who's the primary protagonist in this novel, in search of information about her deceased mother. Fine. Lots of us get into the hunt for information on lost ancestors, but Erica seems so completely oblivious to everything else that her behavior borders on the self-indulgent. Really, what kind of person badgers an elderly woman with Alzheimer's? Aside from that, it was an enjoyable read and I may pick up another in the Patrik Hedstrom series if I've nothing else on hand; but if his wife is as annoying in my next read as she was in this one, it'll probably be my last.
Meer lezen
Vertaal recensie in het Nederlands
Ga naar Amazon.com om alle 523 recensies te bekijken 4,3 van 5 sterren
Terug naar boven
Over ons
Verkoop bij ons
We helpen je graag
© 1996-2020, Amazon.com, Inc. en dochterondernemingen