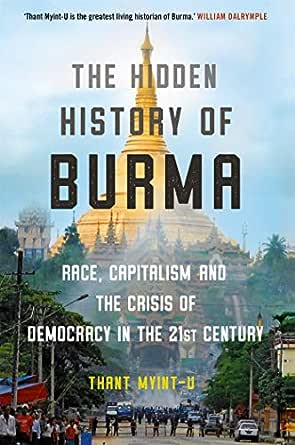 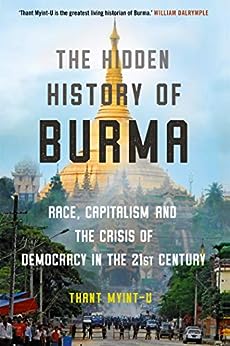 The Hidden History of Burma: Race, Capitalism, and the Crisis of Democracy in the 21st Century (English Edition) Kindle-editie

As historian, former diplomat, and presidential advisor, Thant Myint-U saw the cracks forming. In this insider's diagnosis of a country at a breaking point, he dissects how a singularly predatory economic system, fast-rising inequality, disintegrating state institutions, the impact of new social media, the rise of China next door, climate change and deep-seated feelings around race, religion and national identity all came together to challenge the incipient democracy. Interracial violence soared and a horrific exodus of hundreds of thousands of Rohingya refugees fixed international attention. Thant Myint-U explains how and why this happened, and details an unsettling prognosis for the future.

Burma is today a fragile stage for nearly all the world's problems. Are democracy and an economy that genuinely serves all its people possible in Burma? In clear and urgent prose, Thant Myint-U explores this question - a concern not just for the Burmese but for the rest of the world - warning of the possible collapse of this nation of 55 million while suggesting a fresh agenda for change.

empcee
5,0 van 5 sterren If you are going to read one book on Burma, read this one....
23 december 2019 - Gepubliceerd op Amazon.com
Geverifieerde aankoop
In the span of a few years, the story of Burma has gone from an admired fairy-tale-come-true to that of a fascist, genocidal outcast, home to one of the most reprehensible mass crimes in 100 years, in the form of the 2016-2017 Rohingya crisis. As Thant Myint-U’s prescient new book about Burma tells us, there could never be a linear history of a triumph of either good or evil in a place so complex, a place with a history that so palpably bears the wounds of abject isolation from global currents as well as from predatory exploitation at the hands of dictators and their regional counterparts. The stories of Burmese people’s lives captured in A Hidden History are poignant, absorbing and relevant to worldwide trends of inequality, “othering,” and the crises of modern democracy and capitalism. Perhaps the author’s greatest contribution is his pressing call for hard questions to be asked about how to characterize the past(s), how to navigate the present and – mostly importantly – how to imagine a future country and world that looks beyond some combination of race, religion and identity as singularly uncontested manifestos that lead only to a politics of exclusion and inequality.
Meer lezen
4 mensen vonden dit nuttig
Vertaal recensie in het Nederlands

H.
5,0 van 5 sterren Must-read book to better understand the whirlwind journey of Myanmar in the past decade
28 december 2019 - Gepubliceerd op Amazon.com
Geverifieerde aankoop
What happened when the 'local' (the generals, the activists, the academics, the businessmen) and the 'international' (the diplomats, the experts, the samaritans, and the global capitalists) suddenly came together to negotiate and deliver goals as elusive and intractable as democracy, development, modernity, and peace to a country like Myanmar whose history and complex realities have usually been, both domestically and aboard, reduced to narratives of 'good versus evil' and 'us versus them'? To me, this book comes across as an honest attempt to answer this question from the perspective of a person, who belongs to both the 'local' and the 'international' but perhaps does not fully identify with either. The book takes the reader through the author's intellectual, personal, and political journey in Myanmar in the past decade - in doing so, it paints a vivid picture of politics of hope, politics of cynicism, and politics of opportunism taking place in the same country at the same time. Only time will tell which ultimately wins out but the book suggests that the writing is on the wall.

Highly recommend this book to anyone who is interested in Myanmar, especially to the current generation of Myanmar youth asking themselves the question of what they can do for the country.
Meer lezen
3 mensen vonden dit nuttig
Vertaal recensie in het Nederlands

Jesse Moe
5,0 van 5 sterren So fundamental for the future of Burma
28 december 2019 - Gepubliceerd op Amazon.com
Geverifieerde aankoop
It is a well relevant and well-timed book. I was born and grew up there and was a political activist for the democracy movement for three decades but failed to understand the fundamentals of the Union and people who made it. This book gives new insights on why past and present governments of Burma, as well as all players, miss the root causes of the Country’s crises. Consequently, the efforts were unsuccessful.
The Author has contributed to the County’s transition. He offers a different approach from much of state holders and players inside and outside Burma. The book gives us insights into how mixed races, geographic politics, and social traditions and believes system exist. It advises that oversimplifying the process and labeling won’t get anywhere.
He wrote the book as a historian, a former diplomat, a new generation who has an aspiration about Burma raises again with dignity. It is well engaged.
Meer lezen
2 mensen vonden dit nuttig
Vertaal recensie in het Nederlands

Charles Petrie
5,0 van 5 sterren A remarkable, balanced and sensitive presentation of Burma's recent history
27 december 2019 - Gepubliceerd op Amazon.com
Geverifieerde aankoop
A remarkable book that presents the past, present and future challenges confronting Myanmar/Burma with courage and honesty. The author is able to do so in a clear and balanced way, while also making it a very pleasant read. The author provides insights into why the fairy tale that was meant to be Burma did not happen. But I was particularly struck by the concern shown in the book for those who are, and have been, the most vulnerable in Myanmar. He places today’s violence and injustice in its unique historical context.
Meer lezen
3 mensen vonden dit nuttig
Vertaal recensie in het Nederlands

John Crawford
5,0 van 5 sterren Must read
19 december 2019 - Gepubliceerd op Amazon.com
Geverifieerde aankoop
I visited Burma in 1988 and 2018. I wish this book existed prior to my most recent visit. I have read his other books by this author, but this is by far his best work. Anyone interested in modern day Burma must read this book.
Meer lezen
2 mensen vonden dit nuttig
Vertaal recensie in het Nederlands
Ga naar Amazon.com om alle 15 recensies te bekijken 5,0 van 5 sterren
Terug naar boven
Over ons
Verkoop bij ons
We helpen je graag
© 1996-2020, Amazon.com, Inc. en dochterondernemingen