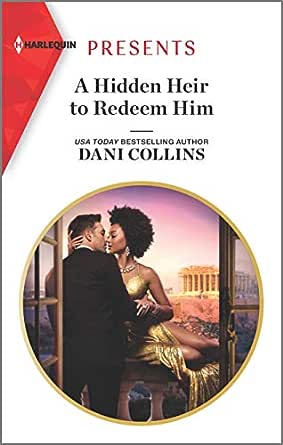 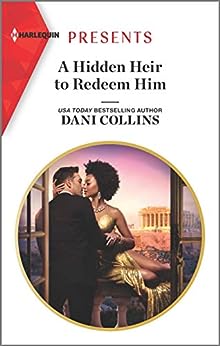 When Canadian Dani Collins found romance novels in high school she wondered how one trained for such an awesome job. She wrote for over two decades without publishing, but remained inspired by the romance message that if you hang in there you'll find a happy ending. In May of 2012, Harlequin Presents bought her manuscript in a two-book deal. She's since published more than thirty books with them and is definitely living happily ever after. --Deze tekst verwijst naar de mass_market editie.
click to open popover

Kindle Customer
4,0 van 5 sterren Nice quick read
2 mei 2020 - Gepubliceerd op Amazon.com
Geverifieerde aankoop
This was a good book. I like this author. The h was good but at times she was scary and insecure, she was strong when dealing with the H. The H had trust issues due to his childhood, his mother was a piece of work. He had major issues with his half brother. Looking forward to his half brother’s story. Sometimes it would drag. Overall good book.
Meer lezen
Vertaal recensie in het Nederlands

nps rates book
3,0 van 5 sterren Ok
16 juni 2020 - Gepubliceerd op Amazon.com
Geverifieerde aankoop
It was an ok story. This is my first time reading this author, and I'm not sure that I will read her again particularly
in the form of her sequel with the brother's story. I found the characters, especially the H to be immature.
Meer lezen
Vertaal recensie in het Nederlands

TRICIA HALL
5,0 van 5 sterren Wonderful!!!
3 mei 2020 - Gepubliceerd op Amazon.com
Geverifieerde aankoop
I know I have read a good book when it pulls you in at the beginning and leaves you with a smile at the end. I really enjoyed this story.
Meer lezen
Vertaal recensie in het Nederlands

Kim
4,0 van 5 sterren Flawed characters with all-consuming passion
1 mei 2020 - Gepubliceerd op Amazon.com
When I first found out Dani Collins was writing a book/series about two brothers who didn’t get along with each other I was excited. I wanted to know why two brothers hated each other so much. The Harlequin Presents line isn’t a line I normally read however, I read an excerpt from A Hidden Heir to Redeem Him and knew with certainty I HAD to read the book.

Valentino “Val” Cascale and Javiero Rodriguez were both born into luxury and broken homes. Sharing the same father, the two were only born two days apart. Val, the oldest, was the result of an affair between Nikolai “Niko” Mylonas and fashion model Evelina Cascale. Javiero was the product of Niko’s marriage to Paloma Rodriguez. The brothers were each raised full time by their mothers with frequent visits to their father’s Greek island. Niko made sure that he treated each son and mother the same. Meaning that Val and Javiero went to the same boarding school and their mothers received the same allowance. But just because Niko treated the boys the same didn’t mean those around them or society did.

By pure serendipity, Val and Kiara O’Neill met three years ago in Venice. The two shared a night together full of passion and wonder, never to see each other again. Weeks later, Kiara not only realizes she’s pregnant but that Val is married and off on his honeymoon. As a starving artist, living hand to mouth Kiara jumps at the opportunity offered to her by Niko. Niko will take care of Kiara and her child as long as she moves to his Greek island with him and doesn’t tell Val he has a child. To give her child every opportunity she didn’t have and to continue creating art, Kiara agrees. She knows Niko is estranged from his sons but doesn’t know why. She also knows Niko is dying and that the secret of her having Val’s child will not remain a secret forever.

Val is a man who seems to like to live up the title of being born illegitimate. He's cold, cruel, and borders on possibly being emotionally abusive. He lashes out before anyone can lash out at him. For at least 75% of the book, probably more, I didn’t like him. Kiara was a woman I wasn't very fond of. She did things the way Niko wanted her to and didn’t seem to stand up for herself. It wasn't until probably halfway into the book that I gave her the benefit of the doubt and saw things through her eyes. Though initially, I wasn’t fond of either character, I kept reading the book because I was mesmerized and knew Dani was going to show Val in a different light and redeem him in my eyes. She completely did by revealing his heartbreaking past which could be a trigger for some.

The title of the book, A Hidden Heir to Redeem Him, is perfect. Kiara and her daughter healed and redeemed Val by simply loving him for the man behind the mask the world sees. Val, in turn, gave Kiara the family and love she has always wanted and needed.

A Hidden Heir to Redeem Him shows the different dynamics of love. From its purity to its all-consuming passion. Dani has written a story you can’t put down, where she evokes feelings and emotions you aren’t expecting. I went from not truly caring about Val and Kiara to hoping and praying they found a way to be together, not because of their daughter, but for themselves.

A Hidden Heir to Redeem Him and Beauty and Her One-Night Baby featuring Javiero take place at the same time. Because of this, Javiero has already been introduced and some of his character has been revealed. I’m really looking forward to reading his story, and seeing if my thoughts about him are correct. I have a feeling I’m going to proclaim Dani as a being a master at what she does.

“A life without hope is a very dark place.”

Dbld
3,0 van 5 sterren Totally on the fence on this one
24 mei 2020 - Gepubliceerd op Amazon.com
Didn't love it, the hero was weird, I didn't get why he married another woman, he called it s@xless, but was it? Just didn't like the whole book but didn't hate it either. The heroine to me wasn't a doormat but she was romantic? Is that the right word. She probably believed in Cinderella and fairy tales and happily ever after. Her Prince was Val and she loved him. Or at least the idea of him and she wanted it all. The passion, the romance, the mystery of him and no matter how much she knew was reality, it was the ever after that made her susceptible to him. She was a wannabe Cinderella and he was her Prince Charming, warts and all. I don't judge her for the pact with Nico, after all Val had married someone else, She had no loyalty to him. She thought he paid her for their night together and it was humiliating but she actually didn't let that defeat her. She chose a path that would benefit her daughter and make her life better than the one she had lived. And her life was indeed sad. I just didn't disrespect her for her decisions, now Val? He was weird. I still didn't love him, but he wasn't as bad as some HP heroes are.I don't know why I bought or read this but it was okay. I won't read it again and I definitely wouldn't recommend it but I have read worse HP's. Or maybe I am just getting used to sub par HP romances because that is all they seem to be putting out lately. Yet I still keep reading them, praying for a happily ever after, and a hero that actually is just that, a hero. 😥
Meer lezen
Vertaal recensie in het Nederlands
Ga naar Amazon.com om alle 13 recensies te bekijken 4,0 van 5 sterren
Ontdek het beste van shopping en entertainment
Gratis en snelle bezorging van miljoenen producten, onbeperkt streamen van exclusieve series, films en meer
> Ontdek Prime
Terug naar boven
Over ons
Verkoop bij ons
Amazon-betaalmethoden
We helpen je graag
© 1996-2020, Amazon.com, Inc. en dochterondernemingen