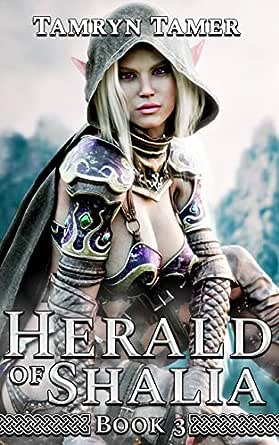 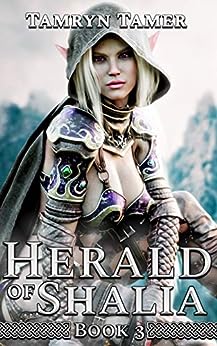 Sebastian Frost’s territory had grown massively as did his reputation.

He was the Herald of Shalia that married a demoness, invited hundreds of Arachne to live in his territory, and married a princess of Zira all in the same week. All while securing peace and trade agreements with the two largest countries on the continent.

His reputation even crossed the ocean and when Cassia, the Prophet of Shalia, heard about Frost, she hopped on the first ship back home to meet the herald.

Kindle Customer
5,0 van 5 sterren Love it
6 december 2019
Indeling: Kindle-editieGeverifieerde aankoop
I need more of this in my life. The comedic timing is just so good :3.
Oh and ofcourse the sex is good 2

Keith Huntington
5,0 van 5 sterren Frost meets his new mom-in-law
27 november 2019 - Gepubliceerd op Amazon.com
Indeling: Kindle-editieGeverifieerde aankoop
You think you've heard mother-in-law problems? Frost's impending M-I-L is an OP priestess feared by millions, who has single-handedly murdered tens of thousands of innocents, and absolutely dotes on her only daughter... the one that Frost is going to be marrying soon.

Oh, did I mention that the M-I-L looks almost identical to her daughter? How about that dear M-I-L shows a distinct carnal interest in Frost? What could possibly go wrong, right?

Meanwhile... Frost's OTHER wives demand more of his time, and the rest of the village women, demihumans, and monsters are showing a keen interest in joining the wife club.

The accidental introduction of Ayohyous (I.O.U's) as a currency is hilarious. We get to see a bit more of Slade and Hestia -- and THAT cat is pretty much out of the bag now, much to Slade's eternal grief. I laughed out loud quite a few times while reading the book, it's a lot of fun.

One warning for the OCD crowd: the book just got released, and as such hasn't had a second proofing/editing pass. I hope that another pass happens quickly, as this one feels like it got pushed out maybe a week too soon. (Yeah, probably because all the fans kept demanding that it get released, editing be damned. Catch-22 for the poor author.) Anyway, there are a lot of typos and grammatical glitches, starting right on page 1. I counted (and reported) 99 issues in my first reading pass. These things didn't take me out of the story, but if you're OCD about that sort of thing you might want to wait a week or so for an update to happen.

David
5,0 van 5 sterren Great character development and world building
27 november 2019 - Gepubliceerd op Amazon.com
Indeling: Kindle-editieGeverifieerde aankoop
The third book in the series does a good job of continuing the story by building on events of the previous books. We get some insight into the past, as well.

The whole series (so far) has done a good job of providing character development and growth. This book expands our knowledge of the world in learning about other dieties, as well as other continents and countries.

On a smaller scale, Frost struggles with governing his territory with events from the last book making things even more interesting than they were before. There's a good balance between the big picture world building and the smaller scale (Frost's territory) as well.

There are a few typos here and there, but I did not find them to detract from the story at all. It's the gift that keeps on giving in that we learn more about things like the wedding ceremony. It's the little things like this that make the series so enjoyable.
Meer lezen
Een iemand vond dit nuttig
Vertaal recensie in het Nederlands

Brianczi
5,0 van 5 sterren can't get enough of these characters!
6 december 2019 - Gepubliceerd op Amazon.com
Indeling: Kindle-editieGeverifieerde aankoop
Honestly, as engaging as the main plot is, it's almost secondary compared to the characters themselves. This series is what happens when a talented writer who knows their characters is set loose. I couldn't put this down and finished in a little over a day. At this point I'm going to be picking up anything this author produces because I have yet to be disappointed. If you're looking for a well told story with fully realized characters, and humor that is clever and on point, then pick up book 1 and buckle up cause you're in for a great ride!
Meer lezen
Een iemand vond dit nuttig
Vertaal recensie in het Nederlands

Kindle Customer
5,0 van 5 sterren Loving this series.
1 december 2019 - Gepubliceerd op Amazon.com
Indeling: Kindle-editieGeverifieerde aankoop
The humour continues to be on point, the two Arachne Queens are just so damn adorable with their fascination with "ayoyous". The story is also progressing very nicely as the characters are all just as lovable as they were in the previous books. This series is definitely one of my favourites to have come out this year.
Meer lezen
Een iemand vond dit nuttig
Vertaal recensie in het Nederlands

Kindle Customer
5,0 van 5 sterren Don't f$&k with Frost!
13 december 2019 - Gepubliceerd op Amazon.com
Indeling: Kindle-editieGeverifieerde aankoop
What I liked about this book is that the main character is the most accepting of others no matter who they are he See's past the scales, fur, large teeth, etc. To see the beauty within and he also tries to not overlook the loves has himself. I also love the new addition of Cassia and how Frost proved her innocence favorite chapter. And, I especially liked how he finally got Madam Gardenia ( at long last) I can't wait for the next book
Meer lezen
Vertaal recensie in het Nederlands
Ga naar Amazon.com om alle 81 recensies te bekijken 4,6 van 5 sterren
Terug naar boven
Over ons
Verkoop bij ons
We helpen je graag
© 1996-2020, Amazon.com, Inc. en dochterondernemingen