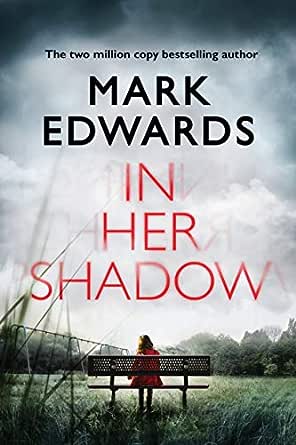 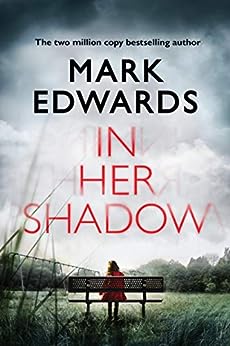 In Her Shadow (English Edition) Kindle-editie

For four years Jessica has never doubted that her sister Isabel’s death was an accident. But when Jessica’s young daughter seems to know long-forgotten details about her aunt’s past, Jessica can’t shake the feeling that there’s a more sinister truth behind the tragedy.

As Jessica unearths disturbing revelations about her sister, and about the people she loved and trusted most, it becomes clear Isabel’s life was less than perfect and that Jessica’s might also be at risk.

Did someone murder Isabel? Are they now after Jessica and her family? The key seems to lie in the hands of a child. Can Isabel reveal the truth from beyond the grave, or is the answer closer to home?

In Her Shadow is a gripping tale of family secrets, lies and obsession from the two million copy bestselling author Mark Edwards.

Amazon Customer
2,0 van 5 sterren Is this really Mark Edwards
18 oktober 2018 - Gepubliceerd op Amazon.com
Geverifieerde aankoop
As I started reading this book I began to think it was written by a different Mark Edwards. So far I have struggled to maintain enough interest to finish this book. It is not a physiological thriller but a rather preposterous account of the paranormal. If I wanted to read that kind of book I would have bought a Stephen King. I think Mark needs to bring back Louise Voss to get him back on track. Will someone who has read this book let me know if it is worth the time to finish. And to Mark if you are going to change genres just say so upfront.
Meer lezen
13 mensen vonden dit nuttig
Vertaal recensie in het Nederlands

NZLisaM
5,0 van 5 sterren Yet another winner from Mark Edwards!
8 oktober 2018 - Gepubliceerd op Amazon.com
Geverifieerde aankoop
Five years ago Jessica’s sister, Isabel, tragically fell from her second storey balcony. Now, Jessica’s daughter, Olivia, who was born after her aunt died, is exhibiting some worrying behaviour. The 4 year old is obsessed with death, particularly Isabel’s. Not only that, she insists that ‘Aunt Izzy’ told her she was ‘pushed’ by a bad man. Jessica tells herself there must be a rational explanation, but her daughter knows things about Izzy she couldn’t possibly know, and Jessica has believed in the existence of ghosts, even since she and Isabel were young, and their childhood home was invade by an evil spirit.

First rate psychological suspense! The perfect Halloween read, equipped with a creepy, unsettling storyline, that appears to be paranormal, but you know by the end there’s going to be a rational explanation. This is my fifth book by this author, and the fourth one I have rated 5 stars. His books have so many layers, peel back one, and you’ve barely scratched the surface. I figured someone had to be manipulating Olivia, feeding her information, but I was completely stumped by who, why, and how they were doing it. Instead of making more sense as the book progressed, things got even more confusing and disconcerting, and it wasn’t until the last page that I had all the answers. Well, except for one part that was left open to your own interpretation, depending on how you choose to read into it.

I really liked Jessica, an average wife and mother, just trying to do the best for her family. She’s got a lot on her plate – grieving the loss of her sister, as well as trying to figure out who, or what, is trying to harm her daughter, and whether or not there’s more to Isabel’s death than meets the eye. The bulk of the story takes place in the present (2018) narrated by Jessica, with flashback chapters (2012-2013) in Isabel’s POV.

An entertaining, nail-biting novel. I will be waiting with baited breath to see what Mark Edwards comes up with next.

M D Tuch
4,0 van 5 sterren good book, but not great
22 december 2018 - Gepubliceerd op Amazon.com
Geverifieerde aankoop
I have read other Mark Edwards books and would have to consider myself a fan. This book is another fine thriller, who-done-it mystery with a sprinkling of the paranormal, and the short chapters are indicative of the overall fast pace of the story.
For some reason the book seemed lacking in intensity to me. It is hard to put my finger on, but the constant drug use and drinking was a put off of sorts. The sex therapy business and modeling business seemed like a veneer instead of a real thing. All of this cast a pallor over the main characters for me, and the added *me too inferences seemed forced and for me, unwanted. I get plenty of this from the news.
The first half of the book was great. Suspenseful, I was propelled along, absorbed by the mystery, engaged by the creepiness of the child and the frustration of her mother. I thought I had the protagonist figured out about half-way through, but alas, I was totally wrong. In the second half, I found that there were plenty of characters to despise, so I had a free-for-all in choosing my most unpleasant person. But the author did lose much of the pace and anticipation in this part of the story. I did like very much the way Edwards tied everything up at the end, leaving just a sliver of doubt for the reader to ponder.
This wasn’t his best work, but I will continue to read his books for sure.
Meer lezen
6 mensen vonden dit nuttig
Vertaal recensie in het Nederlands

Gabi Rosetti
5,0 van 5 sterren 'The key seems to lie in the hands of a child.'
20 oktober 2018 - Gepubliceerd op Amazon.com
Geverifieerde aankoop
This book was told from two points of view: Izzy's in 2012-2013 when she was alive and Jessica's in the present day (there were a few sequences told from another point of view, but no spoilers here). The stories were brilliantly interwoven into a brilliant psychological thriller by Mark Edwards that will have you wondering 'is this real or am I going crazy?'!

This book grabbed my attention in the beginning and held me hostage until the The last page was read. The plot and subplots were well thought out and well presented. The characters came alive and jumped off the pages. I love a book that I just cannot put down once I have started them and this was one of those. This was a real edge-of-your-seat page-turner and I was up all night reading it. Just when you think you had it figured out, something else would happen and you would have to start second-guessing yourself. You will change your mind several times about who the guilty culprit(s) might be. I was often breathless with anticipation and felt chills running up and down my spine. There were more twists and turns than a roller coaster ride and the big reveal(s) will blow your mind! The ending was perfect and it gave me goosebumps.

AfterThought: This was not my first book by Mr. Edwards — and it certainly will not be my last. If you want to read a great psychological thriller, get your copy today!
Meer lezen
4 mensen vonden dit nuttig
Vertaal recensie in het Nederlands

Mae Clair
3,0 van 5 sterren Not What I Expected
15 oktober 2018 - Gepubliceerd op Amazon.com
Geverifieerde aankoop
I'm a Mark Edwards fan. I love his work and he is an auto-buy for me, but this book fell short of what I hoped for. I'm not even sure how to write a review. Based on the blurb, it wasn't at all what I expected. I found myself irritated with most of the characters, including the central character. I enjoy convoluted plots but this one stretched the boundary. As much as I love Mr. Edwards, I struggled to finish this. Maybe that was because I couldn't connect with any of the characters. Or it could have been the shifting plot from "is it a paranormal?" to "it isn't a paranormal."

The writing, as always was superb. There were moments of brilliance, but overall, I would equate this to an "okay read." Not every writer hits it out of the ballpark every time, but that won't stop me from keeping Mark Edwards on my auto-buy list. Even if I didn't personally like this story, I'm sure there are plenty of other readers who will find it engaging. For me, this one missed the mark.
Meer lezen
3 mensen vonden dit nuttig
Vertaal recensie in het Nederlands
Ga naar Amazon.com om alle 167 recensies te bekijken 4,0 van 5 sterren
Terug naar boven
Over ons
Verkoop bij ons
We helpen je graag
© 1996-2020, Amazon.com, Inc. en dochterondernemingen