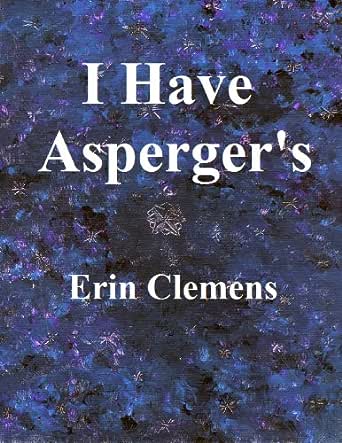 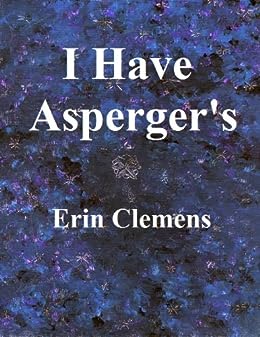 I Have Asperger's (English Edition) Kindle-editie

My name is Erin Clemens. I'm 24 years old, and I want to help others understand what my life is like living with Asperger's Syndrome. My hope is that people can learn from what I have been through, and apply it to what may help someone they know on the spectrum. To me, autism isn't a death sentence. It's just a different lifestyle. The views expressed are my own.
click to open popover

For anyone who has Asperger's or knows someone with this condition, Ms. Clemens' book may very well be a life-saver. It may also save interpersonal relationships that had been previously deteriorating through lack of understanding.

If the author sounds narcissistic and self-absorbed it is because that is how AS manifests itself to people who lack knowledge of Autism Spectrum Disorders. According to Wikipedia, one can see that it did not appear in diagnostic manuals until the late 1990s:

"Asperger syndrome (AS), an autism spectrum disorder (ASD), is a relatively new diagnosis in the field of autism. [1] It was named in honor of Hans Asperger (1906–80), an Austrian psychiatrist and pediatrician. An English psychiatrist, Lorna Wing, popularized the term "Asperger's syndrome" in a 1981 publication; the first book in English on Asperger syndrome was written by Uta Frith in 1991 and the condition was subsequently recognized in formal diagnostic manuals later in the 1990s."

Ms. Clemens demonstrates what her life is like in various situations; she illustrates what causes her "meltdowns" and "tantrums " and explains the difference between the two. She strives, on a daily basis, to be understood; in fact, that is probably her fondest desire. She is normal, but a "different" kind of normal. Her life is anything but easy, yet despite all the trials and tribulations, she manages to hone her coping skills and unselfishly passes them on to others through speaking engagements in the hope of helping others with ASD. She also generously provides links to various groups that provide information and assistance to those who seek such help.

This book takes the reader on daily excursions into the author's life, and it also gives hope for the future of those afflicted with this disorder.

Many thanks to you, Ms. Clemens, and best of luck with your endeavors.

Cherei Mc
5,0 van 5 sterren Must read for anyone wanting to know more about autism.
16 augustus 2015 - Gepubliceerd op Amazon.com
Geverifieerde aankoop
What an amazing, insightful book! I have friends with children who are autistic. Just reading this taught me so much about the different path that they were given as parents. It's something that we really don't discuss other than to acknowledge that life has been much different than they thought it would be. The author presents quite a few tips for everyone to learn from what she feels, sees and experiences and more importantly.. copes!

This book is a must read for any parent, grandparent, family or friends who want to understand what it's like to spend just a few hours from an autistic teenager's perspective. Goodness know.. every teen thinks they are alone and the only one experiencing certain experiences. When in fact.. they are just growing up.

Risahath
4,0 van 5 sterren Recommended.
11 april 2016 - Gepubliceerd op Amazon.com
Geverifieerde aankoop
I did not know what to expect, but it looked interesting. This is not a book written ABOUT somebody with Asperger's; it is written BY someone with Asperger's. Good read to "put the shoe on the other foot." We go through life seeing and making judgments about people with these types of syndromes and diseases and most of the time never try to stop and see things through their eyes. This book is a gathering of blog posts and notes written by Erin Clemens about her life and how she functions with Asperger's on a day to day basis. She also talks about how to help those with this syndrome, because unless you have a loved one with Asperger's, most people really don't know what to do if there is a problem or how to act. Good read if you are just curious.....great read if you know someone.

I was interesting and insightful to see things from their perspective.
Meer lezen
Een iemand vond dit nuttig
Vertaal recensie in het Nederlands

Gretchen Leary
4,0 van 5 sterren Definitely worth a read!
7 juli 2015 - Gepubliceerd op Amazon.com
Geverifieerde aankoop
I also have Aspergers Syndrome and I can relate to quite a bit in this journal style book. It's definitely worth a read. I know what the "black and white" thinking", sensory issues, and social issues feel like in life and you get to see the author grow throughout the book. It definitely offers insight for those who are looking to better understand young adults on the Autism Spectrum even though we are all different and unique. Thank-you for sharing your story Erin!
Meer lezen
8 mensen vonden dit nuttig
Vertaal recensie in het Nederlands

TRose
5,0 van 5 sterren I am so amazed by this book and the young woman who wrote it!
4 augustus 2019 - Gepubliceerd op Amazon.com
Geverifieerde aankoop
Reading Ms. Clemen's book has taught me a great deal about the life of an Aspie. Her ability to share everyday struggles, as well as gifts really touched my heart. This is a very well written book that I found difficult to put down. I knew nothing about Asperger's so my curiosity caused me to download it. I am so glad I did. Ms. Clemens is an inspiration! Much appreciation for sharing this story with us.
Meer lezen
Vertaal recensie in het Nederlands
Ga naar Amazon.com om alle 34 recensies te bekijken 4,5 van 5 sterren
Terug naar boven
Over ons
Verkoop bij ons
We helpen je graag
© 1996-2020, Amazon.com, Inc. en dochterondernemingen