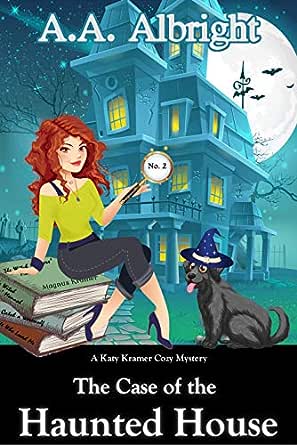 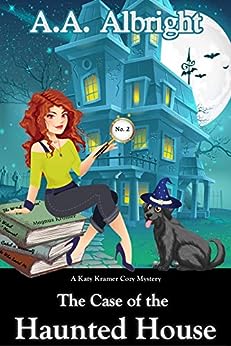 When Katy’s latest two cases involve haunted houses and badly-behaving mirrors, she’s feeling less like a witch hunter and more like a ghost hunter. Together with Ned, Hamish and Cleo, she sets to work on solving the mysteries.

But as the bodies rack up, it’s clear that neither of these cases is simple. The ghost of Jim McGinty insists his death was a murder, so Katy and her friends need to find the killer before they strike again. It would all be so much easier if Jim would just tell them who killed him, but no one ever said that ghosts were sensible.

In a week filled with stubborn spirits, angry werewolves, unusual musicals and sexy vampires, Katy’s beginning to feel a little overwhelmed. To top it all off, she must continue to hide the truth about herself. Because if she tells her new friends she’s a witch hunter, she could lose them forever.

There’s someone who does know the truth, though – the irritating Wayfarer agent, Cullen Keats. He might be the last person Katy wants as a partner, but this time around, he could be exactly what she needs …

Josie Contessa
5,0 van 5 sterren Mirror, mirror
5 september 2019 - Gepubliceerd op Amazon.com
Geverifieerde aankoop
Another amazing read. I just couldn't put it down until I finished. I adore the characters and the spill over from the other series. Plenty of twists and action kept me turning the pages. So much more to unfold and I can't wait for the next installment.
Meer lezen
Vertaal recensie in het Nederlands

Kindle Customer
5,0 van 5 sterren The Case of the Haunted House
20 september 2019 - Gepubliceerd op Amazon.com
Geverifieerde aankoop
Loved it. This new series set in the same world as the other two series is just great. I loved every minute reading this book and I know you will too.
Meer lezen
Vertaal recensie in het Nederlands

Krystyna
5,0 van 5 sterren Terrific - talk about dysfunctional relationships
18 oktober 2019 - Gepubliceerd op Amazon.com
A wonderful read. A plot that grows from a simple ghost banishment request to a murderous society and opens them up to the possibility that another evil society is gaining strength and power.
When the widow of a izzard comes asking for help to banish the ghost of her murdered husband they don't expect to have to deal with another murder and a society that has hunted werewolves and weredogs. Add in portals, an evil plan that will leave no survivors and a heartless mastermind. Then there is Ned's sister who tries to make herself best friends with Katy and Hamish. Why does her new acquaintance think that there is more seething below the surface after attending a party as her plus one. To top it all a new door has appeared in the office and she finds out exactly how different she is to the other hunters. But will this be enough when she and her friends are fighting for their lives?

penrph
4,0 van 5 sterren another great read
9 september 2019 - Gepubliceerd op Amazon.com
Fast paced read and great character development. Was really nice to see that Katy and Hamish are finally honest with each other. The one thing i didn't like is Katy's romantic interest in both Cullen and Jay- i really hate these love triangles and hope beyond hope that the author doesn't mess this up romantically the way she did with the Wanda Wayfair series which made me stop reading them. I don't understand why anyone would think that multiple love interests add anything other than frustration to the story.
Meer lezen
Vertaal recensie in het Nederlands

Gwen G
5,0 van 5 sterren Another excellent story!
16 september 2019 - Gepubliceerd op Amazon.com
Katy Kramer is a witch hunter turned private eye and undercover Wayfarer. To top all that off she's lying to everyone about who and what she is. Life is complicated for her. Thankfully, she has some really great friends who have her back. The mystery of why a man is haunting his wife leads to all manner of hijinks! A delightful mystery that will keep you engrossed throughout!
Meer lezen
Vertaal recensie in het Nederlands
Ga naar Amazon.com om alle 15 recensies te bekijken 4,8 van 5 sterren
Terug naar boven
Over ons
Verkoop bij ons
We helpen je graag
© 1996-2020, Amazon.com, Inc. en dochterondernemingen