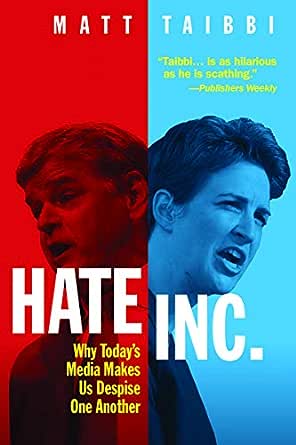 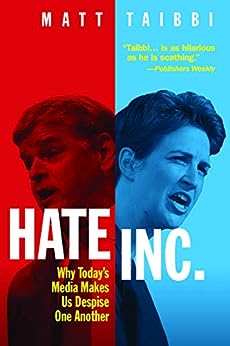 Hate Inc.: Why Today’s Media Makes Us Despise One Another (English Edition) Kindle-editie

Part tirade, part confessional from the celebrated Rolling Stone journalist, Hate Inc. reveals that what most people think of as "the news" is, in fact, a twisted wing of the entertainment business

In this characteristically turbocharged new book, celebrated Rolling Stone journalist Matt Taibbi provides an insider's guide to the variety of ways today's mainstream media tells us lies. Part tirade, part confessional, it reveals that what most people think of as "the news" is, in fact, a twisted wing of the entertainment business.

In the Internet age, the press have mastered the art of monetizing anger, paranoia, and distrust. Taibbi, who has spent much of his career covering elections in which this kind of manipulative activity is most egregious, provides a rich taxonomic survey of American political journalism's dirty tricks.

Heading into a 2020 election season that promises to be a Great Giza Pyramid Complex of invective and digital ugliness, Hate Inc. will be an invaluable antidote to the hidden poisons dished up by those we rely on to tell us what is happening in the world.

Graham H. Seibert
5,0 van 5 sterren A welcome book, a mea culpa and a trenchant analysis of the madness in today's media circus
8 oktober 2019 - Gepubliceerd op Amazon.com
Geverifieerde aankoop
Matt Taibbi's introduction is an endearing confession. He tells us what he was paid to do – write poignant political putdowns. He came to my attention when a former girlfriend sent an article including the sentence "The world's most powerful investment bank is a great vampire squid wrapped around the face of humanity, relentlessly jamming its blood funnel into anything that smells like money." Liberal or conservative (I'm the latter) you have to applaud this wonderful characterization of Goldman Sachs. Which, by the way, is neither liberal nor conservative, but twists its blood funnel whichever way the prevailing political winds are blowing.

Many astute reporters have noted that we are becoming more vitriolic by the year. See Douglas Murray's The Madness of Crowds: Gender, Race and Identity. We don't know about Murray's politics, but he is a conservative in that he takes on the madness that he identifies in his title. One has to feel that the overlapping waves of political correctness that radiate from the huge splash of the 1960s are finally cresting. We have reached peak absurdity. There is nobody who has more sharply honed the tools to write about it than Taibbi. This is a welcome book.

He writes "I despair at the blame-a-thon of modern political media and wonder all the time if I didn’t help construct this new attitude with the flamboyant insults I put in print for years. Worse, today’s media debate has left its sense of humor behind, and we now argue even minor issues as life-or-death matters, despite not even knowing each other. People who would certainly engage in courteous chats at their kids’ birthday parties freely trade horrific threats on Twitter. It’s insane."

Taibbi paints a picture of a halcyon era in which the news was mostly unbiased. He writes "Whereas the task was once to report the facts as honestly as we could – down the middle of the 'fairway' of acceptable thought..."

He does not go into who defined "acceptable thought." The fact is that there were few Gentile press barons between the eras of William Randolph Hearst and Rupert Murdoch. Print media were dominated by men such as Eugene Meyer of the Washington Post, the Sulzbergers and Ochs of the New York Times, the Pritzkers of Chicago. Broadcast media were dominated by William Paley and Robert Sarnoff.

For Taibbi to claim that Fox News invented the silo is a little bit disingenuous. The men who dominated the press had their own silo, one that did not include the bulk of their audience – Gentiles. Rupert Murdoch made a lot of money by figuring that out. Taibbi says that Roger Ailes claimed that his target demographic was "white men between 55 and dead." It was broader than that.

Another dimension that Taibbi does not mention is television entertainment. Fox was equally successful in figuring out what this broad demographic wanted in the way of humor. They did not all want to have their minds expanded by programs such as "All in the Family" or "Star Trek."

As an amusing side note, white people who are not Gentiles, the ones who dominate American academia, finance and media, can be defined by a single word. That word does not appear anywhere in this book. Coincidence?

The most valuable material is in the last few chapters. Government officials always have a narrative that they want to push. Reporters have a professional duty to be skeptical. Yet, they are not. They suppress their curiosity in order to maintain access.

Taibbi devote a lot of text to two major fiascoes. The first was the second Iraq war, the WMD question. The intelligence community wanted a war, and they had a perfect villain in Saddam Hussein. They spent years putting together the case for taking him down. Saddam was not a nice man, but there was no need for war. Beating the drums for war was the entire Bush apparatus – the usual heavies, Cheney, Rumsfeld, Poindexter and the like – but also a great many liberal and neocon outfits. Taibbi is tough with all of them.

In the end, the Republicans were the strongest proponents of the Iraq war. Therefore it is easier to get the press to be honest with itself on the subject. Another advantage is that the British Chilcot Report does a thorough and honest job of analyzing how the British press was co-opted into supporting this ill-advised war.

The second, Russiagate, on the other hand, is a Democrat operation. Democrats dominate the press. It appears that they dominate the intelligence agencies as well – the "Deep State", although Taibbi doesn't call it that. It will be harder to do a postmortem on Russiagate because the information sources for such an investigation would be too highly compromised.

Taibbi's book itself will be an excellent start. While he has no love for Republicans or for Trump, he does seem to like the truth. May the truth win out.

Among the other things to like about Matt Taibbi is that he is a straight white man. His Amazon portrait photograph shows him holding his son. How amazing! He is one of the few who is writing about the current state of affairs in the world who has a stake in its future. He has to care how his son will grow up and whether he has grandchildren. A look around will indicate that relatively few of the world's leaders share these concerns. A majority in Europe are childless. I hope Taibbi starts a trend.

Taibbi's arch sense of humor expresses itself even then his chapter titles.

1. The Beauty Contest: Press Coverage of the 2016 Election...
2. The Ten Rules of Hate
3. The Church of Averageness
4. The High Priests of Averageness, on the Campaign Trail...
5. More Priests: The Pollsters
6. The Invisible Primary: or, How We Decide Ele...
7. How the News Media Stole From Pro Wrestling
8. How Reading the News is Like Smoking
9. Scare Tactics: All the Folk Devils Are Here
10. The Media's Great Factual Loophole
11. The Class Taboo
12. How We Turned the News Into Sports
13. Turn it Off
14. The Scarlet Letter Club
15. Why Russiagate is This Generation's WMD
Appendix 1: Why Rachel Maddow is on the Coy...
Appendix 2: An Interview with Noam Chomsky
Acknowledgments

That's enough of a brief review for the moment. I will add chapter reviews as I have time to write them. Without a doubt, a five-star effort.

Kindle Customer
1,0 van 5 sterren Tiabbi slipping
23 oktober 2019 - Gepubliceerd op Amazon.com
Geverifieerde aankoop
I have been a huge fan of Matt Taibbi and have purchased all of his books. There is much of interest in this book, but it does not offset his attempts to make a false equivalency between Sean Hannity and Rachel Maddow. Anyone who watches these commentators can see that they are totally different in tone, intent, and commentary. I wish I hadn't purchased it.

Given the cover, I guess I only have myself to blame.
Meer lezen
54 mensen vonden dit nuttig
Vertaal recensie in het Nederlands

Debora
5,0 van 5 sterren 💡Essential Reading If You Consume "News" (or other media) In This Day & Age
11 oktober 2019 - Gepubliceerd op Amazon.com
Geverifieerde aankoop
Everyone who consumes news or media should read this. I have enjoyed the writings of this author during the past year, his observations come from a bi partisan ability to see the big picture and drill down into the real truths and motivations behind lofty declarations made in the name of "news and reporting". Don't fall for the con jobs out there, at least arm yourselves with knowledge. Matt tells it like it is. He has been there, done that. Excellent book!

Kindle Customer
5,0 van 5 sterren The most challenging book I've read in ages
10 november 2019 - Gepubliceerd op Amazon.com
Geverifieerde aankoop
I have been a fan and avid follower of Matt Taibbi since he joined Rolling Stone, and I've voraciously devoured everything of his I could get my hands on. But this book (and "Strangers in Their Own Land") have brought me to a crisis of conscience of sorts.

Over a lifetime, our society conditions us to think in polar terms such that some of us can't pick up a piece of red or blue candy without the unconscious reflex of thinking "us" or "them" based on its color and their political party. Our ideas, our sources, our media are pure, accurate, and good, but anyone and anything from the other side is not.

Taibbi's bold and devoted updating of "Manufacturing Consent" calls into question this social conditioning and the media's role in creating a political climate so fractured that writers have to embark on an ethnographic expedition to their own country to learn how to navigate the empathy divide (as in "Strangers in Their Own Land," which while Taibbi might deride the necessity of such a sojourn, the result was nevertheless revelatory to me). At times, I've cheered Taibbi's central thesis--that the media must be impartial and never serve as a form of tribal blinders--and at others, I've been brought to an existential crisis of sorts. Part of me worries I have been contributing to this culture war by having deeply held beliefs and that I ought to seek communion with my fellow man, while another part of me feels that there are limits to tolerance that should not be crossed, not least of which there being literal Nazis on our streets.

I don't know what the path forward is for us in this country, but I do know this political and media divide cannot stand. I also know this book is an essential and vital read that will challenge your views, whichever side of the divide you're on.
Meer lezen
21 mensen vonden dit nuttig
Vertaal recensie in het Nederlands

Peter Soderman
5,0 van 5 sterren Long awaited and worth the wait
21 oktober 2019 - Gepubliceerd op Amazon.com
Geverifieerde aankoop
I preordered this book months ago, and wasn't disappointed after reading it. Matt is as hard on himself as he is on other members of his profession as he examines several incidents and political campaigns in great detail. You get all the W's from a true insider with keen insight into the industry. I hope the book finds an audience because it doesn't pull any punches, nor does it spare any segment of our current political spectrum.

If you're wondering why "we can't all get along," and how we have intentionally been manipulated into that position, the answers are here. In my opinion, this is the clearest window into the journalism business since "Manufacturing Consent."
Meer lezen
18 mensen vonden dit nuttig
Vertaal recensie in het Nederlands
Ga naar Amazon.com om alle 32 recensies te bekijken 4,0 van 5 sterren
Terug naar boven
Over ons
Verkoop bij ons
We helpen je graag
© 1996-2020, Amazon.com, Inc. en dochterondernemingen