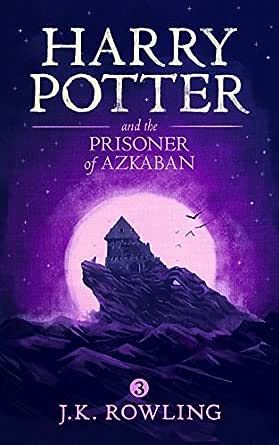 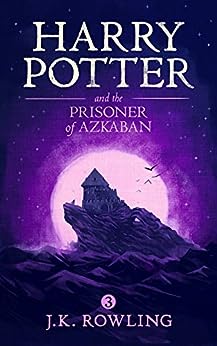 Harry Potter and the Prisoner of Azkaban (English Edition) Kindle-editie

'Welcome to the Knight Bus, emergency transport for the stranded witch or wizard. Just stick out your wand hand, step on board and we can take you anywhere you want to go.'

When the Knight Bus crashes through the darkness and screeches to a halt in front of him, it's the start of another far from ordinary year at Hogwarts for Harry Potter. Sirius Black, escaped mass-murderer and follower of Lord Voldemort, is on the run - and they say he is coming after Harry. In his first ever Divination class, Professor Trelawney sees an omen of death in Harry's tea leaves... But perhaps most terrifying of all are the Dementors patrolling the school grounds, with their soul-sucking kiss...

Lee
5,0 van 5 sterren My favorite book in the series! (SPOILER ALERT!!!)
15 januari 2019 - Gepubliceerd op Amazon.com
Geverifieerde aankoop
I love all of the Harry Potter novels, but this one is by far my favorite! From the very first time I read it as a 7 year old (when the book first came out in 1999) I loved the change of pace from the other books in the series - for once, Lord Voldemort is not the main antagonist, and instead it's Sirius Black - or at least so we think! The ending contains one of the biggest plot twists in the entire series, and it's ultimately less about fighting evil and more about finding family and belonging.

This purchase was actually a replacement - as my first edition copy had been read so many times by me, my sister, and my parents, that the binding was pretty much destroyed and the pages quite stained (because obviously putting the book away during lunchtime is not an option for 7-12 year old Potterheads)
Meer lezen
8 mensen vonden dit nuttig
Vertaal recensie in het Nederlands

Kati
5,0 van 5 sterren Spoilers!
17 augustus 2016 - Gepubliceerd op Amazon.com
Geverifieerde aankoop
“I solemnly sear that I am up to no good.” (ch. 10 pg. 192)
Harry Potter and the Prisoner of Azkaban is the third book in the Harry Potter series. It follows Harry and his friends through the excitement that is their third year at Hogwarts. In the start of the book, we find Harry doing his homework by flashlight under his bed sheets- as any proof of his time at that wizarding school is forbidden by the Drusley’s. It’s Harry’s birthday and for the first time in his life, he receives birthday cards and presents from his friends Hermione, Ron, and Hagrid. During a visit from Aunt Marge, Vernon and Harry make a deal, if he can keep Hogwarts a secret, Vernon will sign Harry’s permission slip to visit Hogsmead on the weekends. Unfortunately that goes out the window when Marge insults Harry’s family and he accidentally inflates her, whoops. The Knight Bus then picks up Harry after he leaves the house suddenly, but not after seeing something peculiar in the bushes…
The main conflict of this novel is the fact that escaped prisoner Sirius Black is on the loose and dangerous. Dementors have made Hogwarts their home for the year and even made a little pit stop on the Hogwarts Express to make sure Sirius Black wasn’t aboard. While they didn’t find the prisoner on the train, they did find Harry, because of the sorrow and death he has already witnessed the dementors were drawn to him. The mysterious person (who we find out to be the new Defense Against the Dark Arts teacher) is at the ready to produce a Patronus charm, which is used to ward of dementors with a happy memory.
The school year starts and the dementors are not respecting the boundaries that Dumbledore has put into place. They even disrupt a Quidditch match and send Harry flying off of his broom and his Nimbus 2000 into the Whomping Willow. Harry get used to his new classes and the frequent disappearance and reappearance of Hermione as she seems to be taking more class than any average witch or wizard can handle. Third year is when students start taking Divination and it’s not Harry’s favorite subject to say the least. Professor Trelawney often tells Harry he is in grave danger after finding the Grim in his cup, and she becomes overcome with a prophecy when they are alone in the classroom. "It will happen tonight. The Dark Lord lies alone and friendless, abandoned by his followers. His servant has been chained these twelve years. Tonight, before midnight, the servant will break free and set out to rejoin his master. The Dark Lord will rise again with his servant's aid, greater and more terrible than ever before. Tonight... before midnight... the servant... will set out... to rejoin... his master..." (ch.16 pg.324)
The story concludes with Harry, Ron and Hermione using Hermione’s Time Turner to not only save Hagrid’s friend Buckbeak, but also Harry’s innocent godfather Sirius Black, who has spent the last 12 years in Azkaban for a crime he did not commit. With the help of their new Defense Against the Dark Arts teacher (who is also a werewolf!) Remus Lupin; Harry finds out more about his parents past and how their secret keeper and friend Peter Pettigrew betrayed them.
This is easily my favorite Harry Potter book out of the seven. I’d give it ten out of five stars if I could. It introduced me to my favorite character of the series (Remus Lupin) and helped to continue the story of Harry Potter and helped Harry find out more about his parents before they died. He also was reconnected with his godfather and James’ best friend Sirius Black.
“Mischief Managed” (Ch, 10 pg, 194)
Meer lezen
17 mensen vonden dit nuttig
Vertaal recensie in het Nederlands

Amazon Customer
5,0 van 5 sterren Harry Potter is Life
27 januari 2019 - Gepubliceerd op Amazon.com
Geverifieerde aankoop
I purchased this copy for my little brother. I love the Harry Potter books, and I wanted to pass the magic on to him. I am quite the Potterhead and buy this for any 10-100 year old that has a birthday. I have already started reading the first one to my daughter, who happens to be named after Molly Weasley. Personally, Harry Potter and the Goblet of Fire (#4) is my favorite, but definitely start with #1 if you are just beginning. Obviously I recommend this to everyone.
Meer lezen
3 mensen vonden dit nuttig
Vertaal recensie in het Nederlands

jt
5,0 van 5 sterren right after i finished it, ran out & got The Goblet of Fire
9 mei 2015 - Gepubliceerd op Amazon.com
Geverifieerde aankoop
I LOVE THIS BOOK -- not as much as 1 & 2, but it endeared itself to me, right from the beginning, when Rowling's lovable humour came back into my life :):) I luv her ~ she's my new hero. So outlandishly, unapologetically creative, and with enough 'edge' to keep you curious about what can POSSIBLY happen next to Harry & his adorable tribe of Wizards.
Thank you, JK Rowling, for offering me a new world to escape into. . . over . . . & over . . . & over . . .

(right after i finished it, ran out & got the Goblet & started -- I'm not even done watching the movie for this one!)
Meer lezen