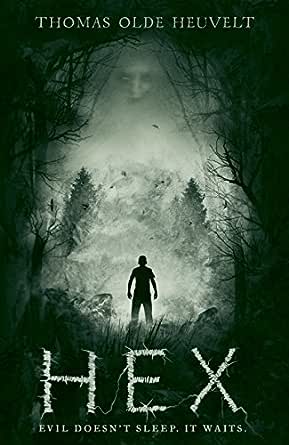 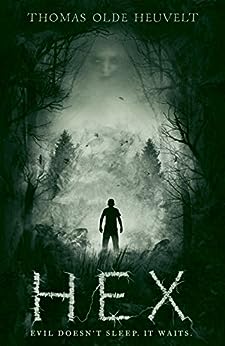 "HEX is creepy and gripping and original, sure to be one of the top horror novels of 2016." --George R.R. Martin

"Thomas is a great writer, the next genre superstar." --Paul Cornell

"[A] touch of strangeness, of alienness, avoiding sub-Stephen King clichés. [Olde Heuvelt] has written five novels already, and publishers should be lining up to translate them." --The Wall Street Journal

"HEX is reminiscent of vintage Stephen King, and I can think of no higher praise. Chilling, moving and . . . profound." --John Connolly

"HEX is a thoughtful horror story, and one that is all the more chilling for its uncompromising view of humanity. . . . I found the story and its ending uncompromising and inevitable." --Robin Hobb

"HEX takes the horror/thriller genre to a whole new level. It's deeply unsettling, wholly original, brilliantly written and contains scenes that will haunt you for a long time to come. I dare you to read it." --Sarah Lotz

"Thomas Olde Heuvelt's HEX is a treat for all fans of dark fiction . . . a modern spin on the witch's curse story that forces us to take a closer look at ourselves. Who is really evil after all? It's may not be who you think. This is just the beginning and I can't wait to read his next one." --Ann VanderMeer

"Hidden tensions and human weakness trigger a witch-hunt that boils over into persecution, scapegoating and a shocking denouement. A powerfully spooky piece of writing." --Financial Times

"Equal parts Stephen King and The Cabin in the Woods, Thomas Olde Heuvelt's novel is a pop page-turner with an intriguingly weird ambience . . . a funny, surprising and eerie novel." --SFX Magazine

"Olde Heuvelt offers up a truly terrifying parable about mankind's depravity and the depths of evil of which we are capable. The story is not merely unsettling, it is horrifying" -Kirkus Reviews

[S]imilarities to early Stephen King . . . Spielbergian in the way Olde Heuvelt shows supernatural goings-on in the midst of everyday life . . . It's a fabulous, unforgettable conceit and Olde Heuvelt makes the most of it." --The Guardian

"A great read for fans of The Blair Witch Project or The Crucible. " --Booklist

"[O]ne of the most original, clever, and terrifying books to be published in the 21st century". --New York Journal of Books

"An entertaining read with a chilling concept. Not for the faint hearted." --Brave New Words

"Truly absorbing and keeps you locked into the horrifying events as they unfold." --Fantasy Book Review

The greats of fiction Stephen King and George R. R. Martin lead the fanfare for HEX, so be assured that Thomas Olde Heuvelt's debut English novel is both terrifying and unputdownable in equal measure.

Whoever is born here, is doomed to stay until death. Whoever comes to stay, never leaves.

Welcome to Black Spring, the seemingly picturesque Hudson Valley town haunted by the Black Rock Witch, a seventeenth-century woman whose eyes and mouth are sewn shut. Blind and silenced, she walks the streets and enters homes at will. She stands next to children's beds for nights on end. So accustomed to her have the townsfolk become that they often forget she's there. Or what a threat she poses. Because if the stitches are ever cut open, the story goes, the whole town will die.

The curse must not be allowed to spread. The elders of Black Spring have used high-tech surveillance to quarantine the town. Frustrated with being kept in lockdown, the town's teenagers decide to break the strict regulations and go viral with the haunting. But, in so doing, they send the town spiraling into a dark nightmare.

harmonista222
2,0 van 5 sterren Horror That Tries Way, WAY Too Hard
27 december 2017 - Gepubliceerd op Amazon.com
Geverifieerde aankoop
First, I applaud any author with the talent and discipline to publish a blockbuster novel (in two languages, nonetheless). Second, I very much wanted to like this book. It's rooted in traditional folk horror -- a genre I feel is sadly under-represented in today's literary landscape. It's also a clear nod to both the legendary W.W. Jacobs short "The Monkey's Paw," and Stephen King's "Pet Sematary" -- which is, itself, a masterful tribute to that earlier tale. In fairness, too, the core "HEX" concept and associated visuals are pretty darn terrifying. So let me try to articulate why this story didn't work for me at all:

1. Too Much Exposition
Celebrated ghost story writer M.R. James once noted that "nicely managed crescendo" is essential to any horror tale. "Into a calm environment," he said, "let the ominous thing put out its head, unobtrusively at first and then more insistently, until it holds the stage.” In "HEX," the "ominous thing" is with us from page one -- and then for numerous pages, before we get any clarification that explains what's going on. Unfortunately, once that exposition arrives, it floods the story so it almost feels we're listening to a rambling documentary about the ominous thing. Which makes the thing feel a LOT less ominous.

2. Technology Too Clever for Its Own Good
I get it. This is a modern witch tale, and technology is actually intrinsic to the dynamic that (eventually) makes everything fall apart. But that technology takes such center stage that it practically becomes a main character -- again, greatly distracting from the slow burn of the "ominous thing." Worse, the presence of that same technology leads to plot holes larger than the Lincoln Tunnel. The author asks us to believe that this New York hamlet is utterly disconnected from the outside world -- then force-feeds us every manner of modern media, making us realize (repeatedly) why this dynamic would be impossible in any first world country today.

3. Weirdly (Over-)Similar Narrative Structure
This is perhaps the most troubling aspect of "HEX." Flip to Part 2 of "HEX," which begins with Chapter 23. Simultaneously, flip to Part 2 of 1983's "Pet Sematary" (which begins, "It's probably wrong to believe there can be any limit to the horror which the human mind can experience."). Read the succeeding chapters side-by-side. I'm all for creating a tribute to a modern master (and elements of "HEX" are *definitely* based on "Pet Sematary" throughout). But these latter chapters are a little too close for comfort. Entire phrases, cadences, narrative beats, even word choices have been used to craft this newer novel's framework. As a lifelong horror reader, I felt insulted that someone would think this could actually go unnoticed. I also felt confused by the Stephen King review on the cover: "Totally, brilliantly original." Wait, are you kidding???

4. Off-the-Rails Ending
So much for the "ominous thing." The ending of "HEX" -- which I understand was re-written from the original Dutch, for some reason -- is the horror movie equivalent of hurling everything at the camera simultaneously. Please don't tell me over and over "this situation is totally terrifying" -- SHOW me scenes that unnerve me. Don't crank the chaos meter to 14+ -- take a cue from "The Monkey's Paw," which proves understated scares are the most horrifying kind. The ending of this book was over-the-top confusing, inconsistent, frenzied, silly and awful.

ChibiNeko
5,0 van 5 sterren A slow, atmospheric thriller
30 december 2016 - Gepubliceerd op Amazon.com
Indeling: Kindle-editieGeverifieerde aankoop
This was one of the more surprising books I've read this year, in that its probably one of the most solid horror novels of 2016 yet it hasn't received that much fanfare. I wouldn't have heard of this if I hadn't seen it in a friend's Facebook feed and it looks like much of its readership comes more from word of mouth than an intense media marketing campaign. That's good in some ways but bad in others, as this very much deserves more readers than it has received.

What impressed me so much about this book was how much it relied on human evil as opposed to supernatural evil. There's a definite supernatural presence, so much so that the townsfolk have learned how to adapt their lives to the constant presence of the Black Rock Witch, to the point where it actually ends up making some of the townspeople complacent. I will try not to elaborate too much at the risk of spoilers, but it's likely the adults' begrudging acceptance of "this is how it is" that causes the teenagers to start recording and even taunting the Black Rock Witch. It's natural for children to try to see how far they can bend or break the rules as a way of challenging authority and while they know that the witch is deadly, they've also grown up with the knowledge that not much (if anything) will happen as long as you don't touch her, listen to her words, or undo any of her bindings. That leaves a lot open to interpretation. Another thing that intrigued me is that the witch isn't entirely portrayed as this horrible evil thing. This I can't really spell out without spoilers, but I will say that Olde Heuvelt does try to show that life does not deal in absolutes and that actions can have an impact on outcomes.

I will warn people that this book is slow moving, so much so that the action doesn't really get started until the last fourth of the novel. You can see where things are going and there is tension, it just takes a while for the powder keg to explode here. This isn't entirely surprising since there has been a lot of movement towards books of this type, but I know that this won't be everyone's cup of tea. I suppose the best endorsement I can give this book is that I started listening to this on audiobook and ended up purchasing an e-book copy because I got so into the novel that the audiobook version just went too slowly for me.
Meer lezen
26 mensen vonden dit nuttig
Vertaal recensie in het Nederlands

Kawboy
4,0 van 5 sterren Well written and very creepy! Hard to put down.
26 maart 2018 - Gepubliceerd op Amazon.com
Indeling: Kindle-editieGeverifieerde aankoop
I really enjoyed this novel! It was the first I've read by this author, but I'll definitely be a return customer for more of his writings. I love the plot; a 350 yr old witch has a sleepy little town terrified of her (who wouldn't be based on the description of her - the stuff of children's nightmares). I found the character development to be very good, despite a lot of character movement throughout the story. The sociological aspect of the town's collective and individual mentalities with regard to the witch and the horrific "hex" she had over them was fascinating to me. Mr. Heuvelt considered every angle and was even able to weave a variety of strangely hilarious situations throughout the story. Honestly, I wasn't thrilled with the ending (Amercian version) and may need to reach out to a Dutch friend to see how that version was different. Finally, I am amazed and impressed with the Dutch author's meticulous grasp of the English language. Perhaps I can attribute some of that to the Dutch school system (apparently multilingual proficiency is the norm over there). However, the author goes well beyond basic mastery of the language and provides some beautifully artistic prose in this book. I would highly recommend to anyone who likes a good scare. Again, the ending went in a different direction than I wanted, but it was a very fun ride / read overall.
Meer lezen
9 mensen vonden dit nuttig
Vertaal recensie in het Nederlands

Melissa
2,0 van 5 sterren Boring
12 januari 2018 - Gepubliceerd op Amazon.com
Geverifieerde aankoop
Though I liked the initial idea, this book lacks originality. Too much was borrowed from The Blair Witch Project and Pet Sematary, especially the latter. Also I couldn't connect to the characters at all. The only one that was slightly interesting is the witch herself, but she literally does nothing. The ending puts the final nail in the coffin.
Meer lezen
9 mensen vonden dit nuttig
Vertaal recensie in het Nederlands
Ga naar Amazon.com om alle 348 recensies te bekijken 4,1 van 5 sterren
Terug naar boven
Over ons
Verkoop bij ons
We helpen je graag
© 1996-2020, Amazon.com, Inc. en dochterondernemingen