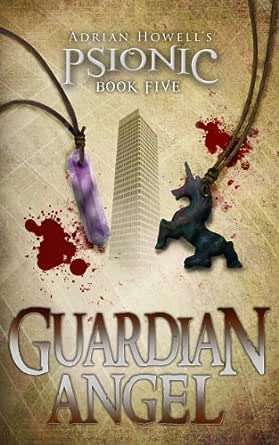 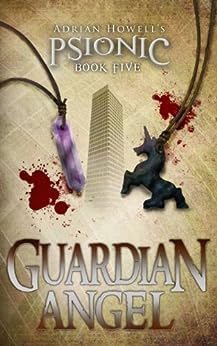 Adrian Howell carries a dark secret: one that could save the world from psionic domination. But this secret must be kept even from his allies. As the Angels make their final push to end their 700-year war with the Guardians and set their sights on the rest of humanity, Adrian's small band of freedom fighters must find its way through a maze of betrayal and deceit, and somehow restore the balance of power before it is too late. And yet, as the war approaches its tipping point, the greatest battle Adrian faces now is not one that is fought with psionics, but deep within the confines of his own scarred heart. For even in the unlikely event that he succeeds in his mission, the price of victory might not only be his life, but his very soul...

Guardian Angel is the fifth and final book of Adrian Howell's Psionic Pentalogy: a supernatural adventure series with psychic children, teens and adults, telekinesis, telepathy, and many twists and turns in a harsh urban fantasy world.

Linda
5,0 van 5 sterren The writing is great and I saw only one editing error throughout the ...
15 juni 2017 - Gepubliceerd op Amazon.com
Geverifieerde aankoop
I read a lot of ebooks. I usually begin with a free one. If the story intrigues me enough to purchase the next book, I will. I have always drawn the line at even considering paying more than $4.99 for each reaming book in a series. The Psionic Pentalogy was the exception to my rule. This series had me totally hooked with Wild-Born and by the time I was halfway through the third book, I purchased the last two. I have a lot of children and not a lot of money but this series saw me using my birthday money to buy what I wanted, which was the whole series. Read the first book. Get lost in the story. Become part of the resistance. It is a decision I am sure you will not regret. I will read this series again and maybe this time I won't hold my breath as much. The writing is great and I saw only one editing error throughout the whole five book series. It was so inconsequential that I don't even remember what it was. Much admiration to Adrian Howel (pen name) for his wonderful story. Even if it didn't have a happily ever after.
Meer lezen
Vertaal recensie in het Nederlands

David A. Dill
5,0 van 5 sterren The Final Installment in the Excellent Psionic Pentalogy and the Adventures of Adrian Howell
7 februari 2016 - Gepubliceerd op Amazon.com
Geverifieerde aankoop
Guardian Angel: Book five (PSIONIC Pentalogy #5) by Adrian Howell is an excellent series that got me hooked and I couldn't stop until I was finished. I read the final installment straight through. The war between the psionic factions, the God Slayers and now the Guardian Angels has heated up to the boiling point. Everyone is after Adrian and Adrian has his own personal mission. I thoroughly enjoyed the series and recommend it to everyone. I look forward to more books by this author. Once you start this pentalogy, be prepared to get involved as you won't want to put it down. If you want non stop action, this is the series for you. I personally would like to see another volume in this series.
Meer lezen
Vertaal recensie in het Nederlands

Susan L. Carrier
5,0 van 5 sterren OUTSTANDING PENTALOGY!!!
29 mei 2014 - Gepubliceerd op Amazon.com
Geverifieerde aankoop
This is the very strong ending of a very strong story. I cannot recall a seriesnof books that I have enjoyed more, and I have read many series in my life.

Indies publishing does not havebig publicity behind it so please let my enthusiasm for this series encourage you to buy and read...I recommend it absolutely to anyone with a tastes for a tight well written sci ti type story with heroic overtones and many unexpected twists and turns and an unexpected, but wholly satisfying ending.
Meer lezen
7 mensen vonden dit nuttig
Vertaal recensie in het Nederlands

Kindle Customer Paul
5,0 van 5 sterren Wow Adrian Howell
21 oktober 2015 - Gepubliceerd op Amazon.com
Geverifieerde aankoop
You pulled it off. These books are written by a master. Not a master controller, but . . . I don't know, maybe . . . I couldn't put down the series. Written with great detail - such so that it's easy to imagine the reader "ME" being there in the world of psionics and humans. The story, for me, never got boring. Characters were truly believable. Thank you Adrian, for having all the books ready to read one after another. I didn't want to have my patience tested. Perfect ending.
Meer lezen
3 mensen vonden dit nuttig
Vertaal recensie in het Nederlands