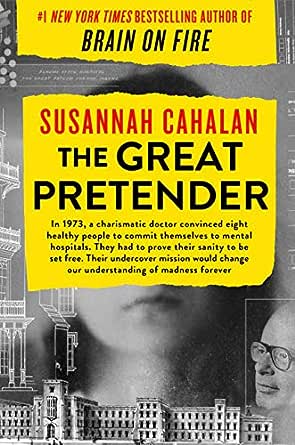 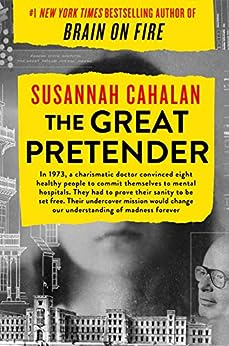 The Great Pretender: The Undercover Mission That Changed Our Understanding of Madness (English Edition) Kindle-editie

"One of America's most courageous young journalists" and the author of the #1 New York Times bestselling memoir Brain on Fire investigates the shocking mystery behind the dramatic experiment that revolutionized modern medicine (NPR).

Doctors have struggled for centuries to define insanity--how do you diagnose it, how do you treat it, how do you even know what it is? In search of an answer, in the 1970s a Stanford psychologist named David Rosenhan and seven other people--sane, healthy, well-adjusted members of society--went undercover into asylums around America to test the legitimacy of psychiatry's labels. Forced to remain inside until they'd "proven" themselves sane, all eight emerged with alarming diagnoses and even more troubling stories of their treatment. Rosenhan's watershed study broke open the field of psychiatry, closing down institutions and changing mental health diagnosis forever.

But, as Cahalan's explosive new research shows in this real-life detective story, very little in this saga is exactly as it seems. What really happened behind those closed asylum doors?
click to open popover

Travis Ann Sherman
5,0 van 5 sterren Ground breaking, and I never say that
17 augustus 2019 - Gepubliceerd op Amazon.com
Vine-klantenrecensie van gratis product( Wat is dit? )
I read through the first half of Cahalan's book with a bit of detachment. Her presenting story about her own misdiagnosis of schizophrenia (she had suffered a type of encephalitis which mimicked all the symptoms) made for very interesting reading, and segued naturally into her research on David Rosenhan's vital study, On Being Sane in Insane Places, a nine page article published in Science, January 1973, which helped to revolutionize thinking about the abuses of psychiatric hospitals. She recapped the history of psychology briefly and vividly, but as I read along, I wasn't finding a great deal I didn't already know. I knew about Nellie Bly going undercover in the horrors of the 1800s; I knew about lobotomies and shock treatments; I knew about the failure of psychoanalysis. Cahalan, putting the article in perspective, points out its importance at the time of publication. "By the late 1980s, a little over a decade after its publication, nearly 80 percent of all intro-to-psychology textbooks included Rosenhan's study." That's an impressively well known study, but still, all this took place over fifty years ago and the field is a swiftly changing one.

And then, halfway through her narrative, The Great Pretender makes a great turnaround, and we begin to wonder what the Pretender is pretending. I almost don't want to reveal the plot twist, so abrupt and vivid it is, even though the book is a carefully researched work of nonfiction. Cahalan is a trained reporter who really knows how to dig, and she knows how to tell a story too. Determined to discover the identities of Rosenhan's 'pseudopatients', the eight 'healthy people' who had themselves committed as test cases, she finally traced one by digging through the files of the deceased scientist. By this time she had a few questions about Rosenhan's account of his own stay. Certain small details in his notes didn't match up with his published article.

The more she digs, the more questions she has and the fewer answers. This was the article which helped to convince the world that psychiatry was incapable of accurate diagnosis. The creation of the DSM-3 was influenced by this study. Psychiatric hospitals closed down from lack of funding all over the country. And in the end, after rigorous research, chasing one dead end after another, she is left, as is the reader, with the certainty that Rosenhan just made it all up. Why not? It did his career a world of good.

Perhaps psychiatric hospitals were dismal warehouses where the chances of the sick making a recovery were slim. But she points out such a study could never take place today. No one would be admitted to a psychiatric hospital because they heard a few voices. Perhaps they'd be given a prescription. If they were violent, perhaps a jail sentence. Or they might just end up on the streets.
Meer lezen
71 mensen vonden dit nuttig
Vertaal recensie in het Nederlands

Ericka
1,0 van 5 sterren Boring...
10 november 2019 - Gepubliceerd op Amazon.com
Geverifieerde aankoop
This book is filled with a lot of tangential thought and loose associations. The author is constantly jumping between topics, often unrelated to Rosenhan’s study. I was unpleasantly surprised how little of the book actually discussed the study and experience of the 8 participants. By the time you think you know what she is talking about, she changes the subject. It is a regurgitation of nearly all of the developments in psychiatry from the beginning of time in a disjointed and non-linear fashion. I felt like I was stuck in a never-ending, one sided conversation with my nana that is filled with rabbit holes unrelated to the original story. Save yourself the time and google Rosenhan’s study and subsequent critiques.
Meer lezen
38 mensen vonden dit nuttig
Vertaal recensie in het Nederlands

Trudie Barreras
5,0 van 5 sterren Extremely informative, but also an enjoyable and engaging read
16 september 2019 - Gepubliceerd op Amazon.com
Vine-klantenrecensie van gratis product( Wat is dit? )
Author Susannah Cahalan uses her personal experience of an autoimmune brain inflammation which masqueraded as mental illness (previously recounted in her best-selling memoir “Brain on Fire”) to launch her powerful documentary “The Great Pretender”. Cahalan began by trying to develop an in depth study of the famous Rosenhan Study, published in Science Magazine in 1973 under the title “On Being Sane in Insane Places”. This study, widely cited in subsequent literature, purported to be a thoroughly documented and controlled experiment in which 8 “pseudopatients” voluntarily entered various mental health institutions, all presenting with the same purported symptoms, and then methodically chronicled their treatment and their efforts to be considered “sane enough” to be released. The net effect of the Rosenhan study was to challenge the entire foundation of psychiatric diagnosis and treatment, which to a very large extent resulted in the closure of most psychiatric facilities.

Although Cahalan’s initial intent was simply to locate and/or interview the pseudopatients and verify their experiences, it turned out that she was only able to accomplish this in three out of the eight cases, and as her investigation continued, it became more and more possible that in fact the study as originally presented had been falsified. The author makes it emphatically clear that her major objective is not to debunk Rosenhan’s work, but rather to emphasize that there is a great deal yet to learn about body-mind interactions. Although as we all know medical technology and pharmacology have brought astounding blessings in terms of intervening in the disease process, both physically and mentally, it is inappropriate to become dogmatic about any particular diagnosis or purported cure or treatment. Unfortunately, the endeavor of the fields of Psychology and Psychiatry to establish a sound “scientific” basis for their assertions appears to be exceptionally vulnerable to manipulation where “hard” data is unobtainable.