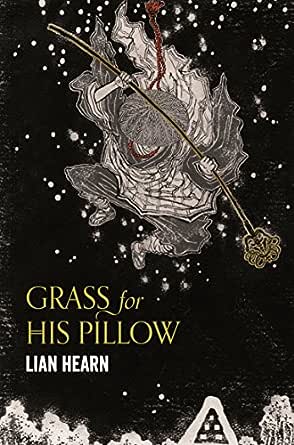 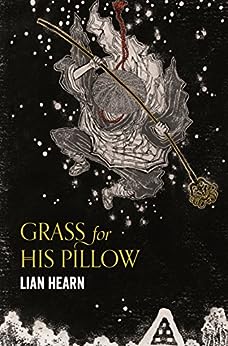 Grass for His Pillow is the second novel in Lian Hearn's astonishingly beautiful series inspired by feudal Japan, Tales of the Otori.

In the ancient Oriental lands of the Otori, amidst a time of violent war, famine and treacherous alliances, the fate of the young lovers Otori Takeo and Shirakawa Kaede hangs in the balance . . .

Takeo, heir to the great Otori clan, has pledged his life to the secret Tribe. His supernatural skills of virtual invisibility and acute hearing make him their most deadly assassin. But he must deny the solemn oath of vengeance he made, his adopted birthright of wealth, land and power – and his love for Kaede. If he does not devote himself entirely to the brutal ways of the Tribe, they will kill him. Whichever path he chooses, it will lead to hardship and sacrifice in the bitter winter of the high mountains, and test him to the limits of his being.

Kaede, heiress to vast lands, is now the valuable pawn of ruthless warlords. She must use her intelligence, beauty and cunning to assert her place in a world of all-powerful men – who must never suspect the dangerous secret she hides.

JMK Purple Flamingo
5,0 van 5 sterren Enjoyed book two
20 januari 2019 - Gepubliceerd op Amazon.com
Geverifieerde aankoop
The story and descriptions made you feel as if you were there. I do not live where it snows, so the descriptions of the coldness made me glad that I live in southern California. Looking forward to reading Book 3.
Meer lezen
Een iemand vond dit nuttig
Vertaal recensie in het Nederlands

Karissa Eckert
3,0 van 5 sterren Very much in the style of the first book; but I found myself getting bored.
28 april 2008 - Gepubliceerd op Amazon.com
Geverifieerde aankoop
This is the second book in the Tales of the Otori series by Lian Hearn. This book picks up where the first left off. Takeo leaves Kaede for training under the mysterious Tribe; whose supernatural abilities Takeo has inherited from his father. As his training concludes, and he is asked to take out certain missions, he must ask himself if his loyalties will lie with the Tribe or with the Otori? Kaede meanwhile is left on her own to return home and see what state her family is in. Kaede struggles to consolidate her power and claim the inheritance she was left in a world that is run by men.

This was a fitting second book for this series. It moved along at the steady, descriptive pace of the second book. Although for some reason I found myself getting bored while reading this book. The lush descriptions, while detailed, didn't bring the book to life in the way I hoped they would. I had a little trouble understanding some of the stupid decisions made by Kaede and Takeo along the way. Despite these misgivings, if you liked the first book you must read the second book. It is very much in the same style of the first book and continues the story of Kaede and Takeo. This book definitely builds to a climax preparing you for the war and conflict of the third novel.

sjg
5,0 van 5 sterren Superb - adventure, mystery & intrigue
15 februari 2018 - Gepubliceerd op Amazon.com
Geverifieerde aankoop
One of my favorite reads. The main character is beautifully portrayed in a historical Japanese venue. The writing is superlative and creates detailed scenes easily envisioned. Best of all, though this is part of a series of books, each stands well on it's own. Try a sample; I'm sure you'll want to read all of it.
Meer lezen
Een iemand vond dit nuttig
Vertaal recensie in het Nederlands

Super2019
5,0 van 5 sterren Review of unabridged audio version
4 februari 2004 - Gepubliceerd op Amazon.com
Geverifieerde aankoop
Rating System:
1 star = abysmal; some books deserve to be forgotten
2 star = poor; a total waste of time
3 star = good; worth the effort
4 star = very good; what writing should be
5 star = fantastic; must own it and share it with others
STORY: From back cover: "Takeo has now been claimed by the Tribe; held by them against his will, he is condemned to work as an assassin. Meanwhile, Shirakawa Kaede must try to unify the domain she has inherited, while fighting off would-be suitors and hoping that Takeo will return to her."
MY FEEDBACK:
1) You don't really need to read the first book to understand this story because the author does enough reflection and backstory to get a reader up to speed. BUT...it is so much better if you do read Across the Nightingale Floor first.
2) The characters of Takeo and Kaede are explored more and we as readers continue our bond and love for them. Kaede plays a much larger role in this book than the first.
3) This second/middle book doesn't seem to suffer from middle-book syndrome but continues with the same strength as the first. The first book resolved enough without having to read this book, but this book definitely sets the stage for interesting events to happen in the 3rd book.
Very little is resolved in this book. This book was truly the rising action of the series making you feel that the climax is just around the corner and me as a reader anxious to get there.
4) The same actors come back to this book to do the voices in this unabridged representation of the book. The acting is very well done and enjoyable throughout.
OVERALL: Fantastic continuation. I can't wait till the end of the trilogy!
Meer lezen
8 mensen vonden dit nuttig
Vertaal recensie in het Nederlands

April
5,0 van 5 sterren Excellent, but...
4 oktober 2003 - Gepubliceerd op Amazon.com
Geverifieerde aankoop
I thought this suffered a little from "middle of the trilogy" syndrome. Dramatic events occurred in the first book, along with the introduction of many interesting characters. Here we seem to be in a bit of a holding pattern while everyone catches his breath and waits for the finale.
Part of it was due to the overall intended atmosphere of the book. It is winter and everything slows to a halt--with only plans being made for when the snow clears and major campaigns can now be fought. Part is due to the mysterious Tribe--Takeo is amongst them, but only interacts with a few lower-members, whose relationships with him don't change much. And surprisingly little is revealed about them--save that what we have guessed or learned from the first book. I wanted a bit more of a climatic arc to be had with that part of the story, but it was not to be.
However, the world remains beautifully, even sublimely rendered. And there is that subtle tension that underlies the events, which pulls the reader along. I greatly enjoyed the first book and am content with this, the second book, and wait eagerly for the conclusion to this compelling tale.
Meer lezen
10 mensen vonden dit nuttig
Vertaal recensie in het Nederlands
Ga naar Amazon.com om alle 108 recensies te bekijken 4,5 van 5 sterren
Terug naar boven
Over ons
Verkoop bij ons
We helpen je graag
© 1996-2020, Amazon.com, Inc. en dochterondernemingen