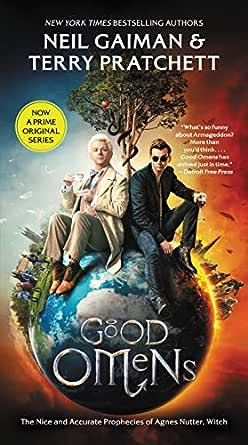 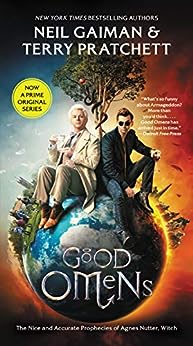 "A direct descendant of The Hitchhiker's Guide to the Galaxy."--New York Times

"A slapstick Apocalypse, a grinning grimoire, a comic Necronomicon, a hitchhiker's guide to the netherworld."--James Morrow, author of Only Begotten Daughter

"The Apocalypse has never been funnier."--Clive Barker

"One Hell of a funny book."--Gene Wolfe

"It could be called The Hitchhiker's Guide to Armargeddon."--Palm Beach Post

The classic collaboration from the internationally bestselling authors Neil Gaiman and Terry Pratchett, soon to be an original series starring Michael Sheen and David Tennant.

“Good Omens . . . is something like what would have happened if Thomas Pynchon, Tom Robbins and Don DeLillo had collaborated. Lots of literary inventiveness in the plotting and chunks of very good writing and characterization. It’s a wow. It would make one hell of a movie. Or a heavenly one. Take your pick.”—Washington Post

According to The Nice and Accurate Prophecies of Agnes Nutter, Witch (the world's only completely accurate book of prophecies, written in 1655, before she exploded), the world will end on a Saturday. Next Saturday, in fact. Just before dinner.

So the armies of Good and Evil are amassing, Atlantis is rising, frogs are falling, tempers are flaring. Everything appears to be going according to Divine Plan. Except a somewhat fussy angel and a fast-living demon—both of whom have lived amongst Earth's mortals since The Beginning and have grown rather fond of the lifestyle—are not actually looking forward to the coming Rapture.

And someone seems to have misplaced the Antichrist . . .

Robert E. Parker
5,0 van 5 sterren A Fantastic Story From Two Fantastic Authors
22 juni 2019 - Gepubliceerd op Amazon.com
Geverifieerde aankoop
This is the third copy of this book I have purchased. My daughter has one and refuses to relinquish it; I don't blame her. I still have my original copy, a first edition, but it is fairly worn out and holds a place of reverence on a shelf of my all time favorite books by my all time favorite authors. Pratchett and Gaiman happen to head the roster of said authors. When Amazon Prime announced the soon to be released series based on the book, Good Omens, I knew it was time to read the book again even though I had re-read it for the God (or his/hers main opposite) knows how many time quite recently. Unfortunately I was afraid my time-worn, much loved, original might not survive another session. Thus my recent purchase of this latest copy. It is sturdy, well printed, it arrived on time and, after reading it again, I have lent it to my son with a stern warning that I WILL have it back. It is, and always has been, a great read, and such is the Prime Video of the series. Read the book, watch the series, and repeat as often as you wish to be entertained. I still mourn the loss of Terry Pratchett but Neil Gaiman wrote a masterful screen play that absolutely works. Start with the book, though, and I very highly recommend it.
Meer lezen

Robin Snyder
4,0 van 5 sterren Perfect for when you just want a good laugh and some ridiculousness in your life.
7 februari 2018 - Gepubliceerd op Amazon.com
Indeling: Kindle-editieGeverifieerde aankoop
“It has been said that civilization is twenty-four hours and two meals away from barbarism.”

This was quirky and a little on the odd side but totally fun. Heaven and Hell have basically been in a cold war for well forever it seems. Ever since Lucifer “An Angel who did not so much Fall as Saunter Vaguely Downwards.” became the bad guy the final show down has been in the works. But now, finally Satan’s son has been born and the prophecies all say that when he is Eleven the end of the world will finally come about.

The humor in this is really incredibly fun and I loved Aziraphale, the Angel who wasn’t necessarily all good, and Crowley the demon who really wasn’t that bad of a guy. Even more I enjoyed the friendship between them and how they worked both together and against each other.

“Hell wasn't a major reservoir of evil, any more then Heaven, in Crowley's opinion, was a fountain of goodness; they were just sides in the great cosmic chess game. Where you found the real McCoy, the real grace and the real heart-stopping evil, was right inside the human mind.”

This had an extensive cast that included the four horsemen (one was a woman) of the apocalypse, a witch or two, some Satanists (they weren’t really bad people), a gang of kids, a witchhunter and a dog.

There are a ton of funny little snippets here and there and I really enjoyed the cut and paste together style that had the reader jumping from group of characters to groups of characters as we go through the countdown to the final days.

This is supposed to be a tv series soon and it will be interesting to see how that goes. I think it will be a good time and lets face it at the end of the world you might as well have a good time.

Perfect for when you just want a good laugh and some ridiculousness in your life.
Meer lezen
40 mensen vonden dit nuttig
Vertaal recensie in het Nederlands

Bernie Gourley
5,0 van 5 sterren What if the Antichrist was raised as a regular kid?
2 mei 2016 - Gepubliceerd op Amazon.com
Nature or nurture? That’s the question at the core of this funny take on the coming of the apocalypse, written by two masters of humorous speculative fiction—the late Terry Pratchett and Neil Gaiman. The end of days is coming. What if the anti-Christ responsible for seeing it through had been switched at the hospital and was raised as a normal kid? Would he be evil enough? If not, how would the apocalypse play out? After a chapter that shows the reader the mix up at the hospital, the bulk of the book takes place over a few days that are supposed to be the last few days of humanity.

There’s an extensive cast of characters including the “gang” of Adam the anti-Christ, the four horse-persons of the apocalypse, angels and demons, witches and witch-hunters, and other sundry characters. However, the characters that most carry the tone and message of the book are Crowley (a demon) and Aziraphale (an angel.) With these two, the authors inject some Taoism into an otherwise Biblical world. That is to say, pure evil and pure good are rarities; there’s always a bit of good amid the bad, and vice versa. Aziraphale can be grumpy, and Crowley’s proclivity to be mischievous has its limits. Being in similar positions, the two bond as low level managers working for Coke and Pepsi might get on because they face similar demands and have similar complaints about management.

Running through the book are mentions of a book called, “The Nice and Accurate Prophecies of Agnes Nutter, Witch.” This witch’s prophecies are quite unusual in that they are invariably correct, and yet are specific. That is, the prophecies aren’t “right” in the sense that astrologers are often “right” by making vague statements that offer no disprovable propositions. This might lead one to believe that the book would be a marvelous guide for making predictions. However, there is still the issue of having been written centuries ago. Items like automobiles and cellphones, that play a major role in life today, were unfathomable. Furthermore, it’s usually not clear who, exactly, a given prophecy applies to. In short, the medieval writing style results in the fact that the prophecies usually only make sense after the fact.