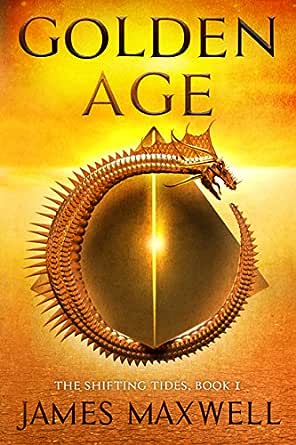 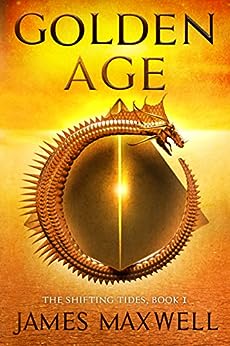 James Maxwell grew up in the scenic Bay of Islands, New Zealand, and was educated in Australia. Devouring fantasy and science-fiction classics from an early age, his love for books translated to a passion for writing, which he began at the age of eleven. Inspired by the natural beauty around him but also by a strong interest in history, he decided in his twenties to see the world. He relocated to London and then to Thailand, Mexico, Austria, and Malta, developing a lifelong obsession with travel. It was while living in Thailand that he seriously took up writing again, producing his first full-length novel, Enchantress, the first of four titles in his internationally bestselling Evermen Saga. When he isn't writing or traveling, James enjoys sailing, snowboarding, classical guitar, and French cooking. --Deze tekst verwijst naar de paperback editie.

Jeni B.
5,0 van 5 sterren Excellent series first - I look forward to the rest!
3 april 2016 - Gepubliceerd op Amazon.com
Geverifieerde aankoop
I really, really enjoyed this book. It appeals to me - Sailors, shape shifters, temples; best of all, very strong capable main characters. I am very excited to see where the book goes next.

As the mom of an avid reading 9-year-old, I am very excited to introduce her to Chloe. There is no mention of sex, violence is very prevalent but not too gory, and the imagery is beautiful. It is always nice to find a book with a great female lead.

M. Smith
5,0 van 5 sterren Entertaining age of mythology adventure
9 april 2016 - Gepubliceerd op Amazon.com
Geverifieerde aankoop
This is an exceptionally well written book. The characters are fleshed out, and the plot is well rounded and believable. The setting is a group of city states in a Mediterranean environment reminiscent of ancient Greece - on the verge of war. Besides humans, there is a race of shape-shifters who can change from human form to become powerful flying dragons or sea serpents - with the limitation that if they remain in animal form too long, they may forget how to return to their human form and must remain animals. The story follows a young prince from a peaceful kingdom who journeys to a war-like, empire-building nation across the sea to learn of their military threat to his homeland - and to rescue the kidnapped daughter of an alley's leader. That may sound like a typical sword 'n sandal adventure, but there are many unusual twists and turns to keep you reading. One of the best parts of the book is that, though first of a series, it has a proper, legitimate ending - unlike so many recent books with seemingly arbitrary endings. I look forward to the next book in the series, and plan read the author's earlier books as well. Recommended.
Meer lezen
56 mensen vonden dit nuttig
Vertaal recensie in het Nederlands

JMC
1,0 van 5 sterren Irritatingly flawed
11 januari 2019 - Gepubliceerd op Amazon.com
Geverifieerde aankoop
Well! What could have been an awesome, gripping story just managed to make me grind my teeth and want to smack the author. Imagine "Marines" in an oar-ship in ancient Greece? That's what the author would want you to believe. James Maxwell you need to research more, and get a proper editor and better beta readers. "Marines" are a modern day American term, not something people would call 'Mariners' in long ago Greco-Roman time. Thankfully you had "hoplites" in the city...so you at least took time to research some things. This was not the only irritating and jarring plot and language oversight, but it was the most annoying. The book was full of this nonsense.
Meer lezen
14 mensen vonden dit nuttig
Vertaal recensie in het Nederlands

Constant Reader
5,0 van 5 sterren Good story, told well
23 augustus 2017 - Gepubliceerd op Amazon.com
Geverifieerde aankoop
This is the first book in a young adult fantasy series (the Shifting Tides) set in an imaginary world with imaginary creatures. There are two main protagonists: Chloe daughter of the First Consul of Phalesia and Dion, second son of the king of Xanthos. The two countries border each other. The story begins with an earthquake and the arrival in Phalesia of a massive and mysterious warship that has been damaged. The warship and its occupants are a clear threat. Despite all diplomatic courtesies, when the ship leaves, Chloe has been kidnapped. Chloe is intelligent, resilient, strong, and independent. Dion is also. It is a good story, told well. The main fantasy elements involve shape shifting creatures. When the creatures remain in shape shifted form or shift forms too often they run the risk of losing their more human characteristics and going wild. The wild form is dangerous to people so there is controversy about the danger of them all. The book contains adventures, dangers, treachery, some violent images of attacks by fantasy creatures, warfare and torture, politics, and some positive images of sibling support and loyalty to friends. There is no innuendo or sex although your young adult will learn exactly what it means to be a eunuch. I did not find it hard to get oriented in the created world or caught up in the story. It was entertaining. The first story does not end with a cliff-hanger, but there are clearly more stories to be told. I have already bought the next one.
Meer lezen
15 mensen vonden dit nuttig
Vertaal recensie in het Nederlands

Fourlocks
4,0 van 5 sterren Like an Ilean Bireme
23 april 2020 - Gepubliceerd op Amazon.com
Geverifieerde aankoop
This first in a series of fantasy novels by James Maxwell starts quite slowly, like a boat pushed into the waves, as locations, characters and situations are introduced. An earthquake has just occurred and three nations (?) suffer effects. Phalesia, ruled by Consuls, is hardest hit, suffering structural damage and deaths. Xanthos, its neighbor kingdom, experienced minor damage. An unfamiliar Ilean warship, the Naxotardis, beaches at Phalesia to repair earthquake-related storm damage. These three nations, resembling the societies of ancient Greece and Rome, worship various Gods and are prone to superstition, feeling the phenomenon is a bad omen. No wonder. This is a time of Gods, magi, oracles and, just as importantly, a race of shape-shifters called the eldren who some friend, some fear and some absolutely hate. These creatures are integral to the story between these three nations. Most of the prinicipal characters in the novel show their true colors early. Some do not. There are notable heroes and villains in these pages, all of whom are forever changed by the events that unfold. Once Captain Kargan leaves Phalesia for the Kingdom of Ilea, the story gains momentum and rhythm, the sails catching wind and the oars biting the sea. When Dion's adventure begins, the plot attains full ramming speed and doesn't flag until the denouement. This is a story of bravery, sacrifice, secrecy, manipulation, prejudice and, most damaging, greed. It is a very entertaining, easy read. There were about two words with which I was unfamiliar. There is no mention of sex, however, violence is quite prevalent, including the use of impalement and the result of castration. Your judgement determines what age is appropriate to read this. I expect that the sequels will probably pace much better as newer characters and situations are gradually introduced. I enjoyed it and would be interested in reading further entries in the series.
Meer lezen
2 mensen vonden dit nuttig
Vertaal recensie in het Nederlands
Ga naar Amazon.com om alle 1.110 recensies te bekijken 4,2 van 5 sterren
Ontdek het beste van shopping en entertainment
Gratis en snelle bezorging van miljoenen producten, onbeperkt streamen van exclusieve series, films en meer
> Ontdek Prime
Terug naar boven
Over ons
Verkoop bij ons
Amazon-betaalmethoden
We helpen je graag
© 1996-2020, Amazon.com, Inc. en dochterondernemingen