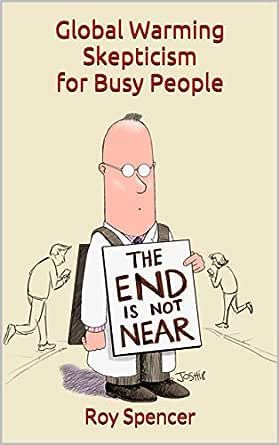 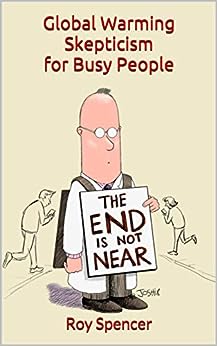 This book draws on decades of climate research to explain why the threat of anthropogenic climate change has been grossly exaggerated. Global warming and associated climate change exists - but the role of humans in that change is entirely debatable. A little-known aspect of modern climate science is that the warming of the global atmosphere-ocean system over the last 100 years, even if entirely human-caused, has progressed at a rate that reduces the threat of future warming by 50% compared to the climate model projections. To the extent warming is partly natural (a possibility even the IPCC acknowledges), the future threat is reduced even further. This, by itself, should be part of the debate over energy policy – but it isn’t. Why? The news media, politicians, bureaucrats, rent-seekers, government funding agencies, and a “scientific-technological elite” (as President Eisenhower called it) have collaborated to spread what amounts to fake climate news. Exaggerated climate claims appear on a daily basis, sucking the air out of more reasoned discussions of the scientific evidence which are too boring for a populace increasingly addicted to climate change porn. Upon close examination it is found that the "97% of climate scientists agree" meme is inaccurate, misleading, and useless for decision-making; human causation of warming is simply assumed by the vast majority of climate researchers. In contrast to what many have been taught, there have been no obvious changes in severe weather, including hurricanes, tornadoes, droughts or floods. Despite an active 2018 wildfire season, there has actually been a long-term decrease in wildfire activity, although that will change if forest management practices are not implemented. Proxy evidence of past temperature and Arctic sea ice changes suggest warming and sea ice decline over the last 50 years or so is not out of the ordinary, and partly or even mostly natural. The Antarctic ice sheet isn't collapsing, but remains stable. The human component of sea level rise is shown to be, at most, only 1 inch per 30 years (25% of the observed rate of rise); and the latest evidence is that more CO2 dissolved in ocean water will be good for marine life, not harmful. Admittedly, continued emissions of CO2 from fossil fuel burning can be expected to cause (and probably has caused) some of our recent warming. But the Paris Agreement, even if extended through the end of the 21st Century, will have no measurable effect on global temperatures because the governments of the world realize humanity will depend upon fossil fuels for decades to come. Despite news reports and politicians' proclamations, international agreements to reduce CO2 emissions are all economic pain for no observable climate gain. What government-mandated reliance on expensive and impractical energy sources will do is increase energy poverty, and poverty kills. This downside to illusory efforts to “Save the Earth” is already being experienced in the UK and elsewhere. If people are genuinely concerned about humanity thriving, they must reject global warming alarmism. In terms of environmental regulation, the end result of the U.S. EPA's Endangerment Finding will be reduced prosperity for all, and climate gain for none. The good news is that there is no global warming crisis, and this book will inform citizens and help guide governments toward decisions which benefit the most people while doing the least harm.

Lance A. Wallace
4,0 van 5 sterren A good collection of data on climate change
16 september 2018 - Gepubliceerd op Amazon.com
Geverifieerde aankoop
Spencer has directed a NASA satellite series able to measure global warming for almost 40 years.. There is a clear increase in global temperature, at about 0.13 Celsius per decade. Interestingly, the Arctic is warming at about double that rate (0.25 C per decade), whereas the Antarctic has been rock steady at 0.0 C per decade, a fascinating relationship not well predicted by present theory. Spencer provides data on sea level rise, hurricane frequency, and other aspects of climate change, generally with an indication that none of these are showing accelerating rates of change. This is a good collection of data and well worth buying as a good reference for the last 40 years of climate change.
Meer lezen
26 mensen vonden dit nuttig
Vertaal recensie in het Nederlands

Scott Crosby (scrosby52@aol.com)
5,0 van 5 sterren Clears away the climate change fraud nonsense!!
25 september 2018 - Gepubliceerd op Amazon.com
Geverifieerde aankoop
This great book shows the lack of science behind the climate-change alarmists, the lack of consensus (1% vs. the claimed 97%), the claims without evidence, where the evidence actually points, and, as important, _why_ climate change is being promulgated: political control by people who want to be able to dictate how you lead your lives, and the 80% of the countries in the UN who are "third-world", who would like to "redistrbute" teh wealth of the well-to-do countries to themselves; i.e., to the dictators who rule those third-world countries. And the UN and the IPCC are their tools to do it. Worried about "too much" CO2? The world's plants would love more! The current CO2 levels are not much more than starvation-level for plants. If we could double the amount of CO2 in the air, agriculture would see trillions of dollars worth of more plant life grown (and that increase in absolute terms is still very small - _not_ dangerous to us). There is lot more in this book - it is stuff you should know about. Being a Kindle book, the information provided is backed up with links to websites containing the research data, etc. - much better than a traditional bibliography. Don't delay: you owe it to yourself and your children to read this book!
Meer lezen
22 mensen vonden dit nuttig
Vertaal recensie in het Nederlands

B. Berger
5,0 van 5 sterren Question Everything!
27 april 2019 - Gepubliceerd op Amazon.com
Geverifieerde aankoop
If you want to be an NPC and believe everything your wise overlords say, avoid this book. This will actually make you question the motives of such extremely honest and reliable institutions as: the UN, US Congress, and Greenpeace. Of course such non-political hallmarks of truth and virtue would never have agendas of their own! <sarcasm off> I was a NASA scientist and I'm completely shocked by the extremely poor, politically motivated, and corrupt "science" used to promote the idea of catastrophic global warming. This book concisely highlights the counter arguements with reasoned skepticism--the hallmark of any scientific discussion. Anyone who says things like "the debate is over" has an agenda and knows nothing about science.
Meer lezen
7 mensen vonden dit nuttig
Vertaal recensie in het Nederlands

Bjorn Johansson
5,0 van 5 sterren Best summary and primer of what's real in the climate debate
15 september 2018 - Gepubliceerd op Amazon.com
Geverifieerde aankoop
Well written and an absolute must read for the genersl population. Only topic I miss is the blatant and biased adjustment and manipulation of the temperature records.
Meer lezen
14 mensen vonden dit nuttig
Vertaal recensie in het Nederlands