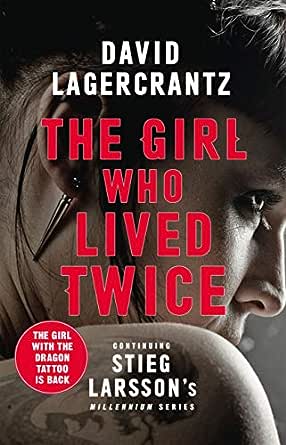 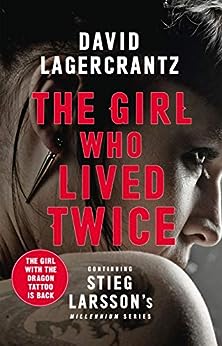 "A murder mystery inside an espionage conspiracy wrapped in an action thriller--a unique concoction that should leave Salander's legion of followers clamoring for more." -The Wall Street Journal

"A quest for revenge and atonement that plumbs the depths of Russian troll factories and scales the heights of Mount Everest." -TIME

The sixth in the Millennium series featuring THE GIRL WITH THE DRAGON TATTOO - 100 million copies sold worldwide.

"What are you going to do now?"
"I will be the hunter and not the hunted."

Lisbeth Salander's mentor and protector Holger Palmgren is dead, and she has been gone from Stockholm since his funeral. All summer, Mikael Blomkvist has been plagued by the fear that Salander's enemies will come after her.

He should, perhaps, be more concerned for himself.

In the pocket of an unidentified homeless man, who died with the name of a Swedish government minister on his lips, the police find a list of telephone numbers. Among them, the contact for Millennium magazine and the investigative journalist Mikael Blomkvist. Following the scorched trail of her twin sister Camilla to Moscow, Salander nevertheless continues to watch over her old friend. Soon Blomkvist will need her help. But first, she has an old score to settle; and fresh outrage to avenge.

The next episode in David Lagercrantz's acclaimed continuation of Stieg Larsson's Dragon Tattoo series is a thrilling ride that scales the heights of Everest and plunges the depths of Russia's criminal underworld. In a climax of shattering violence, Lisbeth Salander will face her nemesis.

For the girl with the dragon tattoo, the personal is always political - and ultimately deadly.

Translated from the Swedish by George Goulding

“The Girl Who Lived Twice” is book #6 in the Lisbeth Salander/Millennium series that was started by Stieg Larsson. It’s a pale imitation of his robust, quality fiction. David Lagercrantz tried to use the plot as the driving force of this installment but he was not successful. In order for a book to be driven by the plot it needs strong characters and Lagercrantz fails at this task, in a big way.

The heroine in this story is hollow and empty and this is her 6th book; development is seriously lacking. Actually, the new character of Mikael and the secondary “baddies” were far more interesting. The relationship between Lisbeth and her sister Camilla could have been the driving point for the story but it got lost in the uneven plotting.

Parts of the story read well and are engaging. Lagercrantz can write thriller and mystery fiction and that aspect of the book flowed well, at times. There are lots of layers and complexities that make the story interesting during the central part of this novel. Unfortunately, all the necessary pieces just don’t come together to support the arcs.

The ending of this book is just preposterous, contrived and convoluted. Plot points need to be tied up, questions need answers, people need resolutions books need quality endings or they are just a collection of words. This is not a cliffhanger, it’s a very sad bon voyage for this once premier series📚
Meer lezen
81 mensen vonden dit nuttig
Vertaal recensie in het Nederlands

TapTheLine
2,0 van 5 sterren An uninspired conclusion in D. Lagercrantz's trilogy.
27 augustus 2019 - Gepubliceerd op Amazon.com
Geverifieerde aankoop
Let me begin by stating that I was in favor of the continuation of Millenium series by an author other than the late Stieg Larsson and I've enjoyed the first two books ("The Girl in the Spider's Web", "The Girl Who Took An Eye for An Eye") but this one failed to meet my, admittedly high, expectations. It is an overall mediocre attempt in bringing beloved fictional characters such as Lisbeth Salander or Mikael Blomkvist back to life, in a story which lacks a clear direction and a plot that seems to be flat and without the necessary esciting twists and turns that usually make a crime novel a success.

Lisbeth has a secondary role here, and even though her conflict with her sister Camilla is built from the early pages, she is mainly busy with hacking in order to help Mikael to uncover the truth about a suspicious suicide of a foreign man who was once a guide at Mountain Everest. The main plotline seems compelling enough in the first part of the novel but it quickly reveals its weak structure and lack of inspiration. When the reader learns the truth about the beggar's suicide in the third and final part of the book, he is not sure if he really cares any longer. The subplot concerning the feud between Lisbeth and Camilla is equally dull and the final showdown is so implausible that almost makes you laugh.

David Lagercrantz's prose has a nice flow, but seems to be rather naive in some parts while the characterization in "The Girl Who Lived Twice" is not as strong as it was in the previous two novels. Both the two protagonists, Mikael and Lisbeth, seem to be constantly out of depth, while the secondary characters and villains, who were one of the most interesting aspects in S. Larsson's original "Millenium" trilogy, are outlined in an awkward manner. Lagercrantz tries to connect the book's plotline with those of the previous two but even that is unsuccessful as the result seems -more or less- forced.

There was a major conflict between the Larsson's family members, Stieg's father and brother, and Eva Gabrielsson, Stieg's partner for more than thirty years, regarding the rights in the "Millenium" legacy. Gabrielsson claims to be the only person suitable to continue the series, as she was involved in some parts in the original trilogy -though not in the writing process itself- mainly having to do with some of the characters and locations used in the novels. Thus, she was not supportive to D. Lagercrantz's writing endeavor, but the Larsson family, who finally inherited the rights, aggreed and gave him the green light to extend the series. The reading audience was divided into two groups, with some absolutely loving the new novels and others hating it. Personally, I was positive from the beginning as I'm in favor of bold writing experiments like this one. Unfortunately, "The Girl Who Lived Twice", which is the last book in the series written by Lagercrantz, left me with a bitter taste and as I finished reading, I couldn't help but feeling kind of nostalgic remembering the original trilogy's brilliance.
Meer lezen
40 mensen vonden dit nuttig
Vertaal recensie in het Nederlands

RTM
2,0 van 5 sterren Disappointing
30 augustus 2019 - Gepubliceerd op Amazon.com
Geverifieerde aankoop
The two main characters are back for another action mystery, but I found this latest installment in the series to be mediocre. I agree with the other reviewers' criticisms, especially that the character of Lisbeth Salander is poorly developed. She becomes like an invincible cartoon character, which is a far leap from the troubled vulnerable young woman of the early novels. In addition, the plot seems unnecessarily complex, and I found it difficult to keep track of (or care about) the numerous characters. If you haven't read the first three novels (by Steig Larsson), by all means read those.
Meer lezen
40 mensen vonden dit nuttig
Vertaal recensie in het Nederlands

Bebop
1,0 van 5 sterren This series needs a New Author
5 september 2019 - Gepubliceerd op Amazon.com
Geverifieerde aankoop
First of all I am a big fan or the original three Salander novels and the first book by David Lagecrantz was actually pretty good but its gone downhill since and this is the worst. The author has turned Salander into just another character. Can you imagine a James Bond film that features Moneypenny and Bond is just another actor? Someone needs to write this series who understands Salander. I must add even on its own terms this book is a bore. The main plot about what went on top of Everest has barely enough substance to fit into a short story and I found myself skipping paragraphs looking forward to the end of this book.
Meer lezen
30 mensen vonden dit nuttig
Vertaal recensie in het Nederlands
Ga naar Amazon.com om alle 554 recensies te bekijken 3,8 van 5 sterren
Terug naar boven
Over ons
Verkoop bij ons
We helpen je graag
© 1996-2020, Amazon.com, Inc. en dochterondernemingen