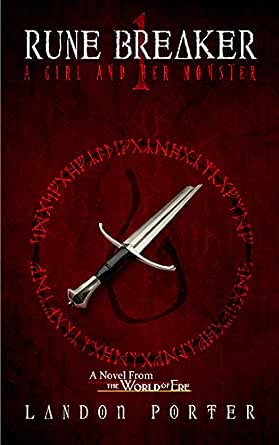 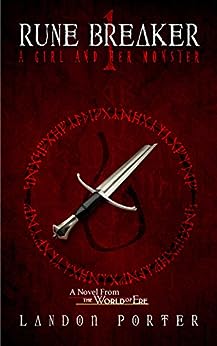 There is a legend in the world that tells of a weapon sought after by only the most wicked of souls. Passed down through the years since before the coming of the gods, it grants its master the power to conquer and rule. The Rune Breaker.

After decades of dormancy, it just found a new master in Taylin, an escaped slave, who stumbled upon its resting place and found it bound to her will. But as it happens, the Rune Breaker is really a person: the shapeshifting master and dark mage, Ru Brakar, who has been cursed to serve whoever finds him since prehistory.

Taylin refuses to keep a slave, but an accidental order to Ru lands them both flung far into the future, where they must rely on one another and their new allies to brave a world alien to both of them and the attentions of a foe who stalks them in hopes of gaining access to a power beyond the gods.

Collects the first book of the web serial novel, Rune Breaker by Landon Porter with cover art by Clay Kronke.
This is a second edition, featuring more extensive editing.
click to open popover

Supified
2,0 van 5 sterren Dull and generic, the title is not really descriptive of the story
19 juli 2018 - Gepubliceerd op Amazon.com
Geverifieerde aankoop
Rune Breaker book one, a girl and her Monster certainly had some interesting ideas to start. Personally the title alone was enough to get me to read it, or at least to give it a try. The notion of a girl whom has control over a monster made me imagine a little helpless girl whose monster is something, well, monstrous and that they might together do amoral activities together in her goals. This isn't a new concept, I've seen it before, but it is a under utilized concept. Those were my expectations coming into the story and the first hook was delivered by the title alone.

The first thing you should know is the title lies, or at least misleads. A girl can refer to a female, but it implies a young female, that maybe innocent and helpless. There is certainly a lot of implication pairing the word girl with her monster. This suggests contrast between the two. My above description of my assumptions were based on the wording of the first hook, so it is was profound disappointment that it wasn't really descriptive of the content in the book. The girl is full grown and fully capable of taking care of herself. She's not innocent, she's not weak, she could be described as a monster herself. One of the first thing she does is breaks her sword murdering bred dogs of war. Yes she gets in over her head, but none of this is really how you imagine someone to be if they were described as 'a girl and her monster'. Why is this bad? Well because that was the first hook! If you started reading the book hoping for something resembling what the first hook is then you're going to start this book with a waning interest.

One important thing for a story to do generally is try to be coherent, have a solid armature, a foundation. This can often be described as a moral and while this book sort of hints at morals, for the most part it feels like the author had a plot in mind and ran with that. Sure you could say what the story is about, but I'm not so sure it is as easy to say what the purpose is as the story seems to just be a string of events. Do they all fit? Does all of the action make sense? I get the monster (whom by the way turns out to just be a man/wizard/ghost thing) is from across time, and civilizations, but why does he at this way or that. Why does he repeat protocols and magic spells like a computer system displaying to a display what it is doing. The book tries to explain this, but none of it really bares out.

We spend a lot of time, about twenty percent, exploring these two main characters, but this is a gamble. If you the reader do not feel invested in the main, or the 'rune breaker' than what supports your reading the story? If you do find something, good for you, the next eighty pages will put us with another group of characters, halflings and from here the next biggest problem happens. Everyone speaks in the same voice. The author makes it rather hard to tell the charaters apart because none of them feel that unique. The Rune Breaker is far and away the only character than has much more than a flat personality besides the MC, but no one seems to exist outside of the plot with the MC. It is as if their lives were just about the main and their motiviations are as simple as a single directive. I'm trying not to give out spoilers, but there really is hardly anything to spoil. To call this book boring would be kind of an understatement. For me there was no second hook beyond the title.

Some readers will starts to get an intention to ship the leads and this is clearly the intent of the author as there are hints here and there of a possible shipping. Not your usual hints of the characters trying to ship themselves, but rather overtly expressing how ridiculous it would be. IE protesting too much. Later in the story the Rune Breaker argues that seeing the lead topless would mean nothing to him, but if that were truly so, why say it at all? Why make the Rune Breaker a him for that matter? Also this book seems to ignore the existence of LGBT entirely, which is always a pet peeve of mine. Maybe I missed something, but other authors can usually in a sentence at least indicate that they recognize it is a thing. I didn't notice this book doing it.

In conclusion this book felt like high fantasy without any real point or purpose. The story is dull, the characters are dull and things seem to be tossed into it without any real thought about what or why. For me a story about a girl and a monster would have been cool, but make the girl a girl and the monster monsterous. Future hooks such as the notion of a romance feel like very cheap gimmicks designed to sell with a quick and guilty fix, also lacking the real foundation that would make any of it make sense. When Ru says he shouldn't be interested in that I agree, but I doubt that is the intent of the author. Will I find out? No. Personally that's enough of the Rune breaker books, read if you must, but there is better stuff out there.

Dawn Swan
2,0 van 5 sterren Buyer Beware
31 mei 2015 - Gepubliceerd op Amazon.com
Geverifieerde aankoop
I have read the whole "series". Book 1 though 4. This review includes all books. These books are an example on how to grab the reader in the first book and then drag one book out to make a series. I enjoyed Book 1. Even with the lack of editing. By the time I got to book 4, I was not only skipping sentences, but also whole paragraphs and even a couple chapters. Every character, no matter how small their part, was worth paragraphs of description. So many characters were inserted into the story that it was impossible to remember later who they were and where they disappeared to. It didn't help that the writer kept changing names. Using their full name and their nickname throughout the book. By Bk Four I gave up trying to figure out if it was a new character or an old one with a different name. If you want a book that explains in detail how to build and use every Spell, this is the one for you. There are at least 20 spells. I didn't count -there could have been more. It is difficult to read a book with an over abundance of characters, who have been put together by a large variety of pieces and keep anything straight. Is this one a dragon crossed with a human, or is he an ogre, miere, and human cross or did some mage just throw a bunch of different body parts at the wall and whatever stuck become what ever? To me this was the worse case, I have seen so far, of stretching one book into many. If you went through the book blacking out all the unneeded descriptions and repeated explanations you might have a novella. A novella with lots of editing problems.
Meer lezen
14 mensen vonden dit nuttig
Vertaal recensie in het Nederlands

Arref Mak
4,0 van 5 sterren Clever writing and solid characters
31 mei 2019 - Gepubliceerd op Amazon.com
Geverifieerde aankoop
This is a worthy start to an interesting premise; a warrior and a mage pushed forward through centuries arriving to make their way in a world they don't know much about.

The world building is smooth and has gravitas.

Looking forward to learning more about the tension between the two travelers.
Meer lezen
Vertaal recensie in het Nederlands

Francine Herbst
4,0 van 5 sterren This book is sci-fi
18 september 2019 - Gepubliceerd op Amazon.com
Geverifieerde aankoop
This book is so far out that it is hard to follow at first. Soon you get to cheer for the monster and find that he really isn't a monster at all. He is just a victim of circumstances.
Meer lezen
Vertaal recensie in het Nederlands