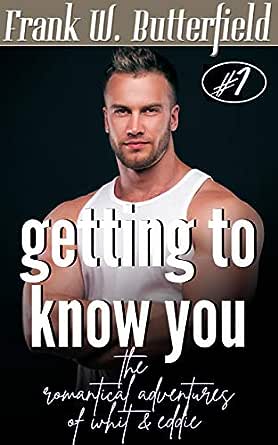 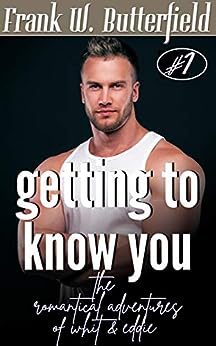 Howdy! I'm Eddie Smith and this is the story of my first romantical adventure with my new boyfriend, Whit Hall.

I'm 52 and a big bear of a guy. Whit is 35 and a tall, muscled retired pro football player. Apparently, opposites do attract!

Funny thing is, though... Whit knows more about classic movies than me and, it turns out, he loves 70s music as much as I do... Maybe we're not so different, after all...

Anyway, we're here on Mo'orea, the island next door to Tahiti, and it's amazing! We've got a nice bungalow over a beautiful harbor and, well, it's beyond romantic...

What you might not know is that Whit and I have only known each other for a few days. And, even though we had a rocky start, the topic of marriage has already come up. Too soon? Probably...

And like the song says, we're getting to know each other...

Only thing is... There's this guy who's following us around the island and he might be taking pics of us because, well, it's a big deal when Whit Hall, only son of a big-time megachurch preacher who hangs with Trump, turns out to be gay...

I hope the internet doesn't find out!

Ulysses Grant Dietz
4,0 van 5 sterren A winsome and profound rabbit hole to dive into headfirst. Nick and Carter live!
21 juli 2019 - Gepubliceerd op Amazon.com
Geverifieerde aankoop
“And I knew better. I’d been listening to Dan Savage for a really long time. I figured Dan would tell me to cool my jets and he wouldn’t be wrong.”

So I’ve gotten sucked into yet another of Frank Butterfield’s charming, heartfelt rabbit holes. This is the world of here and now, of evangelical power brokers and presidential tweets. Nonetheless, Nick Williams and Carter Jones, and even great uncle Paul Williams, are here. Not just through their chosen heirs, Mario Ossler and Bob Jenkins, but in spirit, through Eddie Smith’s ability to channel the long-gone gay heroes.

I can’t tell you how weirdly comforting that is. Those of us who continue to live Nick and Carter’s lives through the epic series that started Butterfield down this path, can now leap into the future (i.e. the present) and bask in the warmth of their courage and wisdom and magic billionaire powers. This is not Tolstoy, but it is awesome.

So Eddie, a chubby 52-year-old bear from Daytona Beach by way of Texas and many other places (sounding suspiciously like the author, one must note), has managed to capture the heart of Whit Hall, a 35-year-old recently retired pro football star – an athlete who’s been abstinent and deeply religious all his life because of his celebrated evangelical family.

Mario and Bob are trying to keep Eddie and Whit’s fated meeting a secret, but even the vast reach of WilliamsJones can’t protect them in this day of social media. The president tweets about them, because of course he knows Whit’s father, and the proverbial shit hits the fan.

There are also two murders which, if you think about it, is part of the rhythm of the Nick & Carter books. However, just as with those novels, you can’t let that distract you from the real meat of the story that spring from Butterfield’s imagination: the emotional and psychological development of these two strong, independent men, who have found their lives brought together by forces that seem outside this world.
Eddie Smith has issues, issues that are more subtle than the obvious, freak-out issues of Whit (famous religious straight athlete suddenly comes out and runs off with a hefty middle-aged guy). Eddie has, like so many gay men in my lifetime, been taught that he is not destined to be happy or to have the love of his life, because he is not gym-slim, because monogamy is not what liberated men get, and because love is not something LGBT people deserve. Oh, Eddie is out and proud (and, amazingly, Whit is as well, suddenly and powerfully, showing what a mensch he is). But the messages of our culture are deep and strong. Our inner doubts and fears rule us with a tighter grip than we know, even when we know it.

Nick Williams, Mario and Bob, and even, amazingly, Carter Jones, are all trying to inspire Eddie to live his dream, and not give in to his fears. It is that process that makes this book both winsome and, ultimately, profoundly touching. Along the way we are surprised in many ways and begin to see that the world, despite everything, is better than it was in Nick and Carter’s days.

There are only so many rabbit holes that Frank Butterfield can coax me down, but I’m glad I dropped into this one.

Leigh
5,0 van 5 sterren A Wonderful Read
24 april 2019 - Gepubliceerd op Amazon.com
Geverifieerde aankoop
Eddie and Whit are a great addition to Frank's wonderful panoply of characters. Neither of them are perfect, but instead are very human, learning, growing and getting to know each other as people do. I'm loving them. I also love how Frank has connected this new series with Nick and Carter. It makes for a whole new level of fun to the story. I just wish that Frank could clone himself so that we could get books faster. Come to think of it, though, if he could, I'd never stop reading, so it's probably just as well.
Meer lezen
2 mensen vonden dit nuttig
Vertaal recensie in het Nederlands

bheath
5,0 van 5 sterren Outstanding characters
24 april 2019 - Gepubliceerd op Amazon.com
Geverifieerde aankoop
This book answered so many questions for me about Nick and Carter, Mario and Bob. I enjoyed the intro to Whit and Eddie in their intro but this was so much better. Love their relationship and the thought that it is never to late for "the one". I hate that Nick and Carter are gone but not forgotten and we still hear from them every so often. I enjoy all the author's series and am looking forward to the next one--whatever it may be.
Meer lezen
2 mensen vonden dit nuttig
Vertaal recensie in het Nederlands

Amazon Customer
5,0 van 5 sterren This Is My New Go-to Series!
24 mei 2019 - Gepubliceerd op Amazon.com
Eddie! Where have you been all my life? Please, please keep the adventures of Whit and my beloved Eddie going. With the amazing Nick and Carter mystery series and then the new Daytona Beach stories I figured I'm set. I have read everything this author has written but prefer the historical mysteries that he tells so well. And then along came "Chasing Eddie" and I was hooked! And now with this new book set in the Nick and Carter universe, we continue to share in the beautiful, funny and exciting adventures of the relatable Whit and Eddie. I loved learning about the generations that came after Nick and the gang, too! I was unable to set this book down and am already wishing I had a new Eddie book in my hands!
Meer lezen
Vertaal recensie in het Nederlands
Ga naar Amazon.com om alle 9 recensies te bekijken 4,7 van 5 sterren
Terug naar boven
Over ons
Verkoop bij ons
We helpen je graag
© 1996-2020, Amazon.com, Inc. en dochterondernemingen