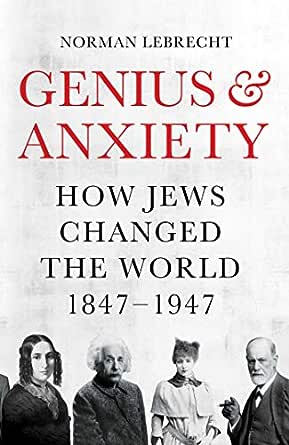 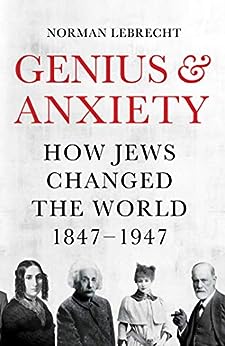 Marx, Freud, Proust, Einstein, Bernhardt and Kafka. Between the middle of the nineteenth and twentieth centuries a few dozen men and women changed the way we see the world. But many have vanished from our collective memory despite their enduring importance in our daily lives. Without Karl Landsteiner, for instance, there would be no blood transfusions or major surgery. Without Paul Ehrlich no chemotherapy. Without Siegfried Marcus no motor car. Without Rosalind Franklin genetic science would look very different. Without Fritz Haber there would not be enough food to sustain life on earth.

These visionaries all have something in common – their Jewish origins and a gift for thinking outside the box.

In 1847 the Jewish people made up less than 0.25% of the world’s population, and yet they saw what others could not. How?
click to open popover

Aran Joseph Canes
5,0 van 5 sterren The Personalities Behind the Enigma of Jewish Modernity
7 december 2019 - Gepubliceerd op Amazon.com
Geverifieerde aankoop
Genius and Anxiety is a masterpiece but in a particular genre. In a sweeping survey of some one hundred years of Western culture, Lebrecht carefully details the stories and personalities of the Jewish figures who did so much to shape it. While written from a rather typical high culture liberal perspective, Lebrecht discusses artists, scientists and rabbis from all parts of the cultural, political and religious spectrums. The book is so well-written and gripping it is sure to be a classic in the already crowded field of Judaic literature.

One will learn the biographies of well-known characters like Proust and how his Jewish ethnicity influenced A Remembrance of Times Past and lesser known characters such as Eliza Davis who did much to correct Dickens’ latent anti-semitism.

That said, the book also has its limitations. Lebrecht focuses so much on the personalities and stories of the Jews who shaped Western culture that his description of their actual contributions is rather shallow. Nor is the enigma of why the Jews, as opposed to some other people, contributed so much to modernity well explained.

The title of the book is about as much as the author chooses to probe this question. Jews throughout this era were outsiders in a constant state of anxiety about their place in society and even their personal safety. As such, they were in a unique position to criticize and transform Western civilization.

Genius and Anxiety is an original book about an already well-discussed era of history. By focusing on the personalities and stories of the Jewish shakers of the modern West, Lebrecht has written a genuine masterpiece. But excitement over what he has achieved should be measured by the fact that there are questions and topics left not only unanswered but also unexplored. Lebrecht concludes the work with a coda that the perennial Jewish question remains unsolved. But I would add that Lebrecht’s book raises many Jewish questions that still perplex modernity.
Meer lezen
25 mensen vonden dit nuttig
Vertaal recensie in het Nederlands

Samuel W. Needleman
3,0 van 5 sterren Well-written and very informative.
17 december 2019 - Gepubliceerd op Amazon.com
Geverifieerde aankoop
I learned a tremendous amount from reading this book. I thought that the histories of communism and Zionism were very interesting and well written. At times, however the book seemed to get bogged down with minute detail. There should be subdivision based on the name of the person being discussed , with the name of the person as the title for that piece of the text. With his way of introducing a new person, it was often confusing as to which person was being discussed.
Meer lezen
8 mensen vonden dit nuttig
Vertaal recensie in het Nederlands

Bob G
5,0 van 5 sterren Wonderfully written, powerful insights, and as topical as today’s headlines
20 december 2019 - Gepubliceerd op Amazon.com
Geverifieerde aankoop
An important and expertly crafted book! It gets in and around people and events that we thought we knew, but not quite. Served up whole yet effortlessly, Lebrecht gives insights into a topic that is timeless, and for better and worse topical. The Jewish experience has uniquely enriched the world, and yet. Despite of that uniqueness, or because of it? The anxiety that the title references informs the identity of many Jews, but is framed by a thousands year history that has always set us apart. It’s a narrative that is real and relevant for Jews and non-Jews alike.
Meer lezen
6 mensen vonden dit nuttig
Vertaal recensie in het Nederlands

S
5,0 van 5 sterren Fascinating book
7 januari 2020 - Gepubliceerd op Amazon.com
Geverifieerde aankoop
Wonderful historical review with intertesting stories about Jews who changed the world, but were also changed by the world. You may be surprised by the number of people who were so innovative in so many areas. Insights into their lives that you may have never known. Written in a very readable style. Highly recommend this book.
Meer lezen
2 mensen vonden dit nuttig
Vertaal recensie in het Nederlands

Bookreporter
5,0 van 5 sterren Norman Lebrecht teases out more than 100 years of Jewish lore in this dense, entertaining work
9 december 2019 - Gepubliceerd op Amazon.com
Starting with the Communist Manifesto and ending on the brink of another new chapter of world history --- the foundation of the state of Israel --- Norman Lebrecht presents an expanded view of Jews and Jewishness.

Karl Marx was the guiding intellectual light in a world-altering revolutionary movement. Felix Mendelssohn composed grand choral music with Christian themes. The mind of Albert Einstein dominated the scientific world. Sigmund Freud invented the modern conception of psychology. Benjamin Disraeli argued for a bill that made it possible for non-Christians to serve in Parliament. Irving Berlin extolled the virtues of Christian holidays for the masses with “White Christmas” and “Easter Parade.” These are among the pantheon of famous Jews who Lebrecht cites for their well-known influence on mainstream philosophy, knowledge and culture.

Intermingled in this shimmering chronology are many Jews less celebrated but equally fascinating. Eliza Davis, the Jamaican-born daughter of a synagogue cantor, sent letters of criticism to Charles Dickens concerning the character of Fagin, the “very old shriveled Jew” whose scurrilous personality was an integral part of the famous Dickens novel, OLIVER TWIST. Through polite exchanges, Davis inveigled the at-first reluctant author to ameliorate his depiction of the old man; doing so arguably gave his work more perennial popularity.

Another independent Jewish woman created the remarkable lines “Give me your tired, your poor…,” which grace the Statue of Liberty. “Emma Lazarus,” Lebrecht states, “has given the United States of America its human face.” And a little-known Lithuanian cantor, Abraham Zvi Idelsohn, sought to establish the connection between ancient Jewish prayer song and the sacred tonalities of other Middle Eastern religious traditions. Though decried for these views even by those of his own faith, especially Zionists, Idelsohn would also compose “Hava Nagila,” widely considered now to be “an Israeli anthem.”

Invoking heroic, creative, courageous images through the large panorama and the small vignette, Lebrecht, a celebrated music writer, teases out more than 100 years of Jewish lore in this dense, entertaining work. He shows that those extolled were not all alike --- many were irreligious, some were intermarried, and all had strong personal opinions and may or may not have agreed with the majority of their peers.

What is clear, though, from Lebrecht’s many examples is that Jews have exerted themselves through a compulsion to succeed, never to leave well enough alone. Our world would be a poorer place without their perseverance --- and their humor, as when Einstein described his famous theory as such: “When you sit with a nice girl for two hours, you think it’s only a minute, but when you sit on a hot stove for a minute you think it’s two hours. That’s relativity.”