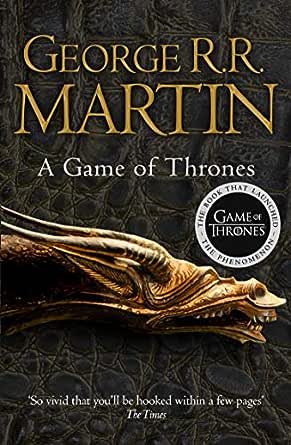 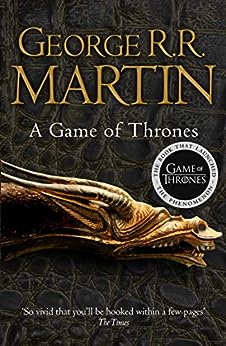 A Game of Thrones (A Song of Ice and Fire, Book 1) (English Edition) Kindle-editie

"The major fantasy of the decade . . . compulsively readable."--Denver Post "We have been invited to a grand feast and pageant: George R.R. Martin has unveiled for us an intensely realized, romantic but realistic world."--Chicago Sun-Times "A Best Book of 1996: Martin makes a triumphant return to high fantasy . . . [with] superbly developed characters, accomplished prose, and sheer bloodymindedness."--Publishers Weekly, starred review "A splendid saga . . . . Inventive and intricately plotted."--BookPage "Magic . . . George R.R.Martin's first fantasy epic [is set] well above the norms of the genre."--Locus "Such a splendid tale and such a fantasticorical! I read my eyes out and couldn't stop 'til I finished and it was dawn."--Anne McCaffrey

Summers span decades. Winter can last a lifetime. And the struggle for the Iron Throne has begun.

As Warden of the north, Lord Eddard Stark counts it a curse when King Robert bestows on him the office of the Hand. His honour weighs him down at court where a true man does what he will, not what he must … and a dead enemy is a thing of beauty.

The old gods have no power in the south, Stark’s family is split and there is treachery at court. Worse, the vengeance-mad heir of the deposed Dragon King has grown to maturity in exile in the Free Cities. He claims the Iron Throne.

Curious Epicure
5,0 van 5 sterren Highly recommended whether you are watching the series or not. Awesomely brilliant.
29 mei 2016 - Gepubliceerd op Amazon.com
Geverifieerde aankoop
I was sitting next to a young woman reading on a plane who was reading this. She told me that she liked it much better than the series. That it was well-written and hard to put down. She specifically mentioned that it had very little of the gratuitous sex that seems to pervade the TV show. On her recommendation, I bought the book and completely agree with everything she said.
Even though it is difficult not to imagine the faces of the actors when reading the book, it is still an awesome read. Much more detailed than the series, but also enhanced by it to a certain extent.
Brilliant writing.

B. Wilfong
5,0 van 5 sterren "We all do our duty when there is no cost to it."
5 augustus 2017 - Gepubliceerd op Amazon.com
Geverifieerde aankoop
So I finally caved and read “A Game of Thrones”, despite the fact that I insist that I am not a fantasy guy. I will admit it. I really enjoyed this book. It kept my attention and I found myself wanting to go back and read it!
It is a big book, many people, have said many things about it. Here are some of mine:
• The characterization is really good. There are defined personalities and traits and Mr. Martin usually conveys them without a superfluous amount of words.
• The alternating points of view chapter by chapter. This device allows the reader to take in the massive scope of the story that is being told here in manageable chunks. I hope this style continues thru the series.
• The large arc of the story. Mr. Martin has created world here, with a complete and rich history.
• The novel is unapologetic. By that, I mean there is rampant sexism, violence, etc. Not pretty elements, but the author is not casting a modern eye on them apologizing for every undesirable trait. This is an ancient world, not like our own. He allows that story to happen without foisting modern sensibilities on it. I appreciate someone just telling a story and letting the actions speak for themselves. You are disgusted or titillated by what the characters are doing based on how you view the world.
That is a quick overview, but some of the highlights. I will say, the overlong descriptions of clothing and food I could do with a little less of, but it is a small quibble, and I have friends who love that aspect of the book, so there ya go.
I will be continuing this journey through the Seven Kingdoms, but I am not sure when. My “to read” pile is massive enough as it is.
Meer lezen
120 mensen vonden dit nuttig
Vertaal recensie in het Nederlands

Seane797
5,0 van 5 sterren This book is for anyone who loves a gripping story -- no exceptions.
22 juni 2015 - Gepubliceerd op Amazon.com
Geverifieerde aankoop
What could be said about Game of Thrones, the first of George R.R. Martin's epic series, that hasn't been said a million times? It's absolutely brilliant. Going into these books (I read them after the show began but before I'd seen the show...), I enjoyed my share of sci-fi/fantasy along the lines of Harry Potter, Buffy the Vampire Slayer... fairly light-hearted stuff (in comparison, at least) that always felt grounded in the same world I live in. The one genre I really disliked was "Middle Ages Fantasy" as I called it. Lord of the Rings, for instance, while the films were visually appealing, was not my cup of tea... too detached from reality. So when I first saw articles and clips from the HBO Game of Thrones series, I thought it looked like the one type of fantasy series that I would never enjoy. I held out for a looong time, until 3 different friends of mine with similar tastes in books/shows/films promised me that, while they too disliked this sub-genre of fantasty, this series was different, and I HAD to read the books or start the show. Grudgingly, I picked up the first book, figuring that I'd push myself half-way through it and let me friends know I tried and they were totally wrong.

Of course they weren't wrong.

What George R.R. Martin has done here defies genre, period. It doesn't matter if you're like me and don't care for this sub-genre of fantasy... it doesn't matter if your like my spouse, and don't like fantasy at all. If you enjoy brilliant, incredibly-developed, thought-provoking stories... those with a strongly developed cast of characters who blissfully lack being "good vs. evil" and instead all display their shades of grey, good traits, evil traits, unique traits, all sorts of traits... then this book is for you. Buy it. Open it up. Start reading. You won't regret it.
Meer lezen
462 mensen vonden dit nuttig
Vertaal recensie in het Nederlands

Missy S.
1,0 van 5 sterren Poor quality materials
7 februari 2019 - Gepubliceerd op Amazon.com
Geverifieerde aankoop
The story is amazing, but my 1 star is in regards to the quality of the book itself. My hands are black every time I read it, the cover does that. The letters change font sizes occasionally for no reason, the line looks squished - it’s a printing problem. There have been letters cut off or extra bold like the ink was a problem. Buy elsewhere if you want the book to last more than 1 reading.
Meer lezen

Amazon Customer
5,0 van 5 sterren I finally see why everybody is soooo crazy about it!
26 januari 2019 - Gepubliceerd op Amazon.com
Geverifieerde aankoop
For years, people have rambled on and on about GAME OF THRONES, and all the while I was not interested. But after many cast interviews, and observations of the political goings-on, I thought, "Alright! ALRIGHT! Let's see how they did." But before I could watch the first few episodes of the first season, I had to read the first book. And that's exactly what I did! And you know? It was most rewarding. Personally, for me, reading about Arya Stark turned out to be more fun than watching her on the show. Same goes for Jon Snow and Lord Eddard Stark. But the one that I was really hooked on, next to Snow, was Tyrion Lannister. An educated soul among a very masculine, not-so-educated family. I really can't understand how I did not hear of A Song of Ice and Fire when it was out in the 90s. I CANNOT!! Anyway, after reading far enough into the book, I started the series. And the rest is history. It is way beyond The Wizard of Oz. No disrespect intended.
Meer lezen
25 mensen vonden dit nuttig
Vertaal recensie in het Nederlands
Ga naar Amazon.com om alle 10.179 recensies te bekijken 4,7 van 5 sterren
Terug naar boven
Over ons
Verkoop bij ons
We helpen je graag
© 1996-2020, Amazon.com, Inc. en dochterondernemingen