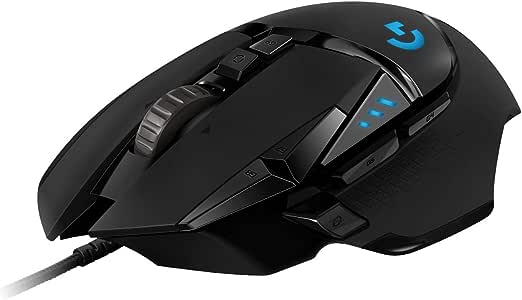 Chris McGuinn
5,0 van 5 sterren Amazing Mouse for Pros and Gamers
4 maart 2020 - Gepubliceerd op Amazon.com
Naam van patroon: G502 Hero Wired (speciale editie)Stijlnaam: EU-versie.Geverifieerde aankoop
I finally had to bite the bullet and buy a new mouse after my old wired Logitech gaming mouse died after over a decade. Probably a good/combined 8hrs/day over that 10 years it was used for work and gaming (lets see how this one holds up ;P). The ergonomics of this mouse are far superior to my old one. I could never "naturally" reach the extra/furthest thumb button on my old one which made it only useful for working, terrible for gaming.

Yet on this mouse, every one of the thumb buttons are placed naturally. Well, TBH, 4 of the 5 are. The 5th (the solo one between the upper and lower pairs) is a little bit of a stretch for my thumb, but doesn't compare to the stretch on my old mouse. Might also have to do with how I hold the mouse. I normally/naturally don't "cup" it around my whole hand. I usually "claw" it and hover over it reducing the hand span.

The customization via the program is amazing and extremely versatile. I've already programmed specific buttons for various different profiles including Sketchup, AEC Collection software, 3D renderers, etc. Also, the ability to customize the overall weight is GREAT. Initially, I never thought this would be something I'd toy with but for work, I love having all of the weights in as well as loving the "toggle" between clicks/steps on the scroll wheel and changing it on the fly to "free-wheeling" and smooth. Yes... That's a feature, it's not "broken"...

I primarily bought this for my home PC but loved it so much, I just bought another one for my office PC. Coupling this with my 3D Connexion SpaceMouse at the office for modeling has been nothing but great.
Meer lezen
2 mensen vonden dit nuttig
Vertaal recensie in het Nederlands

Brandon
4,0 van 5 sterren Great Mouse Over All! Unless, you have large hands.
18 april 2020 - Gepubliceerd op Amazon.com
Naam van patroon: G502 Hero Wired (speciale editie)Stijlnaam: EU-versie.Geverifieerde aankoop
This mouse works fantastic. Some of the main highlights is its accuracy, easy to click, the added weights, but also, the mouse wheel. I really love how the mouse wheel can unlock to scroll fast and freely through pages. My only problem is the Ergonomics, its not that comfortable to hold on too when you have big hands, I feel like I have to take a break from it once in awhile.
Meer lezen
3 mensen vonden dit nuttig
Vertaal recensie in het Nederlands

Dakota
5,0 van 5 sterren Great for gaming.
13 mei 2020 - Gepubliceerd op Amazon.com
Naam van patroon: G502 Hero Wired (speciale editie)Stijlnaam: Duitse versieGeverifieerde aankoop
The Logitech software is very buggy and it is slow to start so u will need to wait a few minutes before you can use your mouse when the PC starts. That's pretty annoying. Also the buttons to change DPI don't want to work a lot of the times. Using the official software and drivers from the Logitech website. I'm hoping an update eventually fixes these problems because when it wants to work this thing is amazing.
Meer lezen
Vertaal recensie in het Nederlands

D. McCarthy
5,0 van 5 sterren Awesome for gamers
1 januari 2020 - Gepubliceerd op Amazon.com
Naam van patroon: G502 Hero Wired (speciale editie)Stijlnaam: EU-versie.Geverifieerde aankoop
My son loves this mouse. He is an avid gamer and has always complained about the functionality of other gaming mouse(s) he has used in the past. This was a great price and great product
Meer lezen
Een iemand vond dit nuttig
Vertaal recensie in het Nederlands