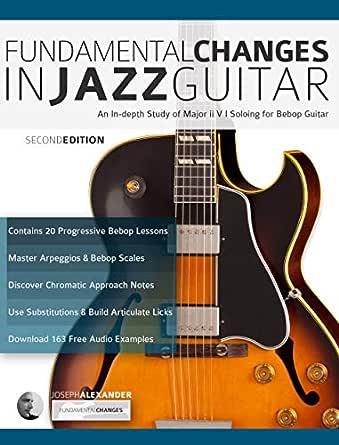 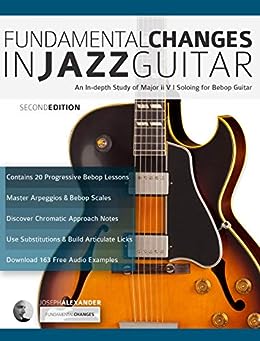 R.B.
5,0 van 5 sterren Superior presentation
27 augustus 2015 - Gepubliceerd op Amazon.com
Geverifieerde aankoop
Years ago, I bought books describing the CAGED system, hoping to learn scale and arpeggio patterns. I got what I expected, but the information was presented without a sense of direction. "Memorize these patterns, then mimic recordings of your favorite guitarists, and you'll be alright" was the extent of it.

Joseph Alexander has solved the puzzles for me. In this book (ii-V-I), he begins by introducing minor 7 arpeggios, dominant 7 arpeggios and major 7 arpeggios. Three different arps, integrated into one melodic line. Rather than telling the student to "memorize the arps and make music," Joseph wants the student to identify all roots, all 3rds, all 5ths. He points out that a solo can begin on any of those scale degree tones, therefore don't lock yourself into the belief that you must always start on the root and resolve to the I - in fact, the unresolved tension leading into a chord change is what makes solos more interesting, more compelling.

Later, Joseph introduces chromaticism. This is where music becomes jazzier, the music I enjoy most.

Different people learn differently. Not to disparage the authors of those other books, but their formats weren't the best for me. Joseph Alexander opened up a different and better way of thinking for me. He writes with clarity and precision, with excellent advice about one's approach to studying and practicing.
Meer lezen
9 mensen vonden dit nuttig
Vertaal recensie in het Nederlands

Joseph Rushinski
5,0 van 5 sterren Fundamental Changes in Jazz Guitar: A Winner
27 mei 2014 - Gepubliceerd op Amazon.com
Geverifieerde aankoop
Fundamental Changes in Jazz Guitar – An in Depth Study of Major ii-V-I Bebop Soloing is the first book by Joseph Alexander I have purchased. I have studied music theory and played guitar off and on for over 40 years and have accumulated an array of study material. I recently wandered into the jazz genre and must say this book ranks right up there with Mickey Bakers’ two jazz books. Although I have just purchased Bebop Soloing, at a few days glance I can say it is very nicely paced and covers everything you need to know. Some books start off in baby steps and a few pages later you’re trusted into the vast world of arpeggios, scales, modes with quick overviews of each and lots of licks to learn from. Unfortunately, you are totally confused by all the “rules”. These authors try to explain what you’re doing but Alexander accomplishes this task. If you really want to understand arpeggios, guide tones, and the tritone substitution (5 lessons) this is the book to buy. I particularly like the fact that Alexander provides a pdf copy of the Kindle Edition books after your purchase. At [...]-changes you can view the array of books available from blues to jazz to CAGED to sight reading, etc. If you find your present books seems to leave you wondering, I suggest you purchase at least one of his books to take a look at. At $7 each I’m sure you will not be disappointed. These books are for everyone. I have to give Bebop Soloing an EXTRA star because I am so pleased I found this web site and purchased this book. I intend to accumulate many more of his books.
Meer lezen
7 mensen vonden dit nuttig
Vertaal recensie in het Nederlands

John Lovett
5,0 van 5 sterren Fundamentally Sound
2 juli 2016 - Gepubliceerd op Amazon.com
Geverifieerde aankoop
This one of very few books that I would deem worthy of handing down to younger folks aspiring to improve on something they already love to do.....play and master guitar at an enjoyable level. I haven't gotten through the entire 20 lessons yet, but look forward to more of Mr. Alexander's approach with each lesson. Money well spent on something I actually can use.....Kudos
Meer lezen
4 mensen vonden dit nuttig
Vertaal recensie in het Nederlands

Steven McPeak
5,0 van 5 sterren I needed this book!
28 februari 2017 - Gepubliceerd op Amazon.com
Geverifieerde aankoop
I studied jazz guitar back in the 80's with a local teacher. I learned chord soloing, but was not able to get fully into single note soloing like I wanted too. Arpeggios were the hardest thing for me to learn. I wish I had this book back then. Using this book as accelerated my jazz playing greatly. Being able to use chord tones and scales has added more variety to my playing. Work with this book and the audio files, it will take time but any thing worth while takes time.
Meer lezen
3 mensen vonden dit nuttig
Vertaal recensie in het Nederlands

Martin P McGrath
5,0 van 5 sterren Excellent book!
11 augustus 2017 - Gepubliceerd op Amazon.com
Geverifieerde aankoop
A very well thought out and methodical approach to a very complex subject. Joseph provides the lessons in discrete "bite-size" portions that allow you to incorporate the material at your own pace. At a certain point, I found that concepts that had eluded me started to become clear. I do agree with other reviewers that mentioned that the examples are all given in basically the same position on the fret board, which doesn't always seem to be the most convenient position for a particular lick, but it does make sense that a good part of the readers learning will come from translating those examples to other parts of the fretboard that are more comfortable or familiar to the reader. This book is well worth your time.
Meer lezen
Vertaal recensie in het Nederlands
Ga naar Amazon.com om alle 111 recensies te bekijken 4,9 van 5 sterren
Ontdek het beste van shopping en entertainment
Gratis en snelle bezorging van miljoenen producten, onbeperkt streamen van exclusieve series, films en meer
> Ontdek Prime
Terug naar boven
Over ons
Verkoop bij ons
Amazon-betaalmethoden
We helpen je graag
© 1996-2020, Amazon.com, Inc. en dochterondernemingen