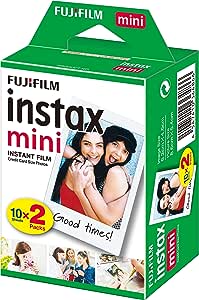 “instax mini” film is for all instax mini cameras and comes in a handy cartridge. It offers stunning instant pictures that you can fit into a purse, wallet or mini photo frame. instax film ensures sharp, clear reproduction, vivid color and natural skin tones.

This film is NOT for the Fujifilm Instax 210, you'll need the WIDE version of this film.

The pricing of these film is slightly higher than traditional shoot-develop-print film, but the "instant" film is increasingly coming back to popularity. Feeling nostalgic over polaroids? These are pretty much the same. Plus would you rather wait seconds for film to develop or drive to a photo studio to have it developed for an hour?

Also, don't forget that there are different number packs of film; a 20-pack, a 50-pack, and a 100-pack. Make sure you know how much your are paying for each single film by using this equation: price of the pack divided by total number of films in the pack (example: 13.40 divided by 20).

The films above are plain white films and the cheapest. If you're interested on having designs pre-printed on the film there are a few designs like Rainbow,Rilakkuma,Stained Glass,Dalmatian,Shiny Star,Comics, Mickey and Friends, and Pooh.

This system is great for parties, outings, and random occasions for all ages!

Before everything, please READ THE INSTRUCTIONS if you haven't yet!

Tech Nut
5,0 van 5 sterren Film Works Perfectly Every Time
20 maart 2016 - Gepubliceerd op Amazon.com
Stijlnaam: 20 x Instax mini-film.Geverifieerde aankoop
My kids have had a ton of fun with their Instax camera. The film is easy to load and we have not experienced any issues with it misfeeding or not developing correctly. It is fun being able to share technology from my childhood with my kids, especially when it actually works! I am giving this product 5 stars because it works perfectly and the price here on Amazon makes it affordable. Highly recommend both the camera and the film for anyone looking for an instant camera. This is definitely a winner!
Meer lezen
10 mensen vonden dit nuttig
Vertaal recensie in het Nederlands