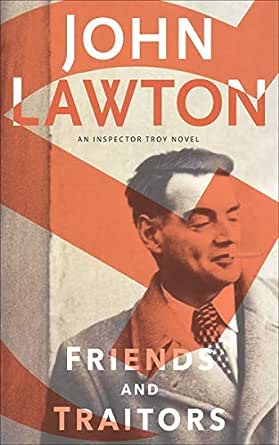 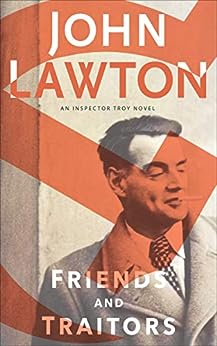 London, 1958. Chief Superintendent Frederick Troy of Scotland Yard, newly promoted after good service during Nikita Khrushchev’s visit to Britain, is not looking forward to a European trip with his older brother, Rod. Rod has decided to take his entire family on “the Grand Tour” for his fifty-first birthday: a whirlwind of restaurants, galleries, and concert halls from Paris to Florence to Vienna to Amsterdam.

But Frederick Troy only gets as far as Vienna. It is there that he crosses paths with an old acquaintance, a man who always seems to be followed by trouble: British-spy-turned-Soviet-agent Guy Burgess. Suffice it to say that Troy is more than surprised when Burgess, who has escaped from the bosom of Moscow for a quick visit to Vienna, tells him something extraordinary: “I want to come home.” Troy knows this news will cause a ruckus in London—but even Troy doesn’t expect an MI5 man to be gunned down as a result, with Troy himself suspected of doing the deed . . .

“The surprises keep coming, not merely up to the last chapter but even to the novel’s very last line.” —Pittsburgh Post-Gazette

“A beguiling interpretation of [Guy] Burgess’ life both before and after his defection in 1951.” —Booklist (starred review)
click to open popover

Joost Boswijk
3,0 van 5 sterren Too long
16 november 2018
Geverifieerde aankoop
There’s not much of a plot in this book. Just messing around with some historical characters. My real objection I won’t give, because it’s a spoiler, but let me say it’s all quite unlikely. Rather a waste of time.
Meer lezen
Nuttig
Commentaar geven Misbruik melden
Vertaal recensie in het Nederlands
Alle 1 klantenrecensies bekijken
Klantenrecensie schrijven

Kenneth C. Mahieu
5,0 van 5 sterren Hurray ! Troy is back. More please, more, more, more
26 oktober 2017 - Gepubliceerd op Amazon.com
Geverifieerde aankoop
Troy is back ! Just when you thought you'd never see another Freddie novel he arises for his 8th adventure, "Friends and Traitors" (FT) - thank you John Lawton. Lawton wrote seven excellent Troy novels from 1995-2010. The 2010 book, "A Lily of the Field", felt like the curtains closed for a final time. I feared Troy had drifted away to the same literary cemetery as Lisbeth Salander, Bernard Samson, George Smiley, Mitch Rapp, Peter Guillam. But no, there has been yet another resurrection. Maybe there's still hope for more.

The series is set mostly in London and environs from the late 30's to the very early 60's. Troy is a detective on the murder squad, perhaps responsible for a murder or two of his own. What set the series apart for me was the London WWll settings, the bombings, the blackouts, underground shelters, the dignity and resolve of the Brits, and the convoluted plots. Troy is a son in a successful, monied, Russian ex-pat family. Brother Rod is a high ranking member of the Brit government. Dad ran an influential journal and knew everybody. Brit PMs were frequent cast members, often guests at dinner , like Harold MacMillan. Troy also had opportunities to meet with Joe Kennedy, Winston, Nikita.... And then there are Freddie's twin sisters, Sasha and Masha, fun girls who still like to roam the mansion late at night naked as the day they were born. And sometimes the three of them go a bit too far.

The Troy series is an incredible bowl of spaghetti. You might be reading merrily along and find that the story has leapt ahead five years, then back eight years and a character is introduced whom you know will die because she died in the previous book. Lawton began another series in 2013 with a character named Joe Wilderness, who plays a role in guess what? yes FT. Unfortunately, The Wilderness books didn't interest me all that much.

So what's FT about? Guy Burgess of all people, as in Burgess, Maclean, Philby, the notorious spy triple of England 50s and 60s. Troy meets Guy at the house, at a dinner party of course, and doesn't much care for him. Guy makes little secret of the fact that he is "queer" and Troy quickly establishes that he is not. As a matter of fact, Troy dates a number of vibrant women in this book just as he has in the other seven. His marital status is unclear; technically he is still married to Tosca who may or may not be a spy for the Russians. Troy hasn't seen her for almost two years. Guy enjoys guys and lots of booze, lots. Troy and Guy keep bumping into each other in popular members only clubs of varied repute over the ensuing years, and it's clear that although Burgess may be a spy he doesn't seem capable of doing much harm and after all, whom would you tell? On a somewhat spur of the moment moment Guy and Maclean defect, then soon go their separate ways.

Sometime later, Troy becomes aware that Guy misses London and wants to come back. And the story gets even more interesting. I enjoyed FT very much, it's 4 1/2 stars, and I hope there are more to come. FT doesn't quite maze all around like the first six Troys and that's unfortunate, I still enjoyed the trip back in time. And before too long I will probably reread the whole series, maybe in order this time.
Meer lezen
3 mensen vonden dit nuttig
Vertaal recensie in het Nederlands

Michael F.
5,0 van 5 sterren John Lawton belongs alongside Le Carre.
17 november 2017 - Gepubliceerd op Amazon.com
Geverifieerde aankoop
As a British author of espionage and crime literature Lawton is often named alongside Philip Kerr and Alan Furst. I am a fan of both those talented, accomplished writers, buy and read their books, but Lawton is in a different category. His Fredrick Troy chronicles recreate a period of time from the late 30’s through the late 50’s with remarkable depth, realism and even romance somehow tied together with his eclectic musical tastes. In Friends and Traitors Lawton pulls lose ends together around a fictional retelling of Guy Burgess and the Cambridge Five spy ring. Many of the familiar characters from the Troy saga from Tosca to Wilderness appear on stage if only briefly as Lawton pursues a Thomas Wolfe like “you can’t go home again” theme for Troy and Burgess. Great stuff from a master artist.
Meer lezen
Een iemand vond dit nuttig
Vertaal recensie in het Nederlands

E. M. Young
4,0 van 5 sterren Troy, Family And Friends Cope With A Spy
14 november 2017 - Gepubliceerd op Amazon.com
Geverifieerde aankoop
I like the way Lawton weaves the stories of Troy, his law enforcement colleagues and dysfunctional family around (mostly) historical events and characters. This time it's the famous Soviet spy in the heart of British Intelligence (I think they were all Soviet spies) who just happens to be an almost friend of Troy and who gets him entangled in a domestic and international mess. The plot is fine and, needless to say, Troy will sort it out, chips falling where they may. But mostly it's Troy and his relationships that make it interesting. One more thing: the time frame of the action is about 20 years and a lot of the events were recounted in other Troy books. At times it actually felt like deja vu, which I sometimes found disconcerting. Overall, though, a good read.
Meer lezen
Een iemand vond dit nuttig
Vertaal recensie in het Nederlands

Arturo Kreznick
4,0 van 5 sterren a very good read especially if you've read the others
13 november 2017 - Gepubliceerd op Amazon.com
Geverifieerde aankoop
I think it interesting that Lawton and LeCarre' would write retrospective novels at the same time. In both cases, the present book is more interesting if you've read the prior ones, or in LeCarre's case at least the one, The Spy Who Came In From The Cold. In Friends and Traitors, knowing something about the Cambridge spies is also a help even though the Guy Burgess at the center of the story is to some degree a fiction. Lawton's writing is interesting and well done and the characters interesting and well drawn. I recommend this novel and all the others in the Troy series. I read them out of order, but in order would be the better approach.
Meer lezen
Een iemand vond dit nuttig
Vertaal recensie in het Nederlands

the pygmy scribe
5,0 van 5 sterren Cold War intrigue with a dash of laughter
23 oktober 2017 - Gepubliceerd op Amazon.com
Geverifieerde aankoop
Pour yourself a good Scotch, light a fine cigar and settle back in your reading chair for another adventure with the upper-class, left-wing, dotty, droll Troy family. Its Cold War intrigue will ensnare our detective and the reader. There are several mysteries to be solved by Chief Inspector Troy in "Friends and Traitors" that will keep you turning the pages, and laughing out loud, until the perfect ending. Guy Burgess has launched a thousand books, yet rarely do we understand what made the English spy tick and run off to the USSR. But in John Lawton's new novel, Burgess breathes again, the very definition of Robert Graves' impossible man: "Self-pitying, dirty, sly, / For whose appearance even in city parks / Excuses must be made to casual passers-by." Burgess' escapades drive the plot -- he's there to amaze, irritate and antagonize Frederick Troy, and bring together all our favorite characters from different Lawton novels, some meeting for the first time. You won't want to miss Lawton's latest.
Meer lezen
Een iemand vond dit nuttig
Vertaal recensie in het Nederlands
Ga naar Amazon.com om alle 43 recensies te bekijken 4,0 van 5 sterren
Terug naar boven
Over ons
Verkoop bij ons
We helpen je graag
© 1996-2020, Amazon.com, Inc. en dochterondernemingen