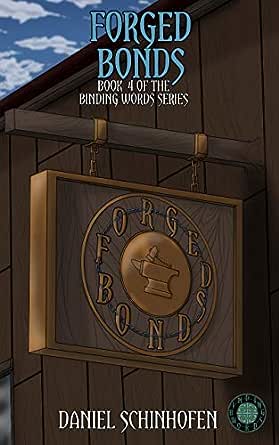 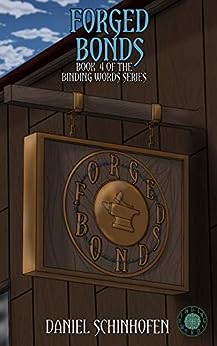 Sean and his Bonded settled in Hearthglen to learn, train, and grow. Taking on an apprentice, setting up his shop, and Bonding both Chastity and Andrea to him, Sean felt like he would finally be able to learn about this world and try his hand at new things.

Sean stepped on some toes as he tried to find his place in the city, but by ignoring conventions, he friended smith and Shaper alike, forging friendships across the divide. The newly formed alliance discovered common ground when opposition rose up to hinder them.

Sean never anticipated the assassins that came for him and his Bonded. With Ida paralyzed and Ryann killed in front of him, Sean lashed out. He killed the attackers, healed Ida, and pulled Ryann back to the world of the living.
Guards rushing toward them, Sean had decisions to make— ones that could shake the very foundations of Hearthglen, and maybe the world.

(This work contains adult situations that some might find offensive, the least of which is graphic sex. This book is about an Overpowered MC, and contains a harem. You’ve been warned.)

Jake P
5,0 van 5 sterren Story, plot, progress!
20 januari 2020 - Gepubliceerd op Amazon.com
Geverifieerde aankoop
The problem so many authors have is that they continue to add new items/ideas/systems in every book as often as they did in the first in the series. This practice is unsustainable and leads to ideas being forgotten or overshadowed. This book did not do that and did an excellent job of advancing the plot and fleshing out the existing world mechanics.

Our MC is still overpowered but it's not thrown in our face at every turn. He's learned to temper himself and invest more in others. The business is continuing to thrive and even expanding, but not in a 'wow, that was easy' kind of way, which makes it very enjoyable.

We've been given more background on some of our supporting/side characters and the world has been expanding at a calm, controlled pace. For me, many characters went from liked to loved or disliked to hated as, I would imagine, the author designed. There were a few development surprises in there as well, and I enjoyed them quite a bit.

All in all, this was an amazing continuation of the series with minor and appropriate additions. We can see what's coming down the road, but there's enough fog in the air to present no small number of surprises along the way. Ready to pre-order book 5!

Chuck K.
5,0 van 5 sterren Set down a novel I'd already started to read this when I saw it was out!
21 januari 2020 - Gepubliceerd op Amazon.com
Geverifieerde aankoop
…And it was a novel I'd been long looking forward to by an established, mainstream SF author I've been an avid fan of for decades. If that doesn't convey how greatly I'd been anticipating this latest installment in the Binding Words series, I'm not sure what will.

While I enjoyed the Alpha World series, am looking forward to the next Apocalypse Gates book, and have greatly enjoyed Mr. Schinhofen's other works; Binding Words has quickly become my favorite of his series. I find myself checking his blog repeatedly to see if there's an update to see when I can get my next fix of Sean and his ladies.

Given the anticipation with which I awaited this latest installment, it wouldn't be odd to be disappointed by the actual novel. But the only disappointment I felt as I skimmed through his Author's Note at the end of the book was that there wasn't more to read and that I'll have to wait a few months for yet another dose. And while I have plenty of other books in my queue to help ease my jones, I'll still be waiting for that next fix as avidly as any junkie. ;P

DJ Johnson
5,0 van 5 sterren Great sequel!
22 januari 2020 - Gepubliceerd op Amazon.com
Geverifieerde aankoop
So this was another great sequel to binding words personally i think it's his best work! This book continue with sean and co right from where book 3 ended. More innovation, more alliances, more training and of course more romance and character development for everyone. Sean is less dense in this book and more accepting of getting more wives even though the struggle with his world views are there and each of his wives get personal time with him thats lovely. If you love slice of life goodness here's one of the top book series!
Meer lezen
2 mensen vonden dit nuttig
Vertaal recensie in het Nederlands

Mvargus
4,0 van 5 sterren Just look at the number of reviews
27 januari 2020 - Gepubliceerd op Amazon.com
Geverifieerde aankoop
Daniel appears to either have a great following, or something strange is happening. By the time I got my copy of this book there were more than 150 reviews and the majority were 4/5 stars.

Now I don't ever recommend just glancing at the stars and purchasing, but this is book 4 in a series, so to get that many reviews suggests that a large number of people are enjoying reading these books. And that is something I can happily confirm. This series is great fun.

Yes, the hero is in many ways very overpowered, but while he does at times feel like a Gary Stu, the story gives him enough challenges outside of his power set that he manages to maintain a level of "humanity" that other overpowered characters lose.

This story did seem to stall a bit. Books 1 and 2 involved a lot of travel and growth with just Fiona and Myna as companions for our hero. But he stays in Hearthglen for all of this book, and while that does show him gathering more allies, it also meant that his antagonists were a bit limited.

Overall, this was the fourth book in a series that I enjoy for the characters and challenges they are seeing. it's just a good read.
Meer lezen
Vertaal recensie in het Nederlands

jkiac
2,0 van 5 sterren disappointing
22 januari 2020 - Gepubliceerd op Amazon.com
Geverifieerde aankoop
I've loved this series so far but this installment is weak. the MC becomes a magical plumber. there are WAY too many characters that are addressed by just their first names making it difficult to keep track of them. and the author has fallen into the trap that many "harem" writers do, namely, adding too many wives too fast. we get it. the guys a catch! but just because a girl is interested doesn't mean you have to add her to the family.
Meer lezen
2 mensen vonden dit nuttig
Vertaal recensie in het Nederlands
Ga naar Amazon.com om alle 254 recensies te bekijken 4,8 van 5 sterren
Terug naar boven
Over ons
Verkoop bij ons
We helpen je graag
© 1996-2020, Amazon.com, Inc. en dochterondernemingen